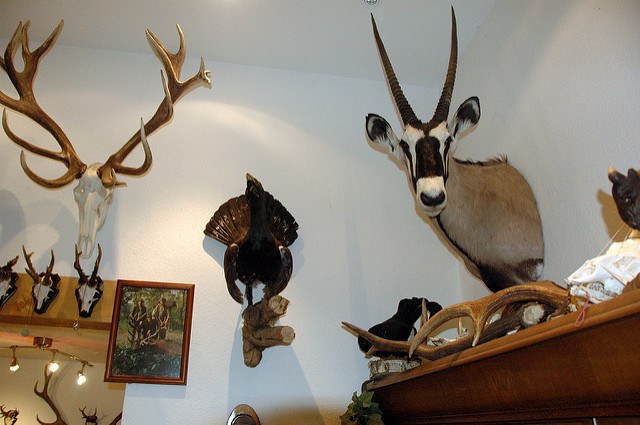 Savvy hunters know the importance of keeping their prey from seeing them. While animals don’t have the highly developed thought processes of humans, they do recognize us and have learned to be wary of us, especially during hunting season. Hunters use a combination of strategies, such as wearing camouflage, to make themselves less visible to the game they are hunting; but nothing beats a shooting house for giving the hunter a comfortable way of hiding from their prey.

Shooting houses are especially useful in parts of the country where people hunt on private land, rather than hunting national forests or other public land. Private land ownership gives hunters the ability to control who is on their land, as well as the right to build on that land, making it ideal for the construction of a shooting house. Of course, properly made shooting houses are all portable, so that they can be moved around on the property. But even so, you can’t leave one on public land and expect to find it where you left it.

Using a shooting house for deer hunting makes the hunt more comfortable, especially in inclement weather. Much like those who enjoy ice fishing, hunters who use a shooting hut are able to give themselves a more amicable environment, adding seats and heaters to their shelters. With roofs to keep the rain off and walls to block the wind, the hunt becomes much more enjoyable.

How to Build a Shooting House

The process of building a shooting house can be broken down into two basic areas; building the stand or platform and then building the house on top of it. Building the house upon a stand increases your ability to see over tall grass and brush, while hiding you even better from the deer, who don’t tend to look up in search of danger.

Before starting, you need to decide if you are going to build your shooting house at home and then take it to your favorite hunting area or build it on site. While the typical shooting house is too heavy for two men to lift, it can be hauled on a trailer and then pushed or pulled off, allowing it to be built at home. These are usually small enough to make it easy to haul them on a small flatbed trailer or even in the back of a pickup truck.

The design of a shooting house is simple enough that the only power tools you’ll need are a cordless drill, a cordless circular saw and a cordless jigsaw. If you don’t have cordless versions of all these tools, and have a generator, you could still build it on-site.

The average floor size of a shooting house is 4’ x 6’, with a few people making them 8’ long. Floor heights can range anywhere from 2’ above the ground to 8’, depending on personal preference and location. It is best if the shooting house can be made out of pressure treated lumber, to prevent it from being damaged by the elements. But if not, at least the legs, skids and flooring should be.

The first part of the process is building the shooting house stand or legs. You want it to be possible to move your shooting house around, so the stand should sit on skids, making it possible to pull it with a truck, tractor or large ATV.

Start out by deciding the overall dimensions of your shooting house. A four foot by six foot one is big enough for two hunters to sit in comfortably. For a single hunter, you can get by with four foot square. Three hunters together is a bit cramped, but can be done if you make it four foot by eight. The four foot dimension is important, as that is the standard width of a sheet of plywood.

All you need for the skids is 2”x 6” or 2”x 8” pressure-treated dimensional lumber. If the ground where you hunt tends to be soft, I’d go with the 2”x 8”s, to prevent the stand from sinking in. Angle cut or radius the ends of the skids, to make it easier to pull over the ground. This angled or radiused portion needs to stick out beyond the uprights, so if you are making a 4’ x 6’ shooting house, use 8’ long skids.

Lay the skids on their sides and attach 4”x 4”s for the uprights. These should be pre-cut for the overall height of the floor. You want to attach them to the skids with lag screws, keeping them a couple of inches up off the bottom of the skid, so that they don’t hang up on the ground when you are moving the shooting house. Use a carpenter’s square to ensure that they are exactly perpendicular to the skids.

Remember when spacing the uprights that you will be putting a 2”x 4” frame around them. So, if you are making a 4’x 6’ shooting house, you’re going to want to space them 5’-9” apart, leaving three inches of space for the 2”x 4” framework.

Standing the skids up vertically, prop them in place, so that you can build the floor structure. With the short four foot span, you don’t need to use anything larger than 2”x 4”s for the floor joists, although if you and your hunting buddies are on the large side, you may want to use 2”x 6”s. Space the floor joists at 16”, as in standard construction.

This floor structure should be framed with the 4”x 4” uprights to the inside of the corners, nailing or screwing through the 2”x 4”s and into the uprights. Add angled corner braces for both sides of all the legs, as an open square is not a stable structure. The angled braces will keep the stand from collapsing.

Finally, cover the floor framework with ¾” plywood. As I already mentioned, I’d recommend pressure-treated wood for this, even if you don’t use pressure-treated wood throughout. The floor, like the skids, is more likely to have problems with decomposition, caused by moisture. If you have 5/4” decking material left over from building a deck, this can be used, instead of the plywood.

Building the House on the Stand

Before starting to build, think through the finished design that you want. Your door should be in one end of the shooting house. Since this is not a home or any other permanent structure, you don’t need to use a pre-hung door, but can instead make one out of plywood. A 30” door is typical, but you can go narrower, if you prefer.

The easiest way to construct a shooting house is with a shed-type roof. This is an angled, sloping roof, as opposed to the two-sloped gable style roof that is typically used on a house. At the low end, you need a minimum of 6 feet of clearance (or a bit more if you are tall). Since we are basing our overall size on sheets of plywood, you can plan on making the high side of the roof eight feet tall, and the low side seven feet, giving you plenty of headroom for tall friends, while ensuring a good slope for runoff.

This means that the front and back walls will be 8’ and 7’ tall. The end walls, one of which will have the door in it, will need to have an angled header, so that it matches up with the roof line. Ideally you should angle cut the ends of your studs, to ensure that they meet up well with the header, but if you don’t it will still work out fine. Just be sure to nail or screw it together firmly.

Your shooting house needs to have windows on all sides, including in the door. These should be sited 3’-6” to 4’- 6” above the floor, so that you can see out of them, while seated. While not absolutely necessary, you might want to consider using a double header above the windows, so as to help keep the headers from sagging over time.

The easiest way to build the shooting house itself is to build the four walls and the roof separately, framing them on the ground, and then assemble them to make the full framework. These are framed just like the walls in a home, with studs at 16” centers. However, it is not necessary to use a double header, as the inside will not be covered with drywall, nor is it necessary to use double studs for the corners, door frames or window frames.

Frame the roof slightly oversize, to the front and back, so that it is easier to attach to the walls. Skin it over, before hoisting it into place, as it will be hard to put the roof on it, once it is installed. There are a couple of different options of how you can skin it. The more common is to skin it with ½” plywood and then cover it will rolled roofing material. But I prefer using corrugated fiberglass panels. While slightly more expensive, you’ll never have to worry about the roofing material coming off and your shooting house leaking.

Skin the shooting house’s walls with ½” plywood or T-111 panels. When doing this, skin the door side first, then cut out the door, before skinning the rest of the shooting house. It is more difficult to cut the door out, if you can’t see the other side to check your cut.

To cut out the door and windows, start by drilling a ½” hole in each of the corners. Mark your lines between these holes and then use a jigsaw to cut the lines. Save the pieces that you cut out, as you can use them as your shutters and door.

The pieces you cut out for the windows and door can be reattached with hinges and simple latches, in order to make your door and shutters. However, I’d recommend framing them on the inside, with 1”x 4” dimensional lumber first, in order to help prevent warping. While it is extra work and may seem unnecessary for a simple structure like this, I would take the time make a lap joint at the corners, for added strength.

Typically, the windows on a shooting house are hinged at the top, allowing then to act as a shade when they are open. To hold them open requires nothing more complicated than a piece of string, running through a hole in the side of the shooting house, above the window. A loop at the end of this string can hook over a nail in one of the studs to hold it.

Of course, you could go a bit fancier, putting props for the windows and making a small shelf on the inside of them. That would give you someplace to set your coffee cup, while you’re hunting.

The last thing you’ll need is a ladder or stairway to get it. This can be made out of 2”x 4”s and attached to the ends of the skids and the floor framing, making it a permanent part of the structure.

Paint the entire structure with a flat exterior latex paint that matches the foliage in the area where you are going to hunt. Most hunters apply a little bit of camouflaging to their paint job, helping to hide the structure. The idea is to break up the shape, by hiding the straight lines. Neatness is not required and a sloppy camouflage job will actually end up being more effective.