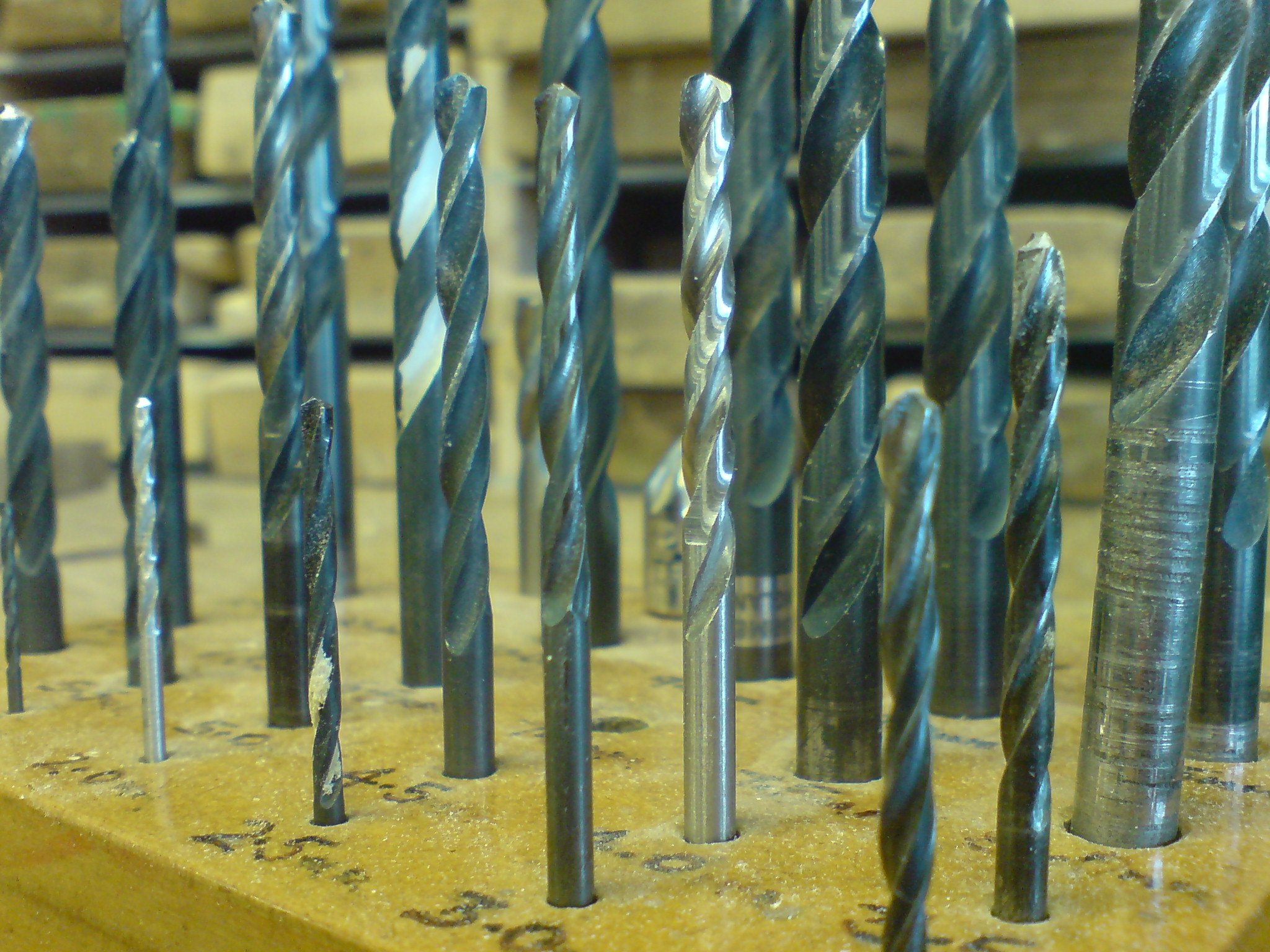 Amongst the many different things that can go wrong while working with wood, is cutting tools getting stuck in the wood mid-cut. But the most common tool to get stuck in wood is a drill bit. This can happen simply because the drill bit isn’t properly tightened in the drill’s chuck, but it usually indicates that the drill bit is dull and unable to cut through the wood.

As a drill bit goes deeper into the wood, more and more surface area comes into contact with the sides of the hole, slowing the bit down. If the cutting tip then encounters a harder area in the wood, such as from a knothole, the bit can jamb up against the wood fibers, stopping it. With small drill bits, it’s not uncommon for them to break at this point, leaving a stub stuck in the wood.

In addition to the amount of surface area in direct contact with the sides of the hole, sawdust from the cutting action will fill all available space in the hole that’s not taken by the drill bit. standard twist drills, brad-point drills and to a lesser extent forstner bits, have spiral flutes cut into their sides, in order to provide a channel for that sawdust to be pushed out of the hole. When it doesn’t push out it can pack into the available area, where the friction will cause it to smolder. I have both forstner bits and hole saws with wood residue that has burnt onto the sides of the cutting tools.

Drill Bit is Stuck, But Not Broken

The best situation is when the drill bit sticks, but doesn’t break. That’s more likely to occur with larger bits, than smaller ones. When it does, the best thing to do is to reverse the drill, in order to see if the drill bit can be backed out. That will be enough in most cases.

There are times when the drill bit is stuck in the wood, but when the drill is put in reverse, the drill spins on the drill shank. This happens when the drill chuck wasn’t adequately tightened and vibration causes it to loosen further. In that case, the best thing to do is to tighten the chuck carefully, so as to not break off the drill bit. Then try reversing it again, backing out the bit.

If the drill bit cannot be removed by reversing the drill, remove the drill from the bit, leaving the exposed bit stuck in the wood. Then clamp onto the drill bit with pliers, preferably vice grips and twist it out in a counterclockwise direction. You can usually get more leverage with the vice grips than the drill can provide, improving the chances of the drill bit coming out.

In softer woods (not softwoods) it can be helpful to rock the drill bit back and forth, slightly, pushing aside the wood fibers, so as to lessen the amount of pressure the compacted sawdust is making against the sides of the drill bit. This won’t work with denser hardwoods however, but could lead to snapping off the drill bit.

The Drill Bit is Stuck and Broken Off in the Wood

The worst-case scenario is when the drill bit is stuck in the wood and has broken off. This is more likely to happen with small bits, which explains why small drill bits are sold in multipacks, rather than individually. Any drill bit smaller than 3/16” has a high chance of breaking off in wood as it gets older, especially if the drilling action ends up taking place at an angle. It’s even worse when drilling through metals.

Before taking any action to remove the broken drill bit, the first thing to do is ask the question whether the drill bit needs to be removed. If it is in a hidden location and another hole can be drilled to do what that hole was being drilled for, it may not be necessary to remove the broken-off drill bit, especially if it broke or is clean with the surface of the wood.

In the case of spade bits which have broken off, it’s easier to grab the broken off part of the bit with needle-nose pliers, sticking them inside the hole on either side of the spade. The broken-off bit can then be grasped and wiggled, moving in a counter-clockwise direction. The bit should come out easily.

If there is nothing sticking up, take a small, pointed tool and try using it to turn the drill bit. Sometimes, the bit breaks off, but isn’t actually stuck in the wood. In those cases, it is actually possible to work the drill bit out of the wood with that sharp tool, turning and rocking the broken-off bit, alternating sides until enough of the drill bit is sticking out to grab it with a pair of needle-nose pliers.

The official answer to this problem is to use screw extractors to remove the broken-off drill bit. That doesn’t work and usually isn’t worth attempting. To start with, there aren’t screw extractors small enough for the small drill bits that get broken off in wood. A number 1 screw extractor requires a hole of 5/64”. For a drill bit to have enough meat along its centerline to drill that sized hole into it, the drill bit has to be at least 9/32” in diameter. That’s a pretty thick drill bit to have broken off, drilling in wood. It can happen in metal, but it’s not likely to happen in wood, no matter how hard it is; and that’s assuming the hole is drilled exactly on the centerline of the drill bit.

The other reason why screw extractors won’t work is that drill bits are made of tool-grade steel, just like the drill bits that would have to drill the hole in them and the screw extractors which would have to get a bite on the inside of that hole, digging into it. Carbide tools would be required to do that. While such tools do exist, they are more expensive and harder to find.

3rd Try – Drill from Back

If the back side of the board that the drill bit is stuck in is accessible, it is possible to drill a hole in the back side of the board, seeking to get perfect alignment with the point of the broken-off drill bit. Care must be taken while doing this, so as to avoid dulling the drill bit being driven into the hole by grinding it against the tip of the broken bit. Once the broken bit is encountered, use a drive pin punch and a hammer to carefully drive it out.

If no drive pin punch is available, one can readily be improvised by grinding the point off of an appropriately sized nail, so that the nail has a flat point, perpendicular to its axis. This flat surface is necessary to mate up with the point of the drill bit, transferring the force of the hammer blows to it. without the flat surface, the nail would just slide off to one side.

4th Try – Cut the Drill Out

This method requires a bit of prior planning, as most woodworkers don’t have the appropriate tool in their toolbox. Woodworker’s Supply carries a tool called a “drill bit extractor” in their catalog (but apparently not on their website). These look like small core drills, about 3/8” and ½” in diameter. They are used with a standard drill-driver. The tool is chucked up and the drill runs in reverse, very slowly to start the cut, with the extractor centered around the broken drill bit. Once the tool has created a groove, it can be sped up, cutting a core around the broken drill bit. The material inside the core is then removed and the drill bit can be pulled out with needle-nose pliers.

Once the broken drill bit has been removed, the resulting hole in the wood can be drilled the rest of the way through and plugged by gluing a dowel into the hole and then cutting it off flush. A new hole can then be drilled where originally intended.

As an alternative to the above-mentioned method, a hole saw can be used to cut out the drill bit, in essentially the same way. As with the drill bit extractor, it’s important to ensure that the pilot bit and the hole saw itself have no contact with the broken drill bit. Even so, the problem here is that the hole saw will cut a much larger hole, which will have to be plugged.

hole saws don’t make as smooth a hole as most drill bits do, so to get a really clean plug might require cutting it out with a hole saw and gluing in a dowel for a plug. Then, once the glue has had adequate time to cure, drill out the hole again; but this time with a forstner bit. A tight-fitting plug can then be glued into the wood, which should not leave any of the gaps that the plug into the hole saw hole did.

As an alternative to using a hole saw to make a hole big enough to grab hold of the broken off drill bit and remove it, the same thing can be done with a small chisel. The risk here is hitting the drill bit with the chisel blade, which will dull it. While chisels can be resharpened, most woodworkers prefer to take better care of them than that. In addition to that risk, the hole created might be harder to fill than a round hole.

If All Else Fails

It is possible that the broken off drill bit creates a situation where the various means of removing the bit are going to create a hole that would be visible in the finished project. This sort of thing is uncommon, but does occur. In that case, it may be necessary to set the piece aside in the scrap pile and make another one.

Remakes are common in woodworking, even in the case of the pros. In fact, I’d have to say that the pros remake more parts than amateurs do, because they have a need for their projects to come out perfect, or at least perfect enough that their customers can’t see the mistakes. Those pros simply look at the damaged part as a learning lesson, then go on to make it again, trying to make it just a little bit better.