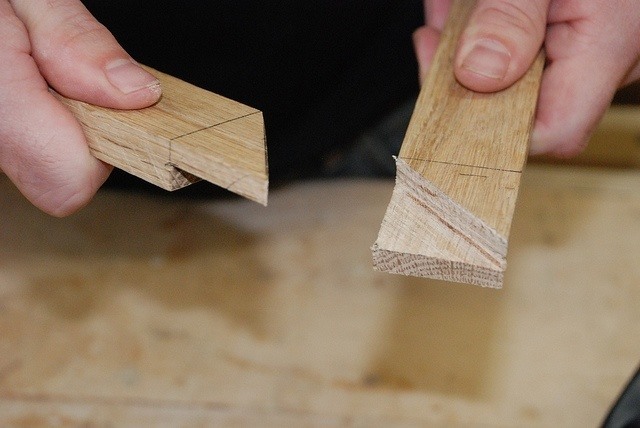 Plywood is useful as both a building material as well as making a wide variety of projects. But what do you do when the project you are working on is larger than a sheet of plywood? In homebuilding, this is dealt with by nailing sheets next to each other, so that the edges of both sheets are on a structural element. But not all projects allow that. Some things, like boat building, require joining the plywood between structural elements (just like slats). They also require that the joint be made in such a way as to turn the plywood structurally into one continuous sheet, as well as providing a smooth surface.

Difference between Scarf and Butt Joints

There are two ways of doing this, both of which are commonly used in boat building; scarf joints and butt joints. The basic difference is that a butt joint allows the edges of the two pieces of plywood to meet each other and be held together by a third piece of plywood, called a scab. In scarf joining, the ends of the plywood sheets are tapered and then glued together, creating a single piece of plywood that is consistent in thickness. It also retains most of the flexibility of the original plywood.

Butt joints are considerably easier to do than scarf joints, but have two distinct disadvantages. The first of these is that they reduce the flexibility of the plywood. So, if you are attaching the plywood around a curve, such as might be done on a boat’s hull or when making a receptionist’s desk for a large office, the joint would cause a flat spot. The other disadvantage is that screws are usually used in the butt joint, which will be visible.

To make a butt joint, a butt block or scarf is cut out of the same thickness of plywood that is being attached. It needs to be wide enough to extend a minimum of four inches on either side of the joint. If thin plywood is being joined, a thicker scarf is usually used.

It is only possible to make a butt joint without screws if epoxy adhesives are used. Epoxy is also useful when the plywood does not have a smooth surface finish, as it is excellent for gap filling. However, most butt joints are screwed, as well as glued.

In the case of thinner pieces of plywood, especially 1/4″ thick plywood, screws should be used which are long enough so that the major diameter of the screw pierces the back of the plywood. The excess screw length is then cut off with a grinder.

To cut the taper for the scarf joint, the two pieces of plywood are marked to show the depth of the taper. They are then stacked, with the edge of the top piece aligned with the marking on the bottom piece. Screw or clamp the pieces down to hold them in place while cutting.

The actual cutting of the taper can be accomplished with a hand or power plane or belt sander. Extreme care must be used to keep the cut and angle consistent. Gaps in the finished joint will weaken it. The final cuts should be made with a jointer plane that has a long base, to ensure that the cut is straight and even.

Once the taper is cut, the sheets of plywood can be unclamped and the top one flipped over for gluing. It is a good idea to put a piece of waxed paper under the glue joint, while gluing and clamping, to prevent the plywood from sticking to the bench top. Either epoxy or resorcinol can be used; however, epoxy is preferred for its gap filling properties.

Coat both sides of the joint with the adhesive and overlay them, being careful to align the two pieces of plywood. The joint needs to be clamped while the adhesive is setting. This can be done by clamping it to the bench top with a thick board on top of the joint (use another piece of waxed paper here) or by screwing through the joint, screwing the plywood to the workbench. It is extremely important that equal pressure be applied all the way across the joint. The holes caused by the fasteners can be filled after the adhesive cures.