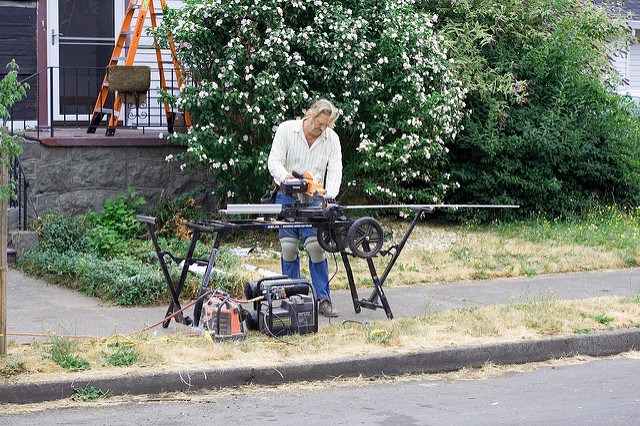 But miter saws have one major limitation, their size. No matter how good a miter saw you buy, it’s got a small table and fence. Table extenders help somewhat with this, but don’t totally make up for the small table size. Of course, there’s good reason for the small table; miter saws are intended to be portable. The larger the table, the harder it would be to take to a remote jobsite.

The tables and fences on these saws are carefully designed to give you just enough space to ensure that your cuts come out the way they’re supposed to. With care, you can make every cut absolutely perfect. But if you’re not careful enough, you’re going to either have some sloppy joints or waste a lot of material. That’s enough of a reason to want a bigger table even if you can only have it when you’re in your workshop.

For this reason, it only makes sense to mount any miter saw to a table extending the saw’s table and fence. You can buy commercial ones, including commercially made ones which are collapsible, but they are expensive. Not only that, but while they do provide a tale for the saw, they don’t provide much else. However, if you make your own DIY miter saw stand, you can not only increase the table and fence size, but build in storage for other tools or materials.

As you probably gathered from my introduction, I have very specific ideas about what makes a good miter saw stand. Without getting into any extras, the stand must provide for an extension of the miter saw’s table and fence. If it doesn’t do that, then it’s not really a miter saw stand, it’s just another workbench, with a miter saw sitting on it.

Notice that I say that both the table and fence need to be extended. There are many miter saw stands, including commercial ones, which only extend the table, without extending the fence. While this does provide support for the material while cutting it, it does not provide adequate support for cutting miters on molding, especially crown molding. That’s the biggest reason to have a long fence on a miter saw.

Any miter saw stand needs to be built in three sections; a center section, which is lower, for the saw to sit in, and two wings which are at the exact same height above the center section as the table of the saw is. This difference is essential and must be exact for the table to accomplish what it needs to, supporting the material. Even a slight difference in this height will affect the angle of the cuts you make, so measure at least three times, not just twice. Overall, you probably want to make it about six feet wide.

The center section is going to have to be slightly wider than the miter saw itself. Don’t try to make a snug fit, because that won’t allow you any room for adjusting the position of the saw. Rather, gives yourself about an extra inch. That’s not so much as to cause a gap in the table or fence that will cause problems, while still allowing you some flexibility for adjusting the position.

Before attaching the fence, bold the miter saw in place. If you want your saw to be removable, for off-site use, then make stop blocks for the saw’s base to sit into and clamp it into place. Just be sure that you have positive location for the saw, so that you can return it to the exact same place repeatedly.

The fence can be made of just about any material, just as long as it won’t warp. I would make an angle out of two pieces of 1”x 4” hardwood or one piece of 1”x 4” and one piece of 1”x 2”. In either case, the face of the fence should be made absolutely straight, without any seams or joints.

To install the fence, attach a straight edge, piece of unbent steel angle or a good straight piece of dimensional lumber to the front of the saw’s integral fence. You can than attach your two fence extensions to this straight edge with clamps, and then mount it to the top of the stand’s wings. Be sure to go into solid material with the mounting screws or bolts, so that the hardware can’t strip out, allowing the fence to move.

If you need a portable miter saw stand, you can make the same basic design, but only putting a base under the lower center section. The wings can then be hinged, with supports, so that they lay against the sides of the base for movement or when not using them. To improve the mobility even more, add casters under the base.

Remember that you have to keep your height accurate on this. Extension wings that aren’t going to line up with the height of the table are going to cause you problems with cutting. Keep the old rule of measure three times and cut once in mind. Dry fit it together a couple of times as well, before screwing the hinges in place.

One way I do this is to turn everything I can into storage space. Any space under tool stands and workbenches is valuable storage space in my book. It’s just a matter of how that space is going to be utilized and what’s going to be stored there. Here are some ideas for you:

Any power tool is going to create a lot of dust and your miter saw is no exception. A well organized and put together workshop can reduce the problems of dust by making use of dust collection. Specifically, in this case, you can mount a small shop vac in the cabinet under the saw, attaching its hose directly to the saw’s dust collection port, allowing the sawdust to be collected each time you use the saw.

To make this more efficient, connect the saw and shop vac to a electrical box with a single switch to control them both. That way, when you turn your saw on, your shop vac will be on as well.

Building in other power tools

If you’re going to be building a mobile workbench for your miter saw, chances are you have other power tools that could use someplace to mount them. One such possibility would be to mount a router table into one end of the stand and a portable table saw into the other, increasing the table area for both of these tools as well. Of course, this would require making your fences movable, but it would be worth it.

Another possibility, without having to make movable fences, would be to use the space on the back side of the miter saw stand, behind the fence. This would be ideal area for mounting a belt sander, grinder or drill press, once again increasing the utility of your workbench space.

If you have portable power tools (and who doesn’t?) you probably have trouble finding enough space to store them, while still keeping them accessible. The space under your miter saw stand could easily be converted to cubbyholes the right size for these tools. I don’t have a miter saw stand like this, but I have a rolling workbench that I have converted in this way, giving me a place to have all my power tools readily accessible, right where I use them.

Adding a power strip to this, you could easily have a charging station for all your cordless power tool batteries or have someplace to plug the powered tools in, when you are using them.

Probably the easiest way to make use of this space is to make it into material storage. You could create a series of cubbyholes, running the length of the stand, to be used for long pieces of molding, tubing and wood. Smaller cubbyholes in the front could be used for small pieces of plywood or useful scraps. You could literally create any configuration you want, making it possible to get the most out of your space and keep your materials readily at hand.

Another good idea is to add a couple of drawers for extra saw blades, drill bits, clamps and other small tools. You can never have too much space for keeping track of your tools.