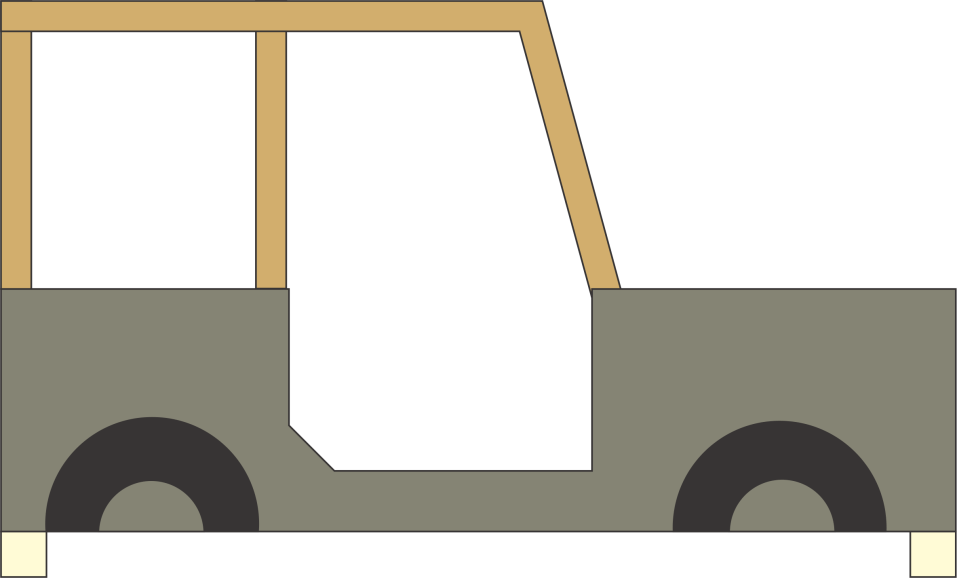 Wooden cars are classic toys, of the type that our granddads and great-granddads played with. They’re the kind of toys which can be made in any woodworking shop, even one with limited tools. Most are rather simple, although there are plenty of examples of some really complex wood cars out there.

It’s natural that toy cars be made of wood, as wood is a beautiful and plentiful material. Many different types of toys have been made of wood through the years; but few have the same sort of connection that cars do. That’s because cars used to be made with a lot of wooden parts.

Wood has a History with Cars

Henry Ford has been credited with really getting the automotive industry off the ground. While he didn’t invent the automobile, he designed and manufactured the first mass-produced one, making it affordable to more than the wealthiest of people. He then raised wages in his factories, creating a middle-class who could afford to buy the cars they were making. He was a true innovator all around.

One surprising thing about Ford’s Model T was at least partially made of wood. The driveshaft (which was made of steel) was manufactured and shipped into the factory in a special wooden crate that looked too large for the part. But once at the factory, the driveshaft was unbolted from the crate, the crate flipped over and the driveshaft bolted back on, turning the crate into the floorboards for the car.

That wasn’t the only wood part in the Model T; or many other cars of that era. While the bodies were skinned in metal, much of the framework that the skins were attached to was made of wood; specifically oak. The high strength of oak made it a natural for the early automotive industry, which needed a material that could be easily formed into complex curves. While these frame parts were eventually done away with and replaced by metal ones, many thousands of early cars contained wood frameworks in the body, for the first few decades of the automotive age.

Even in recent times, we can find examples of automakers using wood frameworks in their cars. The British Morgan cars, products of this century, have wooden body frameworks, although they are built on a steel chassis. The manufacturer claims that wood provides strength, and flexibility, with their research showing that the wood frame made the car safer in accidents.

The “All Wood” Car

Taking the idea of a working wood car to the extreme, a man named Joe Harmon spent five years building a wood supercar, called “The Splinter.” A lifelong automotive aficionado and woodworker, Harmon wanted to see just how much of a car he could build out of wood. So The Splinter started out as a graduate project while pursuing his master’s degree in mechanical engineering. He ended up with a car that is over 90% wood.

Other than the drivetrain and electronics, there is little in The Splinter that isn’t wood. Harmon claims that wood has a better strength-to-weight ratio than either steel or aluminum, making it possible to manufacture more out of wood than people think. Considering that wood is our only naturally renewable building material, which is also 100% biodegradable. For its strength, it requires very little actual energy to produce.

A couple of the more surprising parts to find made out of wood on the Splinter are the wheels, steering linkage, and the springs. The leaf springs of the car are made of Osage Orange, the strongest wood found in North America. Harmon and his team reasoned that leaf springs were little different than longbows, so used the design criteria for a longbow to design and fabricate the springs.

The wheels are each made of 275 separate pieces of wood, along with forged aluminum rims. The wood is laminate together to become the center of the wheel, with the aluminum attached outside. Structural parts of the wheel are made of wood veneer, with decorative sunbursts of walnut on the outside and cherry on the inside, making the wheels as fancy as any “mag wheels” available on the market; but with a unique spin that matches the beauty of this sports car.

The skin of The Splinter is made of a unique wood “cloth” woven of wood veneer on specially designed and built looms, and then potted with epoxy in female molds. While similar to the process used for making fiberglass parts, this is unique in that the “cloth” was made of wood veneer strips, 1/8” to ¼” wide, split from 60’ long strips of veneer. The overall vehicle weight is 1,360 kg, has a 700 hp power plant, giving it a top speed of 386 km/hr.

Let’s Go with Something Simpler

While making something like The Splinter would be fun, the original took five years. That might make it a bit too much of a project to undertake for our kids or grandkids. Let’s stick with something more basic for our wooden cars.

Typically, toy wood cars come out of the scrap bin, as large pieces of wood aren’t needed to build them. Depending on the complexity of the design, a short section of knot-free 2”x 4” or 2”x 6” can be used. For those who want a nicer car, that chunk of 2”x 4” or 2”x 6” can be made by laminating pieces of hardwood together. This can offer the opportunity to make some nice multi-color cars, showing off the different wood grain and color.

For a basic car, the body is a silhouette. Other pieces might be attached, such as bumpers, depending on the design of the car and how complex the woodworker might want it to be. But the only parts which have to be attached to the body are the wheels, which are glued to dowel-rod axles, threaded through holes in the body.

Pretty much any design can be used for the car, as in the patterns above, shown without the wheels installed. Typically, wood cars are made to mimic old-fashioned ones; but there’s nothing that says that newer car designs can’t be used.

The black circles in the patterns above are to represent hole for the axles to go through. Typically, these are ¼”, although any size can be used. Just make sure that the size of the dowel rod matches the holes in the wheels and that the hole in the body is slightly larger, about 1/64”.

An even simpler window can be made by just drilling a hole through the body of the car, ignoring any semblance to realism. That hole should be drilled with either a spade bit, forstner bit or hole saw. Flip the car body over and finish the cut through from the other side to prevent splintering.

To make the car, start out by making a pattern, as shown in the diagram above. If unsure of a design, take a look at pictures of cars and adapt them. Keep the limitations of the tool used for cutting out the profile in mind, when making the pattern. In other words, if a band saw is going to be used, the curved corner can’t be real tight, whereas if a scroll saw is being used, they can be extremely tight.

Wood cars of this sort are rarely painted, although they can be. Usually, they are either finished with varnish or oil. If varnish is used, be sure to sand the body again, especially the end grain, after the first coat is applied, as that coat will probably raise the grain slightly.

It is possible to add a wide variety of embellishments to a toy car. The most common I’ve seen is some sort of spoiler on a race car. But small blocks can also be cut for a truck to carry, ladders added to a fire truck or pieces of dowel rod can be cut to act as exhaust pipes.

More complex car designs can be made by starting out with a basic body, as detailed above and then cutting fenders to attach to the sides, separate roof pieces, to mimic a soft top or a wide variety of tools. trucks are great for modifying, as they can easily be turned into dump trucks, tow trucks or any other sort of work truck.

There are fancier versions of wood cars, which people make out of numerous pieces of wood, much like making a plastic model of a car, but out of wood. Those aren’t as common and really aren’t children’s toys. But they can be fun to make, stretching the woodworker’s imagination.