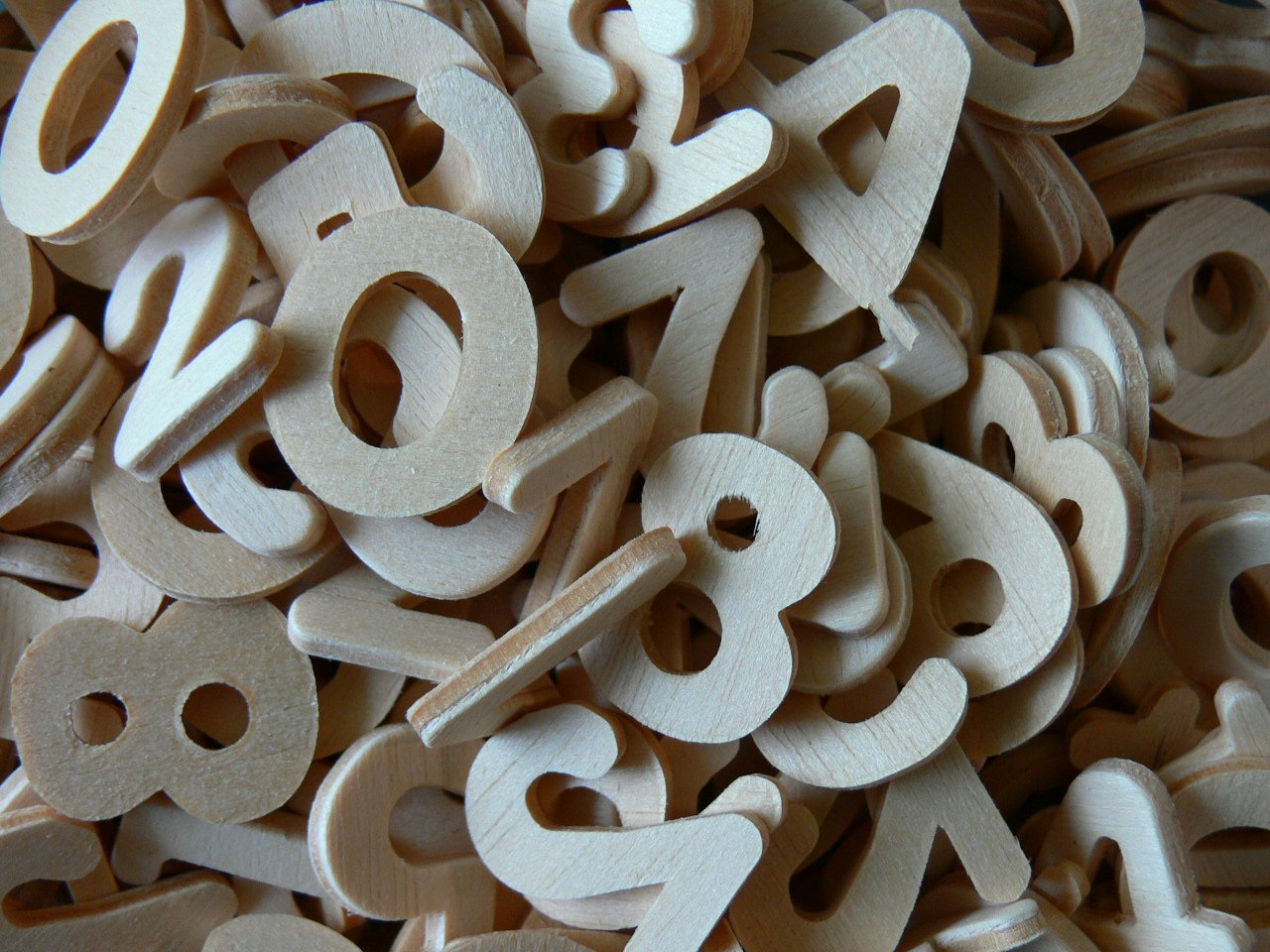 Wood cutout numbers are often used in crafts projects and for décor, mounted directly to the wall. These can be made from a variety of plywood materials, although 1/8” to 1/4” luan plywood is the most common. These can be purchased at a number of locations, such as craft stores like Michaels or Hobby Lobby, as well as home improvement centers like Home Depot.

Today, most of these commercially manufactured letters and numbers are laser cut, although in the past they were predominantly cut with a CNC router or die cut. Each method has its advantages and disadvantages, affecting how the finished letter looks.

Of course, anyone wanting to make their own wood letters and numbers can use any of these methods, if they have the available equipment. But none of those pieces of equipment are in the average home woodworking shop.

The big problem with making one’s own wood numbers and letters at home is laying out the pattern. Most fonts are actually drawn out in large size, with extreme accuracy; then resized for use in our computers and for sign making. One can draw the letters out with a ruler, compass and other drafting equipment, but doing so requires a good understanding of technical drawing.

Another option is to have a sign shop make a pattern on their vinyl sign cutter. This would allow for just about any size letters and numbers that one might want; but it could be rather expensive as well. The material that these sign shops use isn’t cheap and they charge accordingly for their work.

Another, less usual means of creating a pattern is simply to design it on the computer and then blow it up. I used to do this a lot for hand-painted signs and banners. Back when I started, I would create a transparency of the lettering and use one of the old transparency projectors that we used to have in the schools. Since then, I’ve upgraded to a video projector, allowing me to project directly from my computer onto the material that I’m going to be cutting.

The one real problem with using a video projector for this is what is known as “parallax.” This is the effect that happens with a video projector, when the projector isn’t lined up exactly perpendicular to the screen, or in this case, to the plywood that we want to trace our pattern onto. If the projector is high or low of center or over to either side, the image projected won’t be an even rectangle, but rather a parallelogram.

To prevent this problem, careful setup is required. Check the projected image, measuring from corner to diagonally opposite corner. If those measurements are equal, then the projector is set up properly to ensure that all letters and numbers will be the same size. If not, either move the projector or use the projector’s parallax adjustment as needed.

Once the projector is set up and the image is projected onto the material the letters are going to be cut out of, the letters can be traced with a pencil, using a straightedge and compass.

It can be extremely useful to have what’s known as an adjustable curve for making smooth lines for the curved parts of letters. Unfortunately, these are not easy to come by anymore, as few people do technical drawing by hand anymore, preferring to do it on the computer. But a flexible strip of wood can become a fairly good substitute. It may be necessary to have some help to hold the curve in place while tracing the line.

The letters and numbers can be cut out with either a jigsaw or scroll saw. The big problem to watch out for is splintering of the material, while cutting. There are a number of methods that can be used to help prevent this splintering:

Cutting with a Pattern

Another means of cutting out letters and numbers, if a lot of the same will be made, is to first cut out a very accurate pattern out of some sort of plywood product, such as MDF. The fine grain and smooth surface of MDF is ideal for this, but other ply wood products, such as OSB work well too.

With the pattern made, attach it to the surface of the material being cut out, using double-sided masking tape to hold it in place. Then use a straight router bit with a guide bearing to transfer that outline to the wood that will be used for the letters.

Another option that some people like to do with larger numbers and letters is to make them out of wood slats, especially slats of reclaimed wood, such as pallet wood. This can look especially nice if the wood varies in color and condition. Individual slats can even be stained different colors to create a greater difference between them.

For this, start by making a backing board out of some plywood material. This needs to have a neat, clean edge to it, as it will also be the pattern for cutting out the slats.

Lay out the slats face down on the workbench, ensuring that they cover a large enough area for the entire letter or number. Then spread wood glue on the backing board and lay it on the strips of wood, reversed, aligning it to take the best advantage of the slats’ grain and coloring. Check to ensure that the slats are still butted up against each other and that they haven’t shifted, then nail through the backing board into the slats, attaching everything together.

After allowing the wood glue to dry, the outline of the slats can be cut out with a straight router bit, with a top-mounted bearing. Raise the slat assembly slightly off the bench, on blocks, while doing this, so that the bench doesn’t become damaged by the router bit.

Flip the assembly over and round over the edges of the letter or number with a 1/8” or 1/4” roundover bit. Then finish the letters as desired.

Wood letters and numbers are normally mounted to the wall with double-sided foam adhesive tape. This provides a good bond, is unobtrusive and prevents the letters from shifting, like paintings tend to do. Be sure to use enough of the tape so that it can support the weight of the letters.

In the case of large letters or numbers, like those made with wood slats, it may be necessary to rout keyhole in the back of the backing board, as the double-sided foam tape may not be strong enough to support the weight.