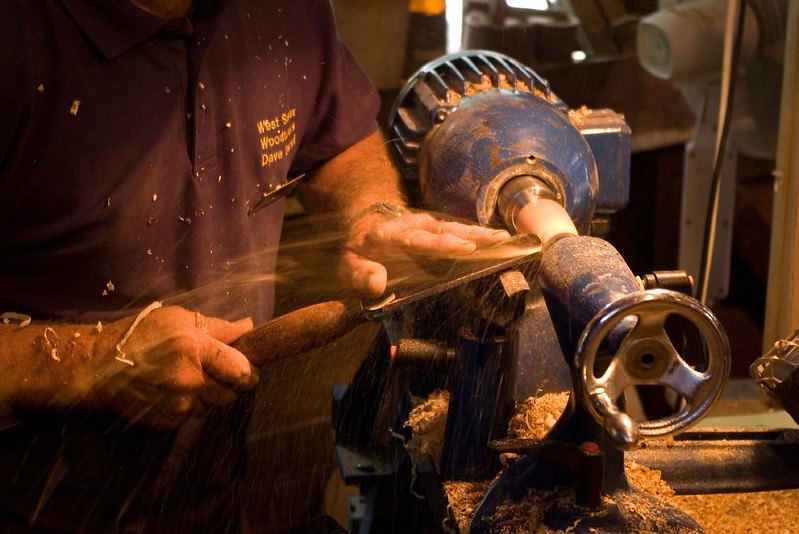 Amongst the lesser known specialty power tools one might find in a woodworking shop is the lathe. By and large, most of us woodworkers don’t have one. That’s because the lathe is a specialty tool, with certain specific machining operations that it’s designed to do. If we don’t do those operations, then we have little use for a lathe.

But a lathe is a fascinating tool, able to do operations that no other tool can. While it might be possible to produce similar parts without a lathe, it’s not possible to produce parts that look just like those produced by the lathe by any other technique. If we want those parts, we either need to have a lathe or we need to buy those parts from factories which produce them, just for woodworkers.

The parts in question are what are known of as “turned parts.” This refers to the operation of the lathe, which spins or turns a piece of wood quickly, so that the wood can be shaped by a series of cutting tools, basically a variety of different shaped chisels.

There are two basic styles of parts that can be made on the lathe, although an endless list of variations that can be part of the results. One category of turned parts are the turned wood stiles used for banisters and chairs. The other is turned bowls and platters. While the same tools are used to create them, the process is different.

Please note: while I am breaking this down into only two categories, that’s merely talking about the methodology used to create them, not the finished project. For example. a vase and a bowl are shaped the same way on a lathe, even though their use is different.

The working part of the lathe consists of two “centers” in line with each other. Any wood piece being worked on is attached between these two, with the centers holding the piece snugly in place. The workpiece is then rotated around the axis created by the two centers, allowing various cutting operations to be committed on them. This produces a part which is symmetrical around the axis of rotation.

The two “centers” in the lathe provide the ability to turn the workpiece, with one of them being belt-driven by a motor. The other center is located on what is known as the “tailstock” and may or may not actually be used, depending on the work being performed. In the case of long pieces, the tailstock is always used to hold the part steady; but in the case of shorter pieces, such as bowls, the tailstock is unnecessary.

The workpiece is attached to the driven center (the one powered by the motor), known as the “headstock” securely, usually with wood screws. This ensures that it doesn’t become a ballistic object when rotated. All lathe operations are completed with the workpiece connected to the headstock spindle.

The most common lathe machining operations are removal of wood from the workpiece with a series of chisels. A tool rest is provided, which is movable, while being attached to the lathe bed. The tool rest provides support for the chisels during lathe machine operations, so as to reduce the strain on the operator’s muscles and the tool chatter which would accompany trying to hand-hold the cutting tools.

Once the material is removed, other operations, such as sanding and finishing can be completed on the lathe as well. While it is possible to do both of these off the lathe, sanding especially is much easier to complete on the lathe, allowing the turning of the lathe to provide the power, in such a way as to retain the shape of the workpiece, rather than using a power sander.

If you decide you want a lathe, there are a few important specifications you need to take into account. These few specifications define the capacity of any particular lathe. As the lathe itself is a fairly simple tool, you can use the specifications for making your buying decisions.

Of course, any lathe can work on pieces which are shorter than the distance between centers; even down to a few inches. I’ve known woodworkers who have made wood pen bodies on lathes which are designed for turning 48” balusters.

The swing defines the largest diameter workpiece you can put in the lathe. It is determined by the distance between the center and the lathe bed rails. This distance becomes the radius in the circle of the “swing.”

This dimension defines the largest diameter workpiece you can put in the lathe. If you are going to turn a lot of plates or bowls, this specification will be critical to you, as it will determine the largest size piece you can do on that lathe.

Generally speaking, the larger the motor, the better. This isn’t just true for lathes; but for all power tools. In the case of a woodworking lathe, the motor size will affect how much material you can take off on a single pass. A larger motor allows you to take more material off, while a small motor will mean that you have to take more time doing your projects, as you’ll have to make shallower cuts to avoid slowing down the motor.

All lathes have some sort of speed control, usually a belt with stepped pulleys. Some get a bit more sophisticated than that, with either electronic controls or a tapered pulley, which allows for constantly variable speeds.

When talking about speed, we customarily think in terms of the revolutions the part makes per minute (FPM). But that’s not what’s really important. What is important is the distance traveled across the cutting tool per minute, as measured in feet (FPM). Materials and cutting tools are matched for a specific FPM range.

It’s rather obvious that the higher the RPM, the higher the FPM as well. But a lot of people forget that the larger the diameter of the part being worked increases the FPM as well. So, a larger diameter object, like a bowl, will need a lower RPM to give the same FMP as what you would have with a baluster. The harder the wood being cut, the lower the FMP you should have.

In addition to these basic specifications, you want to pay attention to the overall construction of the lathe. These tools actually are put under a large amount of stress when you are turning a piece of wood. A poorly designed or weak lathe will flex under that stress, something you just can’t have. More than anything, you can tell how sturdy the lathe is by looking at the bed or rails. If they don’t look massive and sturdy, you will probably have a problem with your lathe.

For a lathe to work properly, everything must be immovable, except the rotating piece of wood. So, regardless of how the rest of the lathe looks, don’t buy it unless the lathe is solid. That way, you can be sure that it won’t flex under the stress of turning the workpiece.