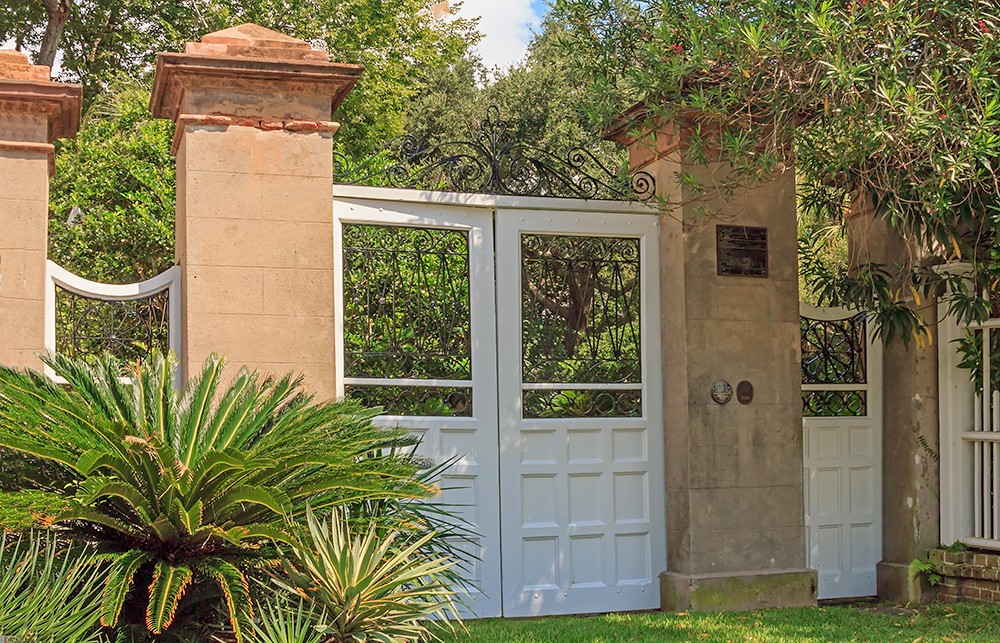 When it comes to fences and gates, we have two basic options open to us; wood and metal. Oh, there’s vinyl as well, but that’s actually just a replacement for wood; one that really isn’t any cheaper and doesn’t last longer either. With metal, we’re either talking about wrought iron, which is really welded steel tube and chain link, which isn’t all that attractive, but is the Lowest cost option available.

Metal fences and gates last considerably longer than wood as well. Most wood fences today use pressure-treated fence posts, so we’ll use that as our basis. Pressure-treated fence posts will last five to ten years, if buried directly into the ground. The same can be said for the fences attached to them. However, if those same fence posts are anchored with gravel or concrete, we can expect to get 30 years of life out of them. That might sound good, until we compare it to a wrought-iron fence, where we can still find examples in use, which date all the way back to the late 1800s. Properly maintained and painted periodically, wrought iron far outlasts any wood fence.

There’s another way that wrought iron outlasts wood; and that’s one that specifically applies to gates. Anyone who has built wood gates knows the problem with trying to keep them from sagging over time, especially in the case of a wide gate. This sagging comes from the combination of weather and the weight of the gate itself pulling against the fasteners. As time goes on, it is actually possible to see the gate go out of square, so that the latch side of the gate is lower than the hinge side, dragging on the ground.

This problem is largely due to the methods and materials we use to make wood gates. Were we to make the gates using mortise and tenon joints for the framework, it would probably go a long way towards reducing that sag. But even then, the mortise and tenon would be in softwoods, which aren’t as dense and don’t resist the ravages of time as well. So there’s still a chance the gate would eventually sag.

Metal gates are totally different, in that the gate is welded together, making it into one solid piece of metal. There really is no place for the gate to start coming apart or for the pieces to start shifting in relation to each other, unless the gate rusts to the point where the pieces of metal fall apart or separate from each other. Were that to happen, it probably wouldn’t be at the welds, but beside them, as the weld is often stronger than the metal tubing. As long as the gate was properly made and is painted when needed, the chances of that happening are virtually nil.

There are two things that keep people from using metal gates, over wood gates; cost and their inability to do the work themselves. Most woodworkers aren’t welders and so don’t have welding equipment. And buying metal gates is expensive. Besides, metal gates don’t provide the privacy that wood ones do.

I’ve already mentioned that when we refer to iron gates, we’re usually referring to wrought iron, which is actually steel. But is any iron actually used in the construction of these gates? That depends on the design. While the bars for the gate are almost always square or rectangular steel tubing and any scrollwork made by the welding shop is likely to be steel strap, that doesn’t preclude actual iron being used in making the gate, specifically cast iron.

Many decorative components of wrought iron gates are actually cast iron. The spiked finals we find commonly used on the top of wrought iron fences are actually cast iron. There are also a wide range of stock decorative parts, including scrollwork, floral pieces and panels which can be bought and incorporated into the gate’s design. Building a gate where these decorative pieces are included over the wood panel makes for a very attractive combination.

Wrought iron has largely been replaced by steel in many if not most industrial applications. Steel is generally stronger than iron, although the two are essentially the same metal. But the process of turning iron to steel adds carbon, resulting in an alloy that is considerably stronger. Today, there are many different types of steel alloys, each developed to provide a specific set of characteristics.

But cast iron is more malleable than all of them, as well as less costly to produce. Being malleable, it is also fatigue resistant, able to be bent and straightened considerably, many times over, without breaking. Iron is easier to work, as well as being inexpensive, making it the ideal choice for decorative metalwork. It is easier to work with and can be welded to the steel framework of the gate. Basically cast iron is used for design, while steel is used for strength.

Wrought Iron and Metal Together?

A compromise is to use a wood and metal gate, combining the advantages of both materials. In this combination, the framework of the gate is usually wrought iron, with wood fence pickets attached to that framework, providing privacy. The combination of the two provides for the strength of a metal gate, along with the privacy that wood gates provide, making for a very attractive gate.

One way of making such a gate is to start out with a steel gate frame kit. These are readily available through lumberyards and home improvement centers. The frame hit provides the basic structure for the gate, allowing a gate to be made which looks much like any other wood gate from the outside, but has the benefit of a metal frame on the inside.

Taking a step up from there, one can easily get a welding shop to make a custom gate frame of literally any style. The advantage of this is the appearance, as the welding shop will gladly design and construct a gate in which the wrought iron is not only providing a hidden frame, but is a part of the decorative appeal of the gate as well. Rather than having the frame hidden, it will be visible and will be used with wrought iron fence posts, set into concrete. Scrollwork, for which wrought iron gates are famous, can be integrated into the design of the gate, either overlapping the wood panels or at the top.

As an alternative for attaching the wood to the metal gate frame, holes can be drilled through the frame and the wood, allowing carriage bolts to be inserted through both. With the heads of the carriage bolts on the outside, painted to match the metal framework, it will provide a medieval style appearance.

Maintaining an Iron and Wood Gate

The only drawback to using a combination of wrought iron and steel in making a gate is the maintenance of the gate. The wood and steel in that gate will be finished with different materials and will require separate refinishing. Many people attempt to do this with the gate fully assembled, but it is actually better to do so by first disassembling the gate, taking off the wood and then refinishing the two materials separately.

The obvious problem with refinishing both materials with the gate still assembled is that the gate finish for the wood will get on the steel and the finish for the steel will get on the wood. Getting the oil or oil-based stain from the wood onto the metal framework of the gate really isn’t much of an issue, as the pint used for the metal will probably be oil-based anyway. But when the paint for the metal gets onto the wood, it is stuck there and can’t be easily removed.

But there’s a bigger issue in keeping the gate assembled. That is that maintaining the gate in this manner means that the area between the two materials, where they come into contact with each other, will not be attended to. That may be acceptable once or twice, but eventually the paint on that side of the metal will deteriorate and water will become trapped there by the wood. This will lead to rusting and eventual deterioration of the gate.