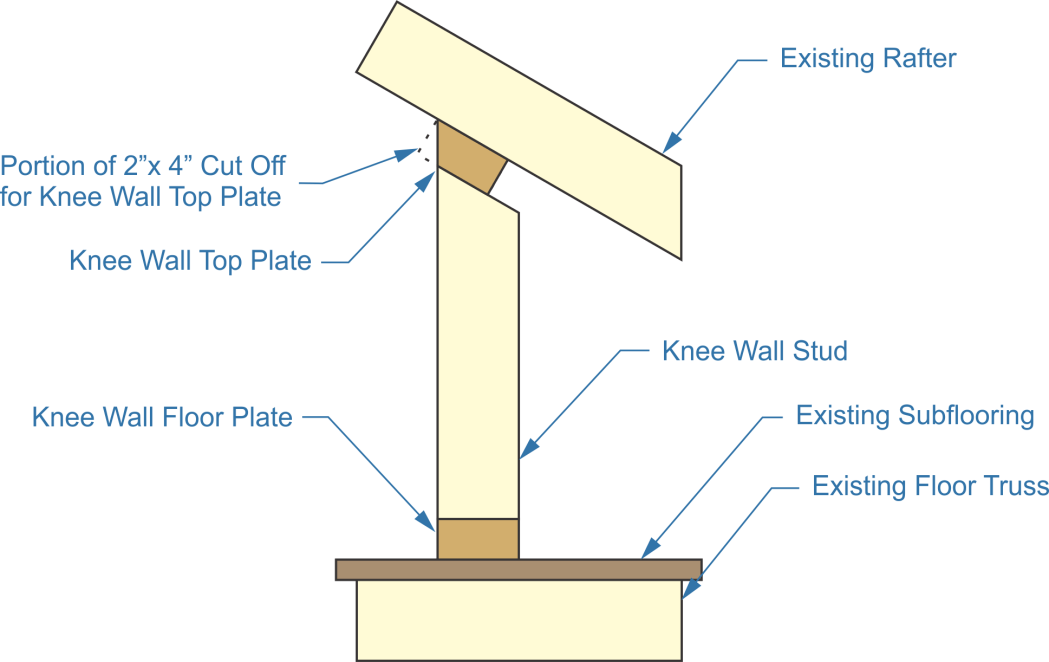 Pretty much all homes come with an attic. The real question is whether or not that attic is usable space or not. Homes today are made mostly with trusses, as that’s a more cost-effective way of providing the roof with the support it needs. Trusses also allow for large open spaces in the rooms below, as the truss can be designed in such a way that it doesn’t need any supporting walls, other than the home’s perimeter wall.

But those trusses make it hard to use the attic for much more, as their webbing gets in the way of building a room in the attic or even using it for storage space. That’s not to say it’s impossible to use at all, as many people have successfully converted a truss attic to storage.

On the other hand, turning a truss attic into another living space is nearly impossible, without remaking the trusses into rafters. Structurally, that can be problematic for a number of reasons, most especially because the truss members that would have to form the rafter and the ceiling joist for the floor below usually aren’t made of material with a large enough cross-section to support the weight. Attempting to shortcut the building code and use that material anyway will result in roofs and ceilings that sag.

Older homes don’t typically have this problem, as they are built with rafters, rather than trusses. This leaves a lot of open space, which can be readily converted to living space or storage. It takes a fair amount of work to make that conversion, adding flooring, knee walls, partitions, a staircase and possibly even a bathroom; but it can really be worth it, increasing the value of the home.

One of the first steps in that process is to install knee walls to hide the eaves of the home. Since the ceiling (roof) of the attic is sloping, the entire area can’t be used as living space. Building code requires that there be at least half the floor space having a ceiling height of 7 feet or more, it just doesn’t make sense to try and finish the area out all the way to the eaves. Better to block off some of the area with knee walls and have more usable space. If desired, the area blocked off can be used for storage.

While some people use the terms “pony wall” and “cripple wall” interchangeably with “knew wall,” there are actually differences. A pony wall is a short wall, much like a knee wall, but it doesn’t extend all the way to the roof or ceiling, whereas a knee wall does. Cripple walls are a special kind of short wall, built on top of an exterior foundation to support a house and create a crawl space.

Before building the new knee walls to make the attic living space, it may be necessary to remove existing knee walls. It’s not uncommon for people to start out finish an attic, but never finish the project. If that’s the case, it might be advisable to remove knee walls that are not installed correctly.

The number one way that knee walls are installed incorrectly is to build them without a floor to top plate. People do this, not understanding the purpose of those plates. They incorrectly think that all they need to do is scab 2”x 4” from the ceiling joists to the rafters and cover them with sheetrock to make a wall. But without the floor and top plates, there’s nothing to attach the drywall to at the top and bottom of the wall. That leaves the wall susceptible to cracking at the joints.

Some Design Considerations to Consider

While knee walls are necessary in the construction of an attic living space, the space behind that wall doesn’t have to go to waste. Even though it can’t be used as living space, it is still valuable for storage. All that’s needed is access through the knee wall into that space in the eaves.

Considering that the studs for the wall will probably be 16” apart, it’s easy to add in doors between any two pairs of studs, creating a cabinet. This should be done every 4 to 5 studs apart for long walls, with the end ones being about two studs away from the end of the room. Any further than that and it becomes difficult to gain access to the things stored farther from the doors.

The doors themselves can be made of plywood or ordered from any company that makes cabinet walls. Finish out the door opening with 1”x 4’s, over the sheetrock, with either more 1”x 4”s or casing on the drywall face to frame the opening. It’s also a good idea to make a “plug” out of several layers of rigid foam insulation, to be placed in the opening before the door is closed. Otherwise, that doorway becomes a place for heat to escape in the wintertime and heat to get into the attic room in the summer.

Knee walls can be built literally any height, but are normally somewhere between 36 to 42 inches. This provides enough height to make the space against the wall usable for furniture and placement of other items, even if it is not high enough to stand there.

While knee walls aren’t normally considered to be structural, adding them to an older home’s attic can help provide some support to the rafters, helping to keep them from sagging. However, if the knee wall is going to be used for that purpose, it is important to ensure that there is adequate support for the knee wall itself. The weight of the roof, especially with a snow load, can push down on the knee wall, transferring that weight to the ceiling of the room below and causing that ceiling to sag.

The knee wall can be built in place, but that requires toe nailing the studs, which is considerably harder, unless one has a pneumatic framing nailer to use. Without that, it is best to do what most carpenters do for any wall, building it flat on the floor, and then tipping it up into place.

It’s easier for the overall work of finish out the attic if the plans are laid out on the floor, using a tape measure, pencil and chalk line. Seeing it laid out can often reveal potential problems that weren’t obvious when the plans were being made. The layout also makes it easier to set the walls in place, when the time comes.

Before building anything, it’s best to cut a template board. This will provide an accurate measurement of the angle of the roof pitch, allowing the studs and top plate to be cut so that they will fit properly together. To make this template board, start out with a section of 2”x 4” which is just a couple of inches longer than the desired wall height. Set it in place, with one end on the floor at the line where the knee wall is going to be located and allow the top end to sit alongside one of the rafters. Plumb the 2”x 4” and then mark the edge of the rafter on the side of the board, double checking to ensure that the board is plump at least twice.

For an older home, it’s a good idea to take that template board and plumb it up next to several other rafter along that same wall, with the base of the template at the marked line for that wall. Rafters can sag over time and it is important to know if there is any sag in the roof, before building the wall. If there is a sag, then it’s a good idea to measure how much of a sag at each rafter, noting them down for the necessary adjustment to the cut lengths of each stud.

To finish up the pattern board, lay a framing square or a scrap block of 2”x 4” up against the line scribed on the board and make another line to indicate the thickness of the top plate. Do the same at the bottom end of the template. Then cut the template at both of these two new lines, creating a board that is the exact length of the studs being used to build the knee wall.

When building a knee wall in any attic, it’s a good idea to match the studs in the knee wall up with the existing rafter. That will make it easier when hanging and finish sheetrock. However, older homes may not have their rafters every 16” on center, so be sure to measure the rafters in the attic.

Cut the studs to length, based upon the template. If the roof is sagging and different length studs will be needed, cut them individually to length, marking them to identify what order they are installed. Then use the template to set up either a circular saw or a table saw to rip the top plate. It needs the same angle cut on it, so that when the wall is built, the edge of the top plate will line up with the studs, providing a flat surface for the sheetrock to mount to, as shown in the diagram below.

Assemble the wall on the floor and nail together, just as would be done with any other wall. Note in the diagram above, that the top plate does not go the full depth of the studs, once it has been cut off at an angle. This is typical, so don’t be concerned about it. Even so, two nails should be used for joining the top plate to the studs.

With the wall’s framing built, it needs only to be tilted up and set in place. Nail it to the floor joists and to the rafters, which will be serving as the ceiling joists. I’d recommend nailing the floor plate first, then the top plate. Be sure to nail through the existing subfloor and into the joists below, not just into the flooring. Since the studs are aligned with the rafters, it will probably be necessary to toe nail them in place. With the floor plate nailed in place first, toe nailing the top plate will be easy, as it will be possible to go through the cut face of the 2”x 4”, and the hammer blows will not push the wall out of place.

Finishing Out the Knee Wall

With the knee walls installed and any other framing needed completed, the next step is to install any wiring needed for electrical outlets. According to the US National Electrical Code, electrical outlets must be installed every six feet in living areas of the home. They should be 18” off the floor. Mount electrical boxes to the studs at this time and run the wire in-between them, trailing off to where it will connect to the rest of the home’s wiring.

All walls in the attic, as well as the rafter, will need to be insulated, as they typically aren’t. Normally only the floor of the attic is insulated, helping to keep heat in the living area. Since this is a new living area, it needs to be insulated as well. Fiberglass batts, rigid foam panels or spray-in foam can be used.

Install drywall on the interior side of the roof and walls, starting at the highest point of the ceiling and working down from there. By starting from the top, pieces installed lower down can be used to support the edges of the ceiling pieces, helping to keep them in place. Tape, finish, texture and paint the knee walls, along with the rest of the attic room.