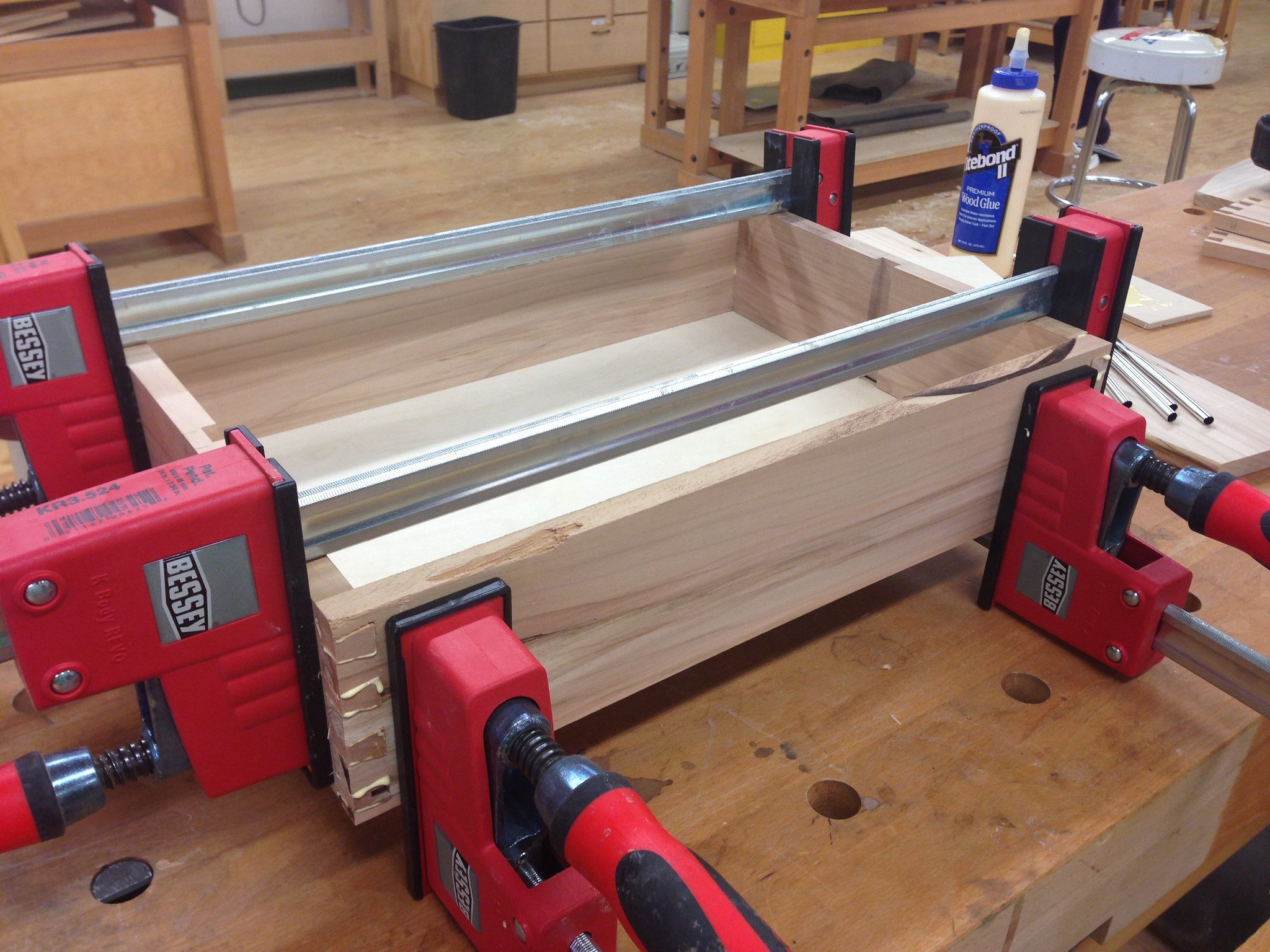 Joinery is one of the most critical parts of woodworking, especially fine woodworking. Often the most important difference between an experienced woodworker and a novice is their joinery. The ability to make tight joints which add to a piece’s beauty, rather than detracting from it, is a skill that takes considerable time to master.

For the true novice, nails and screw are the joinery of choice. However, as one gains in experience, those nails and screws are largely replaced by glue and then more complex joints that involve the way the wood is cut carrying the weight, while the glue holds the wood together.

So, wood glue is essential to fine woodworking of any sort. While it is possible to make a mortise and tenon joint that holds together without gluing it, it’s not common. That’s normally considered to be another whole level of woodworking, something best left to the true masters, those who are trying to recreate period pieces and the Japanese who specialize in learning the complex joinery required for restoring old temples. For the rest of us, there’s wood glue.

Joinery with wood glue is popular for a number of reasons, chief amongst which is that glued joints don’t leave us with the problem of hiding nail holes and screw heads. About the only thing that might need to be hidden is any glue that squeezes out and with proper care and experience, that can pretty much be eliminated.

But the real question people ask about wood glue is whether it is strong. Surprising those people, wood glue is actually stronger than either screw or nails. That’s mostly because the wood glue attaches the pieces all across the joint, whereas fasteners only attach it at the points where the fasteners are inserted and a very small area around that. Fasteners can even pull out, especially as they age, which wood glue can’t do.

Wood glue ranges from 3,600 to 4,000 PSI of tensile strength. That’s stronger than the wood that it is attaching together. That’s why properly glued joints won’t break loose, once the glue has fully cured. In fact, were one to try and break such a joint apart, what they would find is the wood breaking, rather than the glue joint, even if the wood breaks close to the glue.

But to get that strength, the glue has to be fully cured, not just dried. What’s the difference? Drying is the first stage of the process, where the majority of the moist comes out of the glue. It takes somewhere between 30 minutes and an hour to occur. At this point, unstressed joints can be unclamped and the joint will not come apart, as long as no stress is put on the joint. But for stressed joints, those which are carrying a load of some sort, it takes at least 24 hours for the joint to reach the point where it is safe to unclamp. In cold or humid weather, that time can extend to as much as 72 hours.

For wood glue, drying is the part of the process where most of the moist comes out of the glue and the polymers of the plastics in the glue come together. But those polymers have not gained their maximum strength, because there is still some moisture in the glue. But at that point, the drying process slows considerably, as it is harder for the moisture to come out of the glue. Until that happens, the glue isn’t fully cured and hasn’t reached its full strength.

For some other sorts of adhesives, like epoxy and Gorilla Glue, the curing process is even more of a chemical reaction than it is for wood glue. In the case of epoxy, there really isn’t a “drying” stage to the process, as the glue doesn’t really dry. Rather, it cures through a chemical reaction. Nevertheless, we can see the same two-step process in the curing, where the adhesive sets and the joint can’t be moved in a short amount of time, making it safe to handle, but doesn’t fully cure and gain its full strength for 24 hours. Even five minute epoxy should be given 24 hours to cure fully.

While 24 hours is the standard for drying wood glue, there are things that can be done to reduce that time somewhat. There isn’t an exact science to it, where we can say doing such-and-such a thing will reduce the dry time by 25%, so some experimentation will be required. All the same, keep in mind that the joint will continue to gain strength as it cures fully. So take some care in handling. But if it is necessary to remove the clamp and get on to the next stage of construction, these steps can be applied.

Age actually affects the performance of wood glue. As it sits around, the glue tends to do a couple of things, including separating. A new bottle of glue will dry faster than one which has been sitting around the garage for a couple of years.

Since the idea is for the water in the glue to evaporate out of the glue, increased air flow helps, just as it helps the perspiration on one’s skin to evaporate, cooling them. Working in a well-ventilated work area or even pointing a fan at the workpiece while it is drying, will speed up the drying time.

Heat also speeds up the drying time. A warm workshop or a hot day can aid in reducing the drying time. Additional heat can be used as well, with care. Pointing a hair dryer at the wood joint will heat it and help the moist to evaporate out of the glue. On the other hand, too much heat can discolor the wood and can actually soften the glue as it hardens.  Don’t use a heat gun, instead of a hair dryer, as that’s too much heat.

If there’s a lot of humidity in the workshop, that will slow down the drying process. If drying time is a problem, it might be necessary to install a dehumidifier in the workshop. An air conditioner will do this as well, but will also cool the room at the same time; so depending on how humid the area is, an air conditioner cooling the room while drying it might end up with a neutral result.

Use a Thin Coating of Glue

One of the things that can slow glue drying times the most is the application of too much glue. The more glue there is in a joint, the more moist has to come out. Worse, if there is a lot of squeeze out, the glue that has squeezed out has to dry, before the glue in the joint can. Wiping off the squeeze out can help, but that must be done with care, as wiping the glue off can cause the glue to be wiped into the wood’s grain, affecting the finishing of that wood.

Speaking of finish, unfinished pieces will dry faster than finished ones. The moist in glue that is applied to unfinished pieces has two ways to escape; through the edge of the glue joint and by soaking into the wood and then evaporating. But any finish on the wood will prevent the moisture that soaks into it from evaporating, trapping it there with the glue.

Adding water to the glue doesn’t help it to dry faster, as some people think it will. While this will thin the glue down, allowing for a thinner layer of glue to be applied, there will be more water in the glue.

Clamp the project can actually help with the dry time, as the clamping pressure spreads the glue out, including pushing excess glue out of the joint. It also ensures that the joint does not move during the drying process. If the joint moves, while the glue is drying, it breaks up polymer strands, which then need to reform.

Use a Different Glue

If faster drying time is needed, then it might be worthwhile considering other adhesives than traditional PVA wood glue. There are a number of different adhesives which are used with wood that cure, rather than drying. In other words, the process is a chemical reaction. This can be especially helpful when working in a humid environment, where the humidity is slowing down the dry time for the glue.

Polyurethane glues, like gorilla glue, cure through moist. This is why the directions for Gorilla Glue say to wet one surface before putting the joint together. But not all polyurethane glues call for wetting a surface, as they depend on the moisture in the wood. When working with those glues, spraying a light mist of water onto one surface will speed up the cure time.

Cyanoacrylate glues, commonly referred to by the trade name “Super Glue” also cure with moist. But in this case, it’s the moisture in the air that acts as the catalyst for curing. However, if the glue is not curing properly, a very light misting of water on one surface, followed by wiping most of it off can help it cure.

Epoxies can be purchased with a variety of dry times, ranging up into hours. Fast-dry epoxy typically comes with a 5 minute working time and a 1 hour handling time. However, adding additional hardener will lower these times. It is also helpful to warm the resin part (not the hardener) before mixing or warm both with either a heat gun or a heat lamp after applying and joining the pieces together.