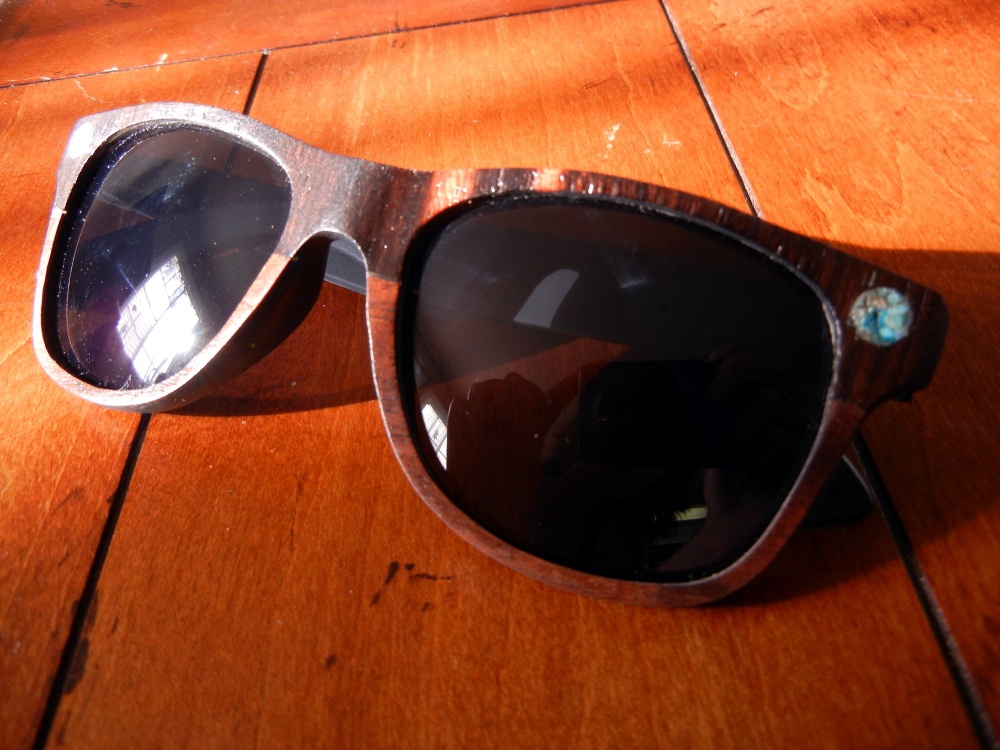 Sunglasses have become a fashion statement. What was once merely a convenience, purchased for their ability to protect our eyes from excessive sunlight, has become a fashion accessory which can command big bucks. The big brand names can charge over $100 for a pair of sunglasses, partially because of their name and partially because of their style.

Some manufacturers have gone to making wood sunglasses, more as a social comment than anything else. Plastics, the material of choice for most sunglasses, have gone out of favor and people are switching from plastic bags back to paper bags, using bamboo disposable utensils for parties and picnics and wearing wood sunglasses as well. If nothing else, making a pair of wooden sunglasses can be an interesting project, allowing us to utilize our skills in a different and rather unique way.

Even so, we’re going to need to buy some sunglasses that we can cannibalize to get the lenses. I’d recommend buying some at the local dollar store, assuming they can be found there. We’re also going to need some glasses to use as a pattern, since none of us are fashion designers. These need to be plastic frames, as wire frames will not give us a wide enough profile for wooden framed sunglasses.

There are several ways I’ve seen of going about this project. I’m purposely not opting for one of the easiest ones. The big problem I see with the easy ones is that they won’t end up being strong enough to use and are likely to break. To overcome that risk, I have chosen to make a laminated wood frame.

The laminated wood frame not only allows us to create glasses frames that are stronger, but also to make them thinner and to curve them. If we look at any other glasses frames, we’ll see that the front and earpieces are all curved, so that they fit our face better. We’re going to reproduce that curvature in the wooden sunglass frames.

To start with, we need to make the laminates for the front and earpieces of the glasses. These will be made to reproduce the same curvature that exists in the glasses we’re going to use as a pattern. To do this, we’re going to work with wood veneer and utilize standard wood bending techniques. A minimum of three layers of wood veneer should be used, although up to five can be. Buy the thickest veneer you can find for this project.

Using the glasses that are going to be the pattern, trace the curvature of the front and earpieces onto solid blocks of scrap wood, thick enough to make the various pieces for the glasses. These will be the molds for the laminating process, so it is important that they cover the full size of the laminate being made. That probably means that a 2”x 4” isn’t wide enough in its 2” dimension, but will be in its 4” dimension. Separate molds will be needed for the front and earpieces.

Cut the curve on a band saw, carefully following the line and preserving both pieces. if necessary, smooth out the surface, while maintaining good contact between the two pieces.

We’re going to want to laminate the various layers of veneer at a 90 degree angle to each other, just like plywood. This will give the glasses much more strength than if we used a solid piece of hardwood. So, cut all the veneer blanks all the same size, matching the size of the molds and making the grain go perpendicular on every other one. Stack the blanks together and make alignment marks on the sides, as well as marking them for which side goes up and what order they go in.

Take the top veneer and trace the outline of the glasses that are being used as a pattern onto it. Then cut out the lens openings on a scroll saw. It would probably be best to cut them a little off the line and then sand them up to the line for accuracy. If an oscillating spindle sander is not available, then a drum sander in a drill press, Dremel tool or drill will work.

With that layer cut out, use it as a pattern to transfer the eye hole onto the other layers and cut them out, using the alignment marks on the edges to ensure that the eye holes are properly located on all the layers. In the case of the middle layer, the one that will create the groove to hold the lenses in place, use the lenses themselves to outline the cutout, spacing it evenly over the tracing from the front layer, so that the groove will be of an even depth all around. To assist in aligning the lenses, I’d suggest making marks 1/16” and 1/8” around the traced outline.

With all the lens hole cut out, stack the layers of laminate in order and glue them together with wood glue, making sure to cover the entire surface of each layer of veneer. Then clamp them to the mold, with as many clamps as can be fit. Allow at least 24 hours for the glue to dry fully.

The veneer for the earpieces needs to be laminated in the same way; with the exception that there is no need to cut out the lens hole before laminating the layers of veneer together. Keep in mind that two pieces will be needed and they will need to have opposite curvature. One way to accomplish that simply is to make one laminated piece which is big enough for both of them to be cut out of.

Once the glue is dry, the laminate can be unclamped and the outline of the parts cut out on the scroll saw, as well as cutting out the ear pieces. Sand the faces and all edges of all the parts smooth, including the inside of the lens openings.

The difficult part of this project is assembling the glasses. There is no place where we can just order glasses hinges to use for this, so we either need to scavenge hinges or make our own.

The easier option is to scavenge the hinges from the same glasses that the lenses came out of. Those are probably wire frames, which can be cut with a pair of diagonal cutters. Once cut, holes can be drilled into the back side of the front part of the frames, and the end of the earpieces for the cut off wire frames to be glued into with epoxy. Epoxy will make a strong bond that is not easily broken.

To make hinges for the glasses will be considerably more difficult and the resulting hinges will probably be more fragile. Nevertheless, doing so will keep with the idea of wood sunglass frames, making them more unique. Essentially the hinge is a finger joint, with one finger sticking out from the back side of the front piece and two fingers to bracket it cut out from the ends of the earpieces.

To do this, first drill ¼” hole in the back side of the front piece, near the ends. glue ¼” hardwood dowels into these holes and allow the glue to dry. Once dried, the single finger can be shaped from this dowel, sticking out no more than about ¼”.

Transfer the actual dimensions of the fingers on the back of the glasses fronts to the ends of the earpieces and use that as a guide to cut two fingers in the ends, by cutting out the middle part where the single finger on the glasses face will go. Make sure there is a snug fit, but not so snug that the glasses won’t bend at the joint. Sand the corner of all the fingers on what will be the inside of the corner, rounding them so that they do not prevent the glasses from folding. Then assemble the glasses, drilling a small hole through all three fingers, so that a hinge pin can be inserted in them. A cut off brad can be used as a pin.

I would recommend varnishing the glasses before inserting the lenses, as it would be difficult to remove the varnish from the lenses. For simplicity, a spray varnish would probably be best, sanding lightly between coats.

With the frames finished, push the lenses into their openings from the back, taking extreme care not to break them.