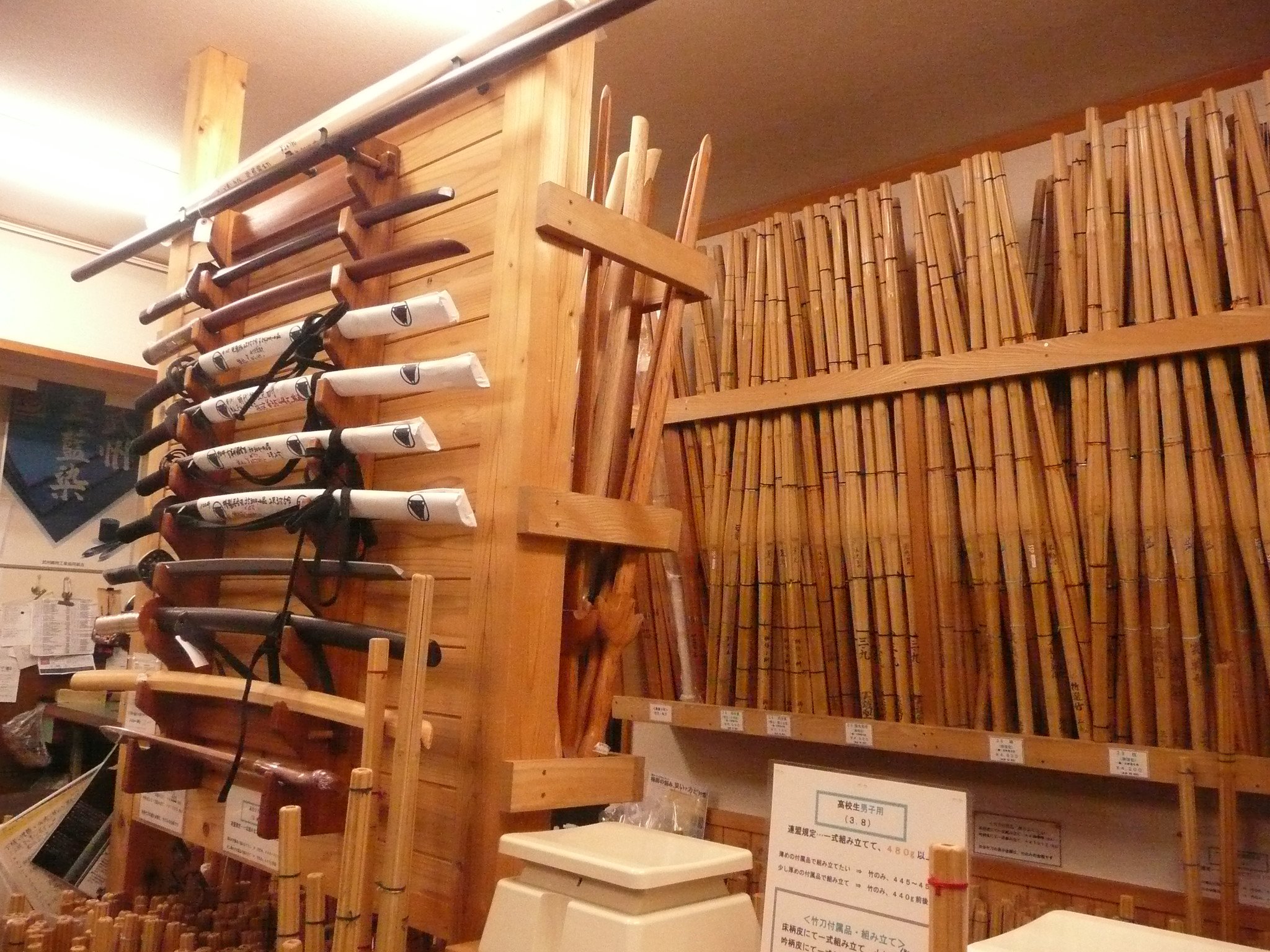 Making a wooden sword is a satisfying and fun project, leaving the building with a great conversation piece or decoration for your office or den. Throughout history, wooden swords have been used for training and practice, as well as symbolic purposes. In the movie Gladiator, Proximo talked to Maximus about a ceremonial rudis that he had, which had been presented to him by the emperor.

While swords are no longer used as serious weapons, they still retain a ceremonial place in many cultures, especially in the military. Our fascination with these ancient weapons is made obvious by the number of people who buy reproductions, whether usable or merely cosmetic ones.

In this article, I’ll be discussing making a realistic looking sword, not a child’s play sword. While the same techniques might be used, most children’s swords are much simpler. In this project, the idea is to make something that will impress friends and co-workers.

There have been countless styles of swords made throughout history. Yet they all share certain things in common. Therefore, wood swords are all made basically the same, whether we’re talking about an English Longsword, a Japanese Katana or a Roman Gladius. All of them consist of four basic parts:

Together, the guard, handle and pommel of a sword are referred to as the “hilt.”

Making the various parts of a sword out of different types of hardwood can be very attractive, helping to set them apart from each other. Even with metal swords, the hilt is usually made of a different material than the blade, often colored quite differently and the handle is made of a third material, often leather for a better grip.

Before doing anything, a good design is needed. Take some time to research historic or even fantasy sword designs, in order to find something good to use. Dimensions are variable, so don’t expect to find a diagram of the exact dimensions used for making ancient swords, although there are websites which have some basic dimensional information. Other than that, a good hand with a pencil and sketchpad will be necessary.

One important thing to keep in mind in the design of the sword is how the parts will connect together. Basically, the blade will need a tang at the hilt end, although it will not be a full hilt. This hilt will go through the guard and into the handle. While it is possible to have it go all the way through to the pommel, it is actually easier to let the pommel have its own protrusion, much like a tang, to go into the handle from the other end. This won’t result in a sword that is as strong as the original, but it’s made of wood, not metal.

The handle can be either made in one piece or two, depending on the sword design. Many European sword designs had a round handle and pommel. In that case, it makes sense to make the handle one piece, as it can be turned on a lathe. But other swords, like the Katana, use a handle with an oval cross-section. In such a case, it would make more sense to make the handle in two pieces and then glue them onto the tang.

The blade of the sword needs to be made from one solid piece of hardwood. A finely grained wood is the best for this, but any fairly dense hardwood will work. Since the wood typically comes sanded to ¾” thick, it will need to be resawn to a thickness of 3/8” to ½” thick before being cut and shaped. If a band saw is available, that’s the best way to resaw lumber, although it can be done on a table saw as well.

The next step is to cut out the profile of the blade. This includes cutting the tang as well, which will need to be set in from the edge of the blade slightly, in order to leave room for the handle to go around it. It is a good idea to cut the blade outline slightly outside the line and then sand it on a belt or disk sander to ensure that the profile is exact. At the same time, the profile of the tang needs to be cut and the material should be made slightly thinner, so as to make it easier for installing the blade in the handle.

If a fuller is desired in the blade, this should be cut with a router, before beveling the blade. It can actually be done either before or after cutting out the profile, as the woodworker prefers.

The hardest part of the project is putting the bevel on the blade. With real sword making, this is done first at the blacksmith’s anvil and then by grinding, either with a grinder or belt sander. For a wood sword, there are two ways of cutting the bevel. One is with a panel raising bit in a router table and the other is to cut the angles on a table saw. Either way, some final adjustments will probably need to be made on a belt or disk sander, cleaning up cutting marks and smoothing out the surface.

Before making the handle, the guard should be made. As with swords themselves, there are an endless variety of styles in sword guards. The basic style is nothing more than a crossbar, although some designs have a curved crossbar. As the purpose of the guard is to protect the hand from the enemy’s blade sliding down the user’s blade, a number of different design styles are used, such as the aforementioned curve or putting a wide spot on the ends of the guard to keep the enemy’s blade from sliding off the guard. Katanas actually have a very simple guard, shaped like an oval.

A thin piece of wood is used for a simple guard, such as used on a katana, usually about 1/4” thick. However, most European sword designs will require laminating pieces of wood together to get a block big enough to cut the guard out of, unless some 8/4 lumber is available.

The tang of the blade will need to go through the guard, so a rectangular hole will need to be made in the middle of it. This can be cut through the wood and then the corners squared up with chisels and files, but it’s actually easier to make the guard out of three layers of wood, so that a rectangular hole, just the right size for the tang, can be left in the middle.

Cut the guard’s profile out on a band saw or scroll saw and then finish shaping it with sanders and files, as needed to match the planned design. This part is probably going to take more shaping and carving than any other part of the sword.

There are two basic ways of making a handle, both of which I’ll discuss here.

If the handle is going to have a round profile, then it makes the most sense to turn it on a lathe, perhaps with the pommel glued to it (made of a different type of wood). That will require laminating several pieces of wood together, in order to make a block that’s thick enough to turn. As I just mentioned for the guard, the easiest way to make sure there is a perfect hole for the tang is to leave that as a void when the pieces are glued together.

One great way of doing this is to cut a spacer piece the same size as the tang and wax oil it thoroughly. Then make the laminate, setting that piece in place, as if it were the tang. Once the wood is glued together and clamped, this spacer can be knocked out. The wax will keep the glue from sticking to it.

Turning the handle or the handle and pommel is just like any other spindle turning project, with the exception of its intended use. It is important to keep in mind that the handle has to be comfortable in the hand, so the size must be good for the user’s hand.

When making the handle out of two pieces, start by cutting out two identical blanks from ¾” thick hardwood boards. The first thing that should be done to these is to cut the channel for the sword’s tang. One-half the thickness is taken out of each piece, leaving just enough spare room for gluing.

Set the two blanks on the sword’s tang to verify their fit. Check the edges to ensure that they meet up well and don’t need to be trimmed to match up with each other. Then mark the pieces, so that they will be put together the same way every time.

The outside edges of the handle blanks can be rounded with a roundover bit in a router table. Then finish shaping with a sander. Cutting a piece of scrap, the same dimensions as the tang, and putting it inside the two pieces of the handle, while shaping and sanding them will help keep the pieces aligned, so that they will come out even.

Pommels can be many different shapes, so there is plenty of reason why the pommel for a sword may not be able to be turned on the lathe. In that case, the pommel will probably be cut out of ¾” to 1” thick stock, outlining it on a scroll saw. Then the edges can be profiled on a router table, just like the handle.

In most cases, it’s actually easier to assemble the entire sword at once, rather than just sticking two parts together at a time. The various parts are glued together, using ample glue on all surfaces. Clamping can be problematic, but a single long bar clamp is adequate for clamping everything. Just put a soft pad at both ends to prevent damaging the sword.

Once the glue has had time to dry, the sword will need some final sanding, before finishing it with either varnish or oil. An oil/beeswax mix is nice, as it will have a great luster to it.

As with their metal cousins, wood swords can be decorated in a variety of different ways. It was not uncommon for the hilts of swords used by nobility to be adorned with gems, as well as extensive carving. All of this can be done as well with a wood sword.

Another idea is to use wood inlay for decorative work, especially on the hilt. The diamond pattern particular to katana handles can be done in this way, especially if a laser cutter or CNC cutter is available to cut out the diamonds. A more simple adornment can be done by drilling holes through the handle and guard, once the sword is assembled, and then gluing hardwood dowels in these holes. Once the glue is dry, the dowels can be cut off and the ends sanded smooth with the surface of the wood. square dowels, rather than round ones, make for an interesting design option.

The only decoration normally done on a blade is engraving. This can be done with a laser engraver, if one is available. The same laser engraver might be used on the hilt as well. It all depends on the artistic vision of the craftsman making the sword.