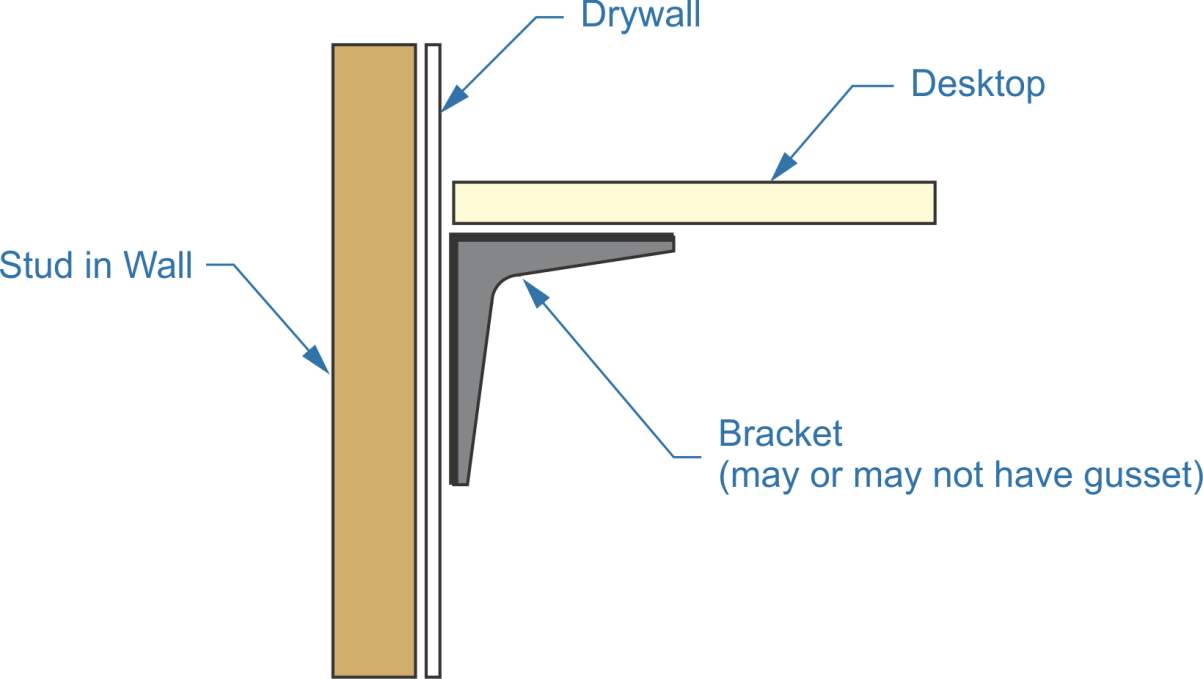 Modern architecture often requires modern furnishings to match. Putting a Queen Anne style table into a modern home looks out of place, just like modern furniture would look out of place in a Victorian style home with gingerbread trim.

Yet building that modern furniture not only requires a different style, it also requires different techniques. You can’t make a “floating” desk or shelf the way that you would any other desk, because the desk doesn’t have legs. Instead, it is attached to the wall in such a way as to make it look like the desk is floating in front of it.

The problem with this is making sure the desk is strong enough, even though it doesn’t have any visible means of support. That requires making good use of materials, as well as solid joinery techniques. There’s no room for slop in a floating desk, as any movement could ultimately lead to the desk falling off the wall, perhaps with disastrous results.

Floating shelves are actually much more common than floating desks, simply because it’s a bit easier to make a floating shelf. shelves are generally less than 12” deep, while a normal desk would be somewhere between 24” and 32” deep. However, for a floating desk, 18” deep is more common, as the greater the cantilever of the desk, the more stress it puts on the mounting, increasing the chances of the desk breaking and falling off the wall, if it is not properly made or if too much weight is put on it.

Even so, a simple floating desk can be counted on to hold somewhere between 30 and 75 pounds. That’s enough for setting a computer on it and using it without problem. If more weight capacity is needed, then consideration for that needs to be made, with additional support for the desk hidden in the desk mount and wall. With the right structure in the wall and solid connection to that structure, a floating desk can hold up to 300 pounds.

There are a number of different brands of floating shelf and desk brackets on the market, made by a variety of different manufacturers. The nice thing about using these is that it makes the job considerably easier, while still giving the do-it-yourselfer the flexibility to vary the design of their desk.

The brackets themselves are quite strong, with many able to hold 90 to 225 pounds. Some can literally hold 1,000 pounds. But these aren’t as invisible, being more like standard shelf brackets, where there is a vertical leg going down the wall. Still, if used properly, the height and depth of the desk will hide the bracket, making it virtually invisible and maintaining the perception of the desk floating.

These brackets must be mounted to studs in the wall, rather than just to the drywall. Drywall doesn’t have any real structural strength, so if any pressure whatsoever is placed on the surface of the desk, there’s a good chance that the mounts will tear right out of the wall. Even using molly bolts or toggle bolts won’t provide the desired strength, as the structural weakness is in the drywall itself, more than the fasteners. Toggle and molly bolts are rated at 30 to 50 pounds.

A true floating desk will hide the brackets totally within the body of the desk. What this means is that if the desk is of slab construction, holes will need to be drilled into the edge of the wood slab to accommodate the fingers of the bracket.

The illustration above shows this sort of bracket, as seen from above. While this sort of bracket does a great job of creating the illusion that the desk is floating, as the bracket is totally hidden by the desktop, drilling the hole into the edge of the desktop can be difficult. They must be absolutely straight into the edge, parallel with each other. If they are not, then the desktop won’t fully slide onto the bracket.

The other style of commercial floating desk bracket is actually considerably stronger and easier to work with, although it is easier to see what’s holding the desk up, especially if someone gets down on the floor to look under the desk. The basic mounting is shown in the diagram below, shown from a side view, with the various parts exploded for clarity.

A rather ingenious variation on this bracket is designed to mount directly to the stud, with the horizontal section going through the drywall. This particular bracket obviously needs to be installed before the drywall is or a section of the drywall will need to be cut out, the brackets installed and the drywall refinished to use it. Still, it provides considerably more strength than a typical L bracket, even though it doesn’t have a gusset. All that is sticking out is a flat piece of ¼” thick flat steel strip, which is hard to see without actually being underneath the desk.

For the do-it-yourselfer, the diagram of the first bracket above provides the basics for making our own brackets out of 2”x 4”s. the desktop itself can then be made hollow, to go over the bracket, hiding it and providing a desktop surface.

The bracket itself consists of a back piece that attaches to the wall, with as many supports extending out perpendicular from it as needed for the width of the desk. It is recommended to have a brace every 16” to provide sufficient support and keep the desktop surface from sagging when pressure is put upon it.

Before building the support bracket, run the 2”x 4”s through the table saw, ripping them to make them 1/16” to 1/8” thinner in the 4” dimension. This small amount of clearance will allow the shelf to slip onto the support bracket, once the bracket is attached to the wall.

The pieces of the support need to be cut absolutely square in both directions. Make a test cut on the saw first, to verify that it is properly aligned. All stationary power tools, especially saws, are designed to be adjustable to make up for tolerances in manufacturing. When the saw arrives, it usually needs to be set up, making these adjustments. If it is not properly adjusted, there is a good chance of gaps in the joints between the back piece of the extensions on the support, weakening it. Tightening whatever fasteners are used to take up those gaps will tend to make the support out of square.

Fasten the pieces of the support bracket together with either screws or nails, along with glue. A minimum of two fasteners should be used for each joint. nails are generally stronger going into end grain than screws are, so that is the preference. Adding glue to the joint won’t make it considerably stronger, but it will help prevent squeaking. Clamping the joints together, before inserting the fasteners will help ensure that the entire assembly is square.

Once the support bracket is built, the desktop itself is built of 1”x 4”s and 1”x 6”s, around the bracket. It’s not clear in the diagram, but the 1”x 6”s used for the top and bottom sides run the full length and depth of the shelf, with the 1”x 4”s that make up the front and side edges fitting between them. This assembly order, coupled with the ripping down of the 2”x 4”s earlier, will make it so that it is possible to hang the bracket on the wall, and then attach the desktop.

A number of different fasteners can be used to assemble the desktop, but I’d recommend using a pneumatic finish nailer and glue. The small hole will be easy to fill and the combination of nails and glue will eliminate any need for clamping, while providing sufficient strength. Take care not to nail through the 1”x 4”s and 1”x 6”s of the desktop and into the bracket.

To hang the desk on the wall, first separate the desktop from the support bracket. Drill and countersink a series of clearance hole into the back stringer of the support bracket, spaced at 16” to line up with the studs in the walls. Then set the bracket against the wall at 29 1/4” above the floor, screw through one of those holes into the stud in the wall. Then use a level to adjust the position of the bracket level, before installing the rest of the screws.

Mounting the DIY Floating Desk without Making Holes in the Wall

People who live in apartments are plagued by the problem of landlords who don’t want them to make hole in the wall. While this is understandable from the landlord’s point of view, it can make things extremely difficult for decorating.

3M has come up with at least a partial solution for this problem, with their Command™ line of adhesive products for hanging things on the wall. While not as strong as screw and nails, they do make it possible to hang pictures, shelves and even floating desks on the wall. The key here is weight capacity, as the strongest of these that I can find is rated at holding 8 pounds. To make up for that, a number of the hangers need to be used.

Using those hangers on the second type of commercial brackets shown above will provide the most strength, as the vertical leg of the bracket provides a considerable amount of leverage.

The other thing that can be done, using the Command™ system, is to build the floating desk in the corner, rather than just protruding out from the wall. Having a corner gives a more linear surface to attach the hangers to and lessens the amount of cantilever, reducing the stress on the fasteners. No matter what, the desk really won’t have a high weight rating, but it will be improved.

While the basic floating desk is nothing more than a desktop, the basic design can be modified considerably to meet your needs and your taste. The easiest possible modification is to make the shelf shallow box, with the front open. This provides a slot below the desktop where papers and office supplies can be stored.

If something more is needed, then the best thing to do is make a wall-mounted hutch, with slots for organizing papers and office supplies. This would be something like a desk riser that is made to provide storage space above a desk for organizing the various things used there. The only real difference is that the desktop and organizer would be built together, making a wall-mounted hutch out of it. Design possibilities for this are endless and depend more on the space available for the office space, than anything else.