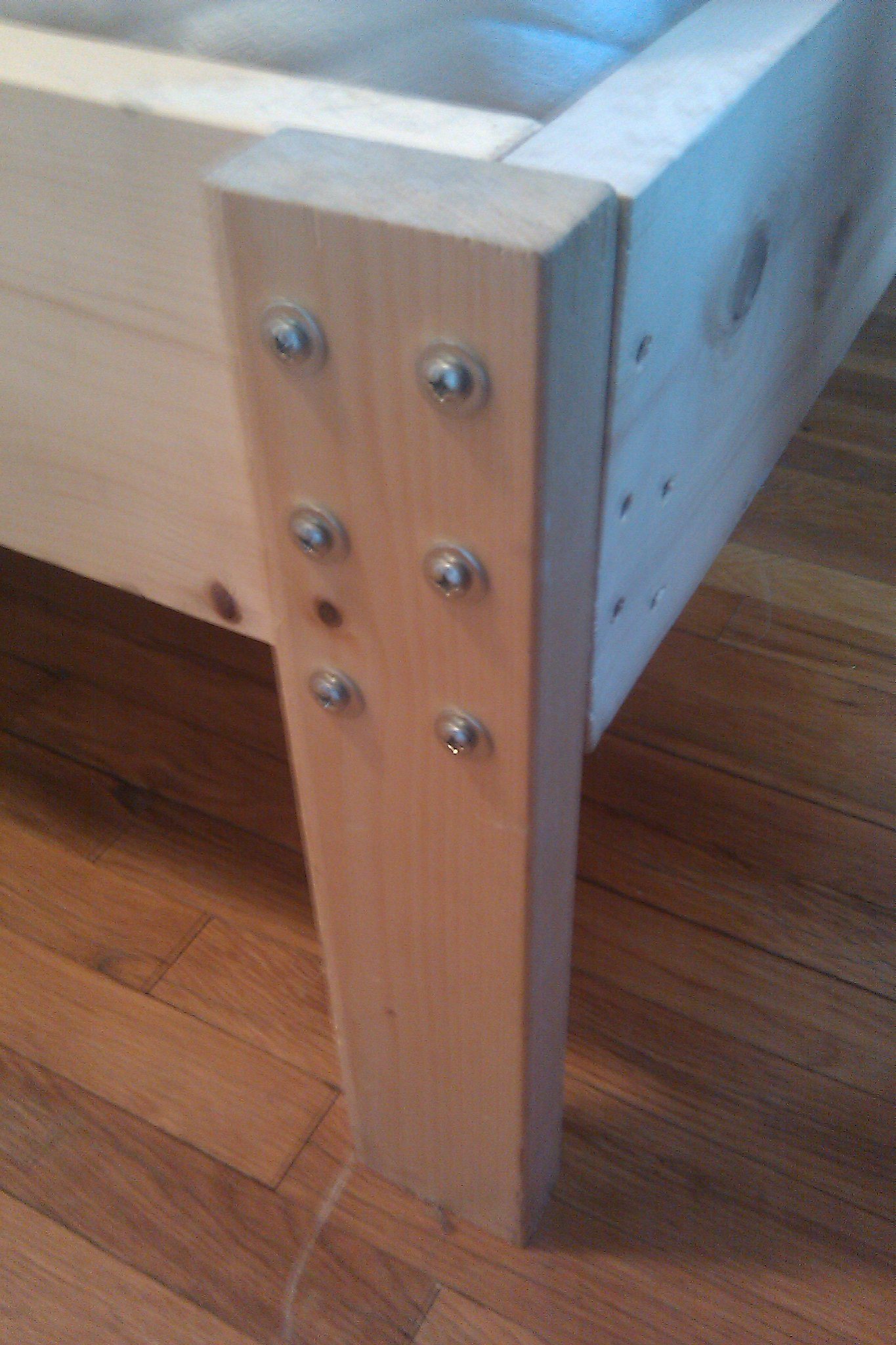 By and large, wood bed frames are more attractive than metal ones. While there are a few styles of metal bed frames which have a headboard and footboard, making them much more attractive, the majority of metal bed frames are merely support for the mattress, without providing any decorative elements. While these can be convenient, if one buys a bedroom set, it will most likely include a wood bed frame, complete with headboard and possibly footboard.

While wood beds are much more attractive than metal ones, they are not without their failings. Metal frames are stronger than wood, so that metal bed frame may fail eventually. This is a real risk with older beds, especially antique ones where horsehide glue was used for assembly, rather than our newer, synthetic adhesives. While excellent for its time, horsehide glue does dry out and become brittle, eventually failing, especially in mortise and tenon joints which are subject to a lot of movement stress.

Few people would want to throw away an antique bed which has been in their family for generations, just because the frame is starting to fail. Unfortunately, many of these people don’t know how to repair the bed properly, so either add metal brackets or run screws through the side of the frame. If either of those are done in a way to keep the repair hidden, it’s not a problem; but that’s rarely the case. All too often, the repair is obvious, destroying the antique charm of the furniture.

But it is possible to repair almost any damage to a wood bed frame, without destroying the look of that piece of furniture. All that’s required is doing the work in such a way as to keep it hidden, by making all the attachments from the inside or the bottom.

This usually requires removing the mattress and box springs, which shouldn’t be a problem anyway, as they would be in the way of pretty much any repair. But it’s important to think of timing, so that glue can fully dry, before the bed is going to be used again. This makes a repair to a bed frame a Saturday morning project, rather than something that can be done in the evening.

Once the mattress and box springs are removed, it’s possible to inspect the frame and determine the extent of the damage. It might help to put some weight on the frame, while inspecting, as that can cause cracks to open up. Try moving the frame as well, as that will show where loose joints are. There are a number of different things that can go wrong, each of which we’ll discuss separately.

Cracks in the Wood

One of the more common forms of damage is to find cracks in the wood, especially the legs, although it might not be an easy failure to find. In order for those cracks to show up, weight may have to be put on the leg, along with a little motion, to make them visible.

Before gluing the cracks, dry clamp the break together, to ensure that the clamping scheme selected will close up the crack. As legs are often curved in one way or another, it can be difficult to find a good way to clamp the crack closed, where enough force can be placed upon it to close it up. wood blocks, between the clamp and the piece being glued might be necessary.

Cracks are fairly easy to repair, requiring nothing more than glue and clamps. Force the crack open and put some glue into it, either using a toothpick or a needle point glue bottle to ensure that the glue actually gets into the crack. Then clamp the crack shut, allowing it sufficient time to dry.

There are several ways of adding additional strength to the cracked piece of wood, if necessary. If the separation of the crack is severe, it can be helpful to run some screw into the piece, working from the inside, so that the screw heads will remain hidden. The same can be done with dowels, drilling holes from the inside and then gluing dowels into them.

In severe cases, it may be necessary to “sister” another piece of wood or metal onto the existing one, again working from the inside. A thick piece is usually not necessary, just something thick enough to hold the screw which will be attaching the sistered piece to the existing part of the frame.

Loose joints are especially common in antique furniture, which was usually made with mortise and tenon joints. The wood often shrinks over time, causing separation. Once that starts, movement of the joint can cause extensive wear on both the mortise and tenon.

There are a number of different ways of repairing a damaged mortise and tenon, depending on how bad the damage is.

If the only problem is that the glue has come loose, then the glue can be cut off the tenon and out of the mortise with a chisel. Then new glue can be applied, putting the joint back together. In the case where the tenon has shrunk to the point where it is loose in the mortise, it helps to put a thin piece of wood into the joint as a shim, making the joint tight once again.

If the mortise and tenon are damaged, it may still be possible to fill the damaged area with a thick piece of wood or with wood matchsticks. Another option is to fill in the damage with an epoxy-based wood putty and then cut it to fit snug, reassembling it with epoxy, rather than wood glue.

Finally, in the more extreme cases, the tenon can be cut off and glued into the mortise. Then both pieces can be drilled and the joint put back together with dowels.

Fixing damaged slats is the easiest repair that can be done to an old bed frame. It’s not uncommon for the ends of the slats to become damaged through use. When this happens, it is easier for them to fall through.

To repair this, remove and throw away the old, damaged slat (or at least relegate it to the scrap bin) and then cut a new slat, using the measurements of a good slat to know how long to make it.

Always check the condition of the rail the slats sit on, when it is necessary to replace a slat. It is possible that the process which damaged the slat, will also have damaged the rail. In that case, the rail will need to be removed from the inside of the bed rails and replaced. This is normally glued and screwed in place, so it will be necessary to break off the rail, clean up the excess glue and then attach the new one.

The side rails of a bed frame rarely become damaged; but it is possible for them to become bent or even broken. If they become bent, the slats won’t sit properly on them. In that case, the first indication of a problem might be that the slats fall out and need to be replaced. Always check the side rails for bowing, whenever replacing slats.

The problem comes in when the side rails are broken or even cracked. If it is only cracking, the cracks can be repaired as discussed earlier about fixing cracks in the wood. But what if the rails are actually broken?

One such way is to run the existing rails through a planer, turning them into nothing more than a thin outer coating, to be glued onto the new rails. With that done, the new rails can be made out of dimensional lumber, and that thin veneer laminated onto the outside. This allows the existing color and style to be maintained, without problem.

Another option, if that can’t be done, is to sister the existing rail from the inside, adding another layer of material. The problem here, is that there normally isn’t enough extra room on the inside of the rails, to add a ¾” thick board or piece of plywood. Since ½” plywood is often used for I-joists, that’s a possibility or a 1/8” thick steel plate can be screwed onto the inside of the rail.

Finally, there is the problem of broken or otherwise structurally compromised legs. This could be from cracking or from the legs actually breaking off. I had one four-poster bed, where half of the base of the leg peeled off, when the headboard was being drug down a ramp. The wood literally peeled off in layers.

Taking that ideal a step farther, the piece being added on might be able to be hidden, if the leg is sufficiently large to allow material to be removed from the inside of it, making a groove for a piece of supporting material to be installed. It doesn’t take all that big a piece of wood to support the weight on a bed, as all the weight is on the end grain. One inch will do. The main reason that larger pieces are used is for stability and style.

If the pieces of a broken leg are cut out, making a groove on the inner side where a one inch square piece of hardwood can be installed, then the entire leg can be glued back together, making it just about as strong as it originally was. The thicker leg provides stability, while the added piece provides the needed strength to support the load.