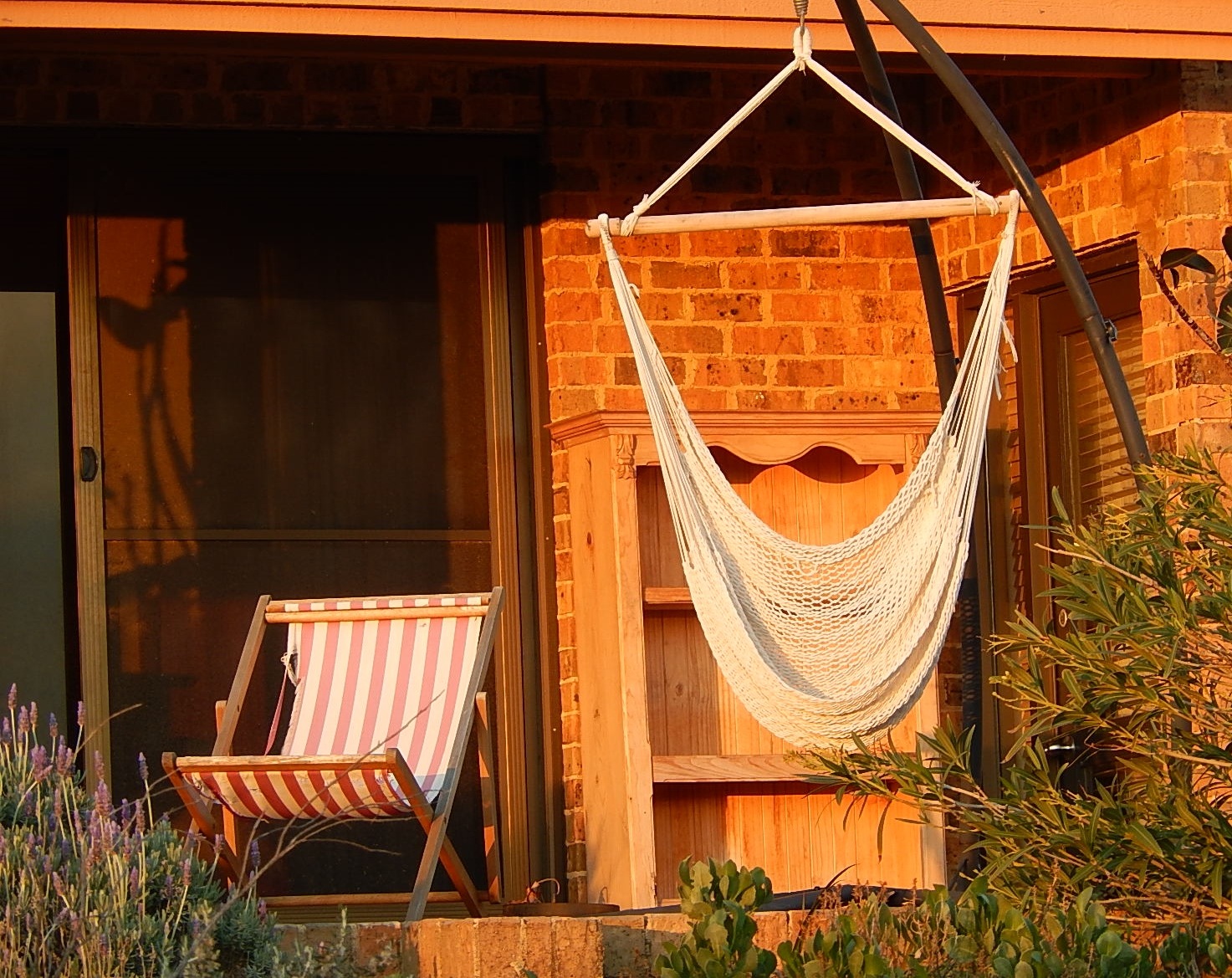 Those who have never had the opportunity to rest in a hammock don’t know what they are missing. Unlike most furniture, hammocks and hammock chairs provide even support across the body. Originally made in a fishnet pattern, they allow air movement all around the body, compared to upholstered chairs and mattresses, both of which act as insulation, heating up the person sitting or lying in the hammock or hammock chair. In a hammock, there is airflow all around the body, helping to keep the person cool, even without air conditioning.

The hammock goes back about 1,000 years, when it was invented by the Mayan people. In addition to providing a cooler way to sleep in a hot environment, the hammock provided the Mayan people with some protect while sleeping, keeping them above animals and insects that might attack them during the night. Hammocks are still widely used for sleeping in Southern Mexico and throughout Central America, although many families have both hammocks and beds.

Hammock chairs are a much more modern adaptation of the original hammock, allowing people to rest in the comfort of a hammock, without the need to learn how to sleep in a hammock. With them, roughly half of a hammock is suspended from a curved pole, allowing the netting to cup and create a seat. They are mostly a tourist item, sold to Americans who are visiting Mexico, although they have made their way to other parts of the world as well.

As the hammock chair has spread around the world people have made other adaptations to it. Today, it is possible to find wicker and metal hammock chairs, as well as woven ones. Cushioned hammock chairs are relatively common as well; both those which have removable cushions and those where the cushion forms part of the chair’s structure. While some of these lose aspects of the original hammock chair, they still provide a comfortable place to relax.

In Mexico, buildings are constructed out of concrete and cement blocks, so the hooks that are used are anchored into the concrete itself. However, they are hanging hammocks and not hammock chairs. Those require two mounting points, so the weight is distributed between the two. Mounting directly into the concrete provides a mounting that will withstand much more weight than required. But our construction here is of wood frame, so we need to use a mounting method that can work with the wood and which will not pull out.

Hanging a Hammock Chair to the Ceiling

There are a number of different hangers on the market, designed specifically for mounting hammocks. Most use two hole and a few use four. For best results, a screw with a deep thread should be used, such as a lag screw. Lag screws are also advantageous in that they have a hex head, making it easier to tighten them, than working with a screw that has a Phillips head.

The hammock chair must be mounted so that the wood frame is at least two feet from any wall to account for the chair swinging, without hitting the walls. The lag bolts must penetrate into the center of wood joists or studs that it is attached to. While people talk about hanging hammock chairs on the wall, that is rarely done, as it requires an extremely strong, cantilever mount. I have looked for such a mount and the only things I can find are adequate for hanging plants, but not for a hammock chair.

Locate the ceiling joist and determine its centerline. For maximum strength, it is necessary for the lag screw to go right into the center of the joist. If one of them is too close to the edge, there’s a chance of it coming out the side of the joist or splitting off a piece of the joist, eliminating any strength from that fastener.

Once the centerline of the ceiling joist has been located, mark hole locations for the lag screw, keeping in mind that the framework of the chair needs to be two feet from the wall. Drill pilot holes for the screws, before inserting them. inserting lag screws without pilot holes can put too much stress on the ceiling joist, with the risk of causing it to split. It is best to use the largest diameter lag screws that will fit through the hanger purchased.

The hanger kit will probably have come with a section of chain and a carabiner. The chain can be attached to the hanger and the carabiner used to attach the chain to the mounting ring on the chair. Using a carabiner allows the chair’s height to be adjusted as well.

Hanging a Hammock to the Wall

While hammock chairs are hung to the ceiling, hammocks are generally attached to the wall. Generally speaking, the hammock will be long enough that it will need to be hung across the room diagonally, going from corner to corner. This is advantageous, in that the strongest place on most walls is the corners. While single 2”x 4” studs are strong enough to hold the weight of the hammock and someone on it, that weight could flex the wall sufficiently to cause the drywall to crack.

Another good mounting place for wall-mounted hooks is at points where it is known that a wall “T’s” off on the other side. The combination of studs needed to build that corner, providing someplace to attach the ends of the drywall on the opposite side of the wall, create a structural strongpoint similar to the corner, which can better support the weight of the hammock and any movement.

If a home is being built and it is known that hammocks will be used in the home, it is a good idea to install 4”x 4” posts at the point where the hammocks will need to be attached, ensuring that there is adequate support to prevent flexing.

The same sort of anchors used for mounting the hammock chair to the ceiling can be used to mount the hammock to the wall and in much the same way, using the same size lag screw. As with mounting it to the ceiling, it is important to drill and screw into the center of the stud, for the most strength and to avoid any risk of the fastener breaking out to the side of the stud. The following chart can give an idea of how far above the floor the anchors should be mounted, based upon the size of the hammock and the distance between the mounting points.

Laying Down in a Hammock

Hammocks of the type that are used in Mexico and Central America don’t have sticks in the ends, holding the hammock material spread out. It is the use of those sticks which makes it difficult to balance in a hammock, because it causes people to try and lay down in-line with the hammock, rather than across it.

The right way to lay down in a hammock is to spread the netting out with your hands and sit down in the middle of it, both lengthwise and widthwise. Then lay back onto the netting, so that your body is at about a 45-degree angle to the line made from hanger point to hanger point. Once the body is laid down, the legs can be brought up, completing the 45-degree line. Laying in this way, it is impossible to fall out of the hammock and the hammock is able to support the body evenly, eliminating pressure points and making for some very comfortable sleep.