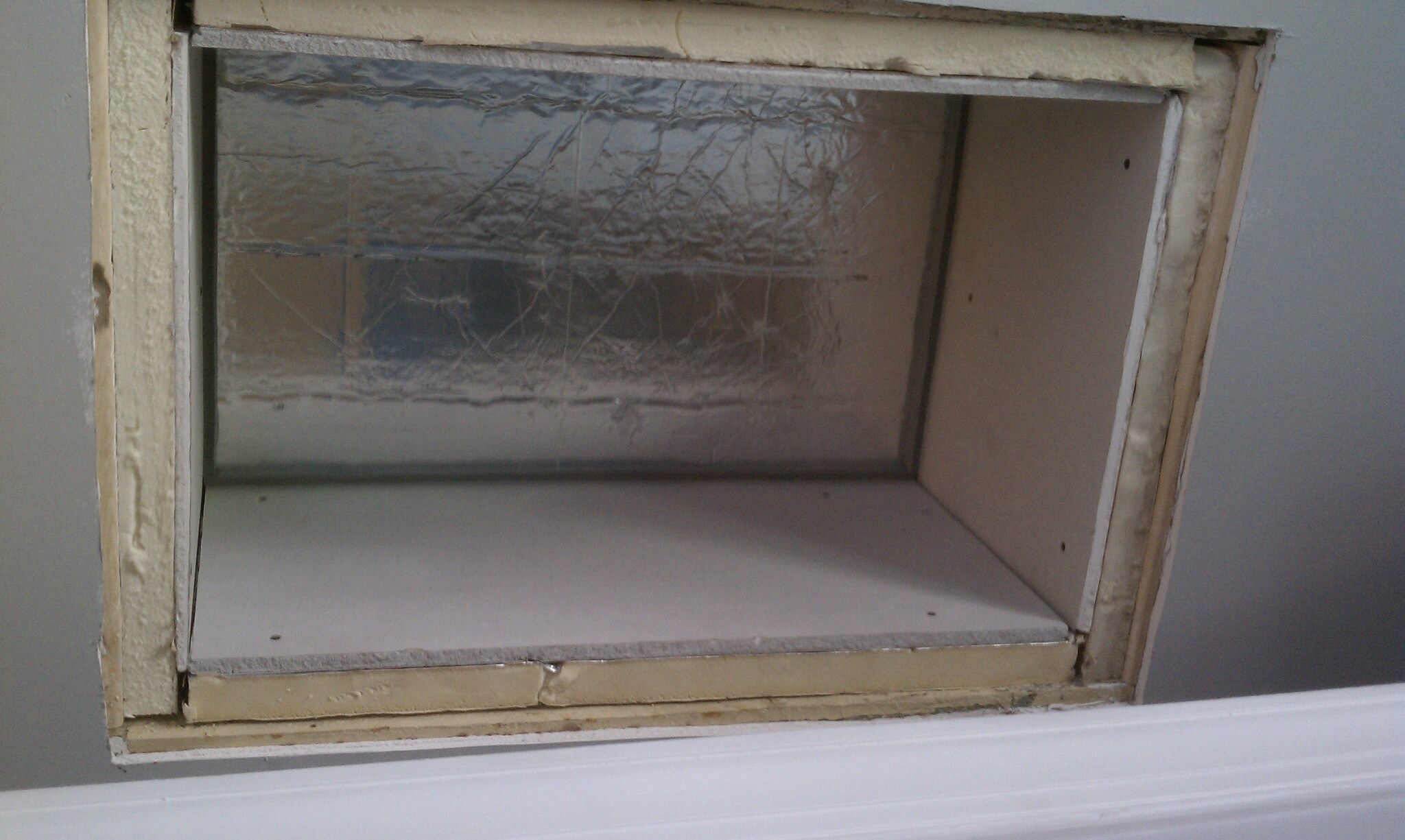 Insulating the attic of a home is important, considering that as much as 85% of a home’s heat loss takes place through the attic. This is a basic function of physics, since heat tends to rise. The attic hatch or ladder only accounts for a small part of the total ceiling in the home, but can cause a significant loss of heat, since the contractor rarely insulates it. This hole, properly called a “scuttle hole” might be located anywhere in the upper floor of a home, but is usually in the ceiling of either a closet or the hallway.

It is also possible to have an attic hatch in a wall, if part of the attic space has been converted into usable living space. If some of the attic is still left unfinished, a scuttle hole may be added in, usually in a closet, to allow access to the unfinished part of the attic; but this is not common, as most people finish the entire attic, if they choose to finish it.

Fortunately, it isn’t all that hard a problem for the homeowner to solve the problem of an attic hatch that isn’t insulated.  Adding insulation to an attic hatch is a project that shouldn’t take more than a couple of hours, even though it does require getting up on a ladder.

A scuttle hole must be not less than 22 x 30 inches, per building code. In addition, there must be 30” of headroom clearance from the bottom of the ceiling to the rafters. In the case where an attic ladder is installed, the normal opening size is larger, at 22.5” x 54”. There is also a significant difference in how the hatch cover mates up with the ceiling and seals off the hole, depending on whether or not an attic ladder is installed.

Typically, the attic hatch fills part of the space between two adjacent ceiling joists. There is no special requirement for framing this opening, so carpenters will usually use scrap 2”x 4”s or 2”x 6”s to match the size of the ceiling joists, nailed between the ceiling joists for the other two sides of the opening. In the case where loose-fill blown-in insulation is installed in the attic, spare pieces of OSB may very well be used to extend this opening farther up into the attic, as a measure to prevent the insulation from falling out when the attic hatch is opened.

Most contractors will frame the ceiling around the attic hatch with door casing to cover the cut edges of the drywall. If there is no attic ladder, this trim will overlap the edges of the hatch slightly, providing a ledge all the way around for the hatch to sit on. The hatch itself can be made out of drywall, although it is much better to use plywood. The edges of a drywall hatch would become damaged after repeated opening and closing.

The best material to use for insulating either a solo attic hatch or an attic hatch with a ladder installed is polystyrene rigid insulation. Multiple layers should be used to increase the insulating value and add weight, which will help the hatch to seal against the frame.

Insulating a Hatch without an Attic Ladder

Insulating an attic hatch without an attic ladder installed is extremely simple. But before starting, check what material the attic hatch is made of and the condition of the trim. If the hatch is made of drywall, it would be best to cut a new one out of plywood. That also means giving it a couple of good coats of paint and allowing that paint to dry before proceeding. Paint both sides, so that the plywood doesn’t warp from moisture.

If the trim isn’t properly installed it could leave gaps around the edges of the hatch, where the hatch doesn’t actually sit on the trim. It is also possible that the trim might have come loose over time. Sadly, many contractors treat this particular detail in the home as an afterthought and don’t properly measure the trim or install it with enough finish nails to hold it in place.

It is also a good idea to install self-adhesive weatherstripping to the top side of the trim, where the attic hatch will set down on it. While it might seem that the hatch itself will sit down on the trip, closing off any gaps, it usually doesn’t mate up that neatly. Adding the weatherstripping can prevent air leaks around the edges of the hatch.

Cut the polystyrene insulation ½” smaller than the attic hatch all the way around. As the insulation is not very thick (usually only ½”), it is best to use several layers; four is usually considered adequate, but more will give you added insulation, if there is room for them. These layers can be attached to each other and to the upper side of the attic hatch, with either double-sided duct tape or construction adhesive. The tape is easier to work with, but the adhesive will provide more weight, which is an advantage. If adhesive is used, allow it to dry before installing the hatch.

Set the hatch into the opening, insulation side up and verify that it seals all the way around the edges.

Insulating a Hatch with an Attic Ladder

In the case of attic hatches which have an attic ladder installed in them, the basic process of insulating the hatch is modified by having to deal with the ladder. The hatch itself is actually attached to the ladder, usually with only a small gap between them. Hopefully, one ½” layer of polystyrene insulation can be fit between the ladder and the latch, but it is unlikely more layers can.

To gain more insulation, another couple of layers of insulation can be cut to fit inside the vacant space between the ladder rungs. In order to do this, without making the rungs too shallow for safety, cut the insulation about two inches short of the vertical space available. Then install these pieces of insulation so that they leave that 2” gap right above the rung. That will provide room for stepping on the rung, while insulating the extra area where the feet don’t normally go. The area on the outside of the ladder can also be insulated; but don’t allow that insulation to overlap the hand grips on the ladder.

Vertical attic doors or hatches can be insulated in the same way as a horizontal one. The one big difference is that because the door or hatch is vertical, gravity is more likely to pull the insulation off of the door, over time. The key to preventing this is to use an abundance of adhesive, whether that be construction adhesive or double-sided duct tape.

As with the other possibilities we’ve discussed, weatherstripping should be installed around the edges of the hatch or door to ensure that air doesn’t leak through. More weatherstripping might actually be required than that for a hatch in the ceiling, because gravity or springs aren’t holding the door closed.

If a regular interior door was installed as the attic access, then it will have hinges and a door latch to hold it closed. But in the case where it is nothing more than a scuttle hole, carpenters usually put screw into the hatch cover to hold it in place. This is fine if the attic is not used, but if the attic is to be used for storage, it may be necessary to add some sort of latches and/or hinges to ensure that it is properly closed each time it is accessed.

The easiest way of insulating an attic hatch is to use an stairs Insulation Cover or Tent. There are several different versions of these, pretty much all made out of thin aluminum-faced insulating material. While they don’t provide as good an insulation layer as the polystyrene insulation, they are easy to install and virtually airtight.

The insulation tent can either be installed standing on the attic ladder or from inside the attic. Either way, the process is virtually identical. Before working with the insulating tent, clean off the tops of the ceiling joists or the attic floorboards. It may be necessary to use a degreaser for this.

With the flange area clean and dry, start by opening up the tent and spreading it out over the access hatch. Make sure that it is situated so that the open side of the flap is towards the direction of climbing up the stairs, so that the flap will not be in the way when stepping into the attic. Then open up the zipper flap and set it aside.

There should be adhesive strips on the bottom side of the tent’s flange, covered by paper. Starting with one of the long sides, peel off the paper strip and press the adhesive down on the top of the ceiling joists or the attic floorboards. Take care to keep the tent right up against the edge of the access hole and to lay the adhesive straight. By no means should it be pulled up and relocated. Continue removing the paper protective strip and sticking down the adhesive all the way around.

For additional strength, it is recommended to also staple down the insulating tent’s mounting flange with a staple gun and ½” staples. Staples should not be placed any more than 6” apart. Check that they went in all the way and tap them down with a hammer, if necessary.