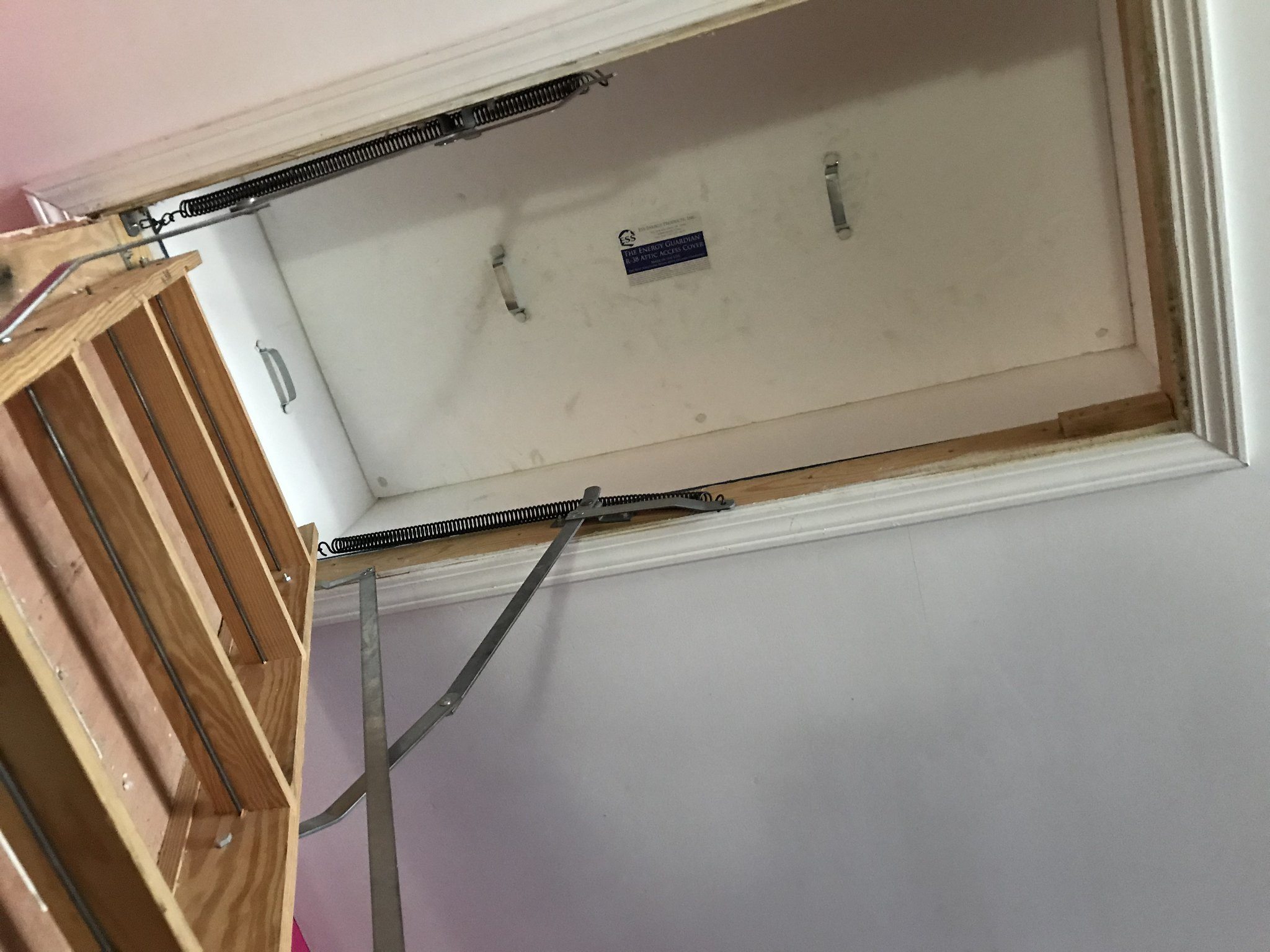 Attic stairs are a great convenience, making it easy to go up into the attic at any time and utilize the space up there for storage. While there have always been people who use a ladder to get up into their attic, attic stairs are much safer, as the ladder is anchored to the ceiling joists, preventing it from skidding out from under someone climbing it.

One problem with attic stairs is that most aren’t insulated. If you measure the temperature of the ceiling and the attic stair cover, you’ll find them to be quite different. What that means is that the heat or cold of your attic is radiating into your home, increasing your home heating and cooling costs.

This is more of an issue in the wintertime, than it is in the summertime, as heat rises and cold drops. So in the summer, when it’s hot in the attic, the heat radiating from the attic stair will warm the air near the ceiling, but that’s all. However, in the wintertime, the air that’s close to the attic stair will cool, dropping down to the floor and be replaced by fresh air which can also be cooled. While this is imperceptible due to the home’s HVAC system heating the home, it does make that system work a little bit harder to overcome the cold radiating down through the attic stairs.

It is possible to buy insulated attic stairs, but the insulation provided is only ½” thick Styrofoam, which doesn’t even cover the whole thing. While better than nothing, that’s not a great option. Something much heavier and thicker than that is needed, to keep the home’s heat from floating out through the roof.

A number of different companies have attacked this problem, producing an assortment of “tents” and “blankets” to address it. Many of these are essentially the same, made of an aluminized Mylar bubble pack. As such, the insulation they provide is thin. This is better than nothing; but still not really enough to meet the need.

There are also a few companies producing a box type attic stair cover, which provides considerably more insulation. One such unit, manufactured by Battic Door, claims to provide R-50 insulation level, making it probably the best commercially manufactured unit on the market. But in reality, when someone buys this sort of unit, they’re paying someone else to manufacture something they can very easily make themselves for considerably less.

Perhaps the best solution is to make a homemade cover out of polyisocyanurate foam (Polyiso), more commonly referred to as “foam board insulation.” However, this is not the white Styrofoam board that is just coated with a thin layer of plastic; it’s bonded to facing on both sides, one side of which is aluminum, to act as a heat reflector.

This rigid foam board insulation is a bit more expensive than the foam board that’s covered with clear plastic film, but not that much more expensive. That extra expense is quickly recouped in the greater efficiency in keeping the heat your furnace is producing in the home, where it belongs.

The idea is to make a box out of the insulation, which will fit inside the rafters and cover the stairs while in their folded position. To make this, it is necessary to be up in the attic, with the stair in the closed position, so some help will be needed. It’s also extremely helpful to have a floored over area in the attic in which to work. With most attic stairs, this requires a box that’s 22” x 54”and which will rise up above the joists by about 8”. While ½” thick Polyiso is manufactured, it’s best to use the 1” material for this.

Polyiso is easy to work with and can be cut with any utility knife with a blade that’s long enough to go through the material. A means of measuring and a straight edge will also be required.

Start by measuring how high a thick attic ladder is when folded, measuring from the top of the frame (not the rafters) to the top of the folded ladder. Add an inch to that for good measure. Then make a box out of the Polyiso to fit those dimensions. The box should be able to sit on top of the stair’s frame, when installed. Since the idea is to hold heat in the home, put the foil side down, towards the interior of the house, so that it can work to reflect heat back down into the home, rather than back down into the foam.

To attach the Polyiso together it is best to use Foil Tape, rather than Duct Tape. Foil Tape makes cleaner corner than Duct Tape does, adheres better and is not affected by heat the way that Duct Tape is. While more expensive, it will save money in that it won’t have to be replaced.

A single layer box, made out of 1” thick Polyiso, only provides R-6 of insulation value, nowhere near enough. So the next layer should be from the joists on up, doubling the insulation. This can be taped right to the first layer, including taping the inside corner made where the second layer sits on top of the joists. That’s one of those areas where the Foil Tape’s ability to make sharp corners is superior to Duct Tape.

When adding that second layer, stagger the cuts in the corner, so that they aren’t one on top of the other. In other words, if the first layer was made so that the long sides overlap the ends, make the second layer so that the ends are overlapping the sides. That way, there won’t be a gap where there is no insulation.

Another four to eight layers of 1” thick Polyiso should be added to the top of the cover, although it is not necessary to add it to the sides. With heat rising, it is the top of the box where the most heat can escape. Therefore, that’s the most important part to insulate thoroughly.

Even if two sheets of Polyiso are used to make the cover, it won’t weigh much. Polyiso weighs 2.5 lb/ft3. That works out to 6-2/3 pounds per sheet. So it won’t be difficult to move the cover, putting it in place and removing it to go up into the attic.

When pulling the ladder down to go up into the attic, the cover will need to be raised up and slid to one end, preferably the end that the ladder isn’t attached to. Obviously, it makes the most sense to move it in a way that gets it out of the way and won’t be in the way of climbing off the ladder into the attic space. Sliding it means that only a fraction of the weight needs to be lifted, as the majority of the weight will be carried by whatever the cover is sitting on. This makes it easily usable by women and children as well.

Always make sure that the cover seats fully when slid back in place, and that there are no gaps around the edges, between the cover and the ladder’s frame. Even a small gap will allow heat to escape and cold to get into the home.