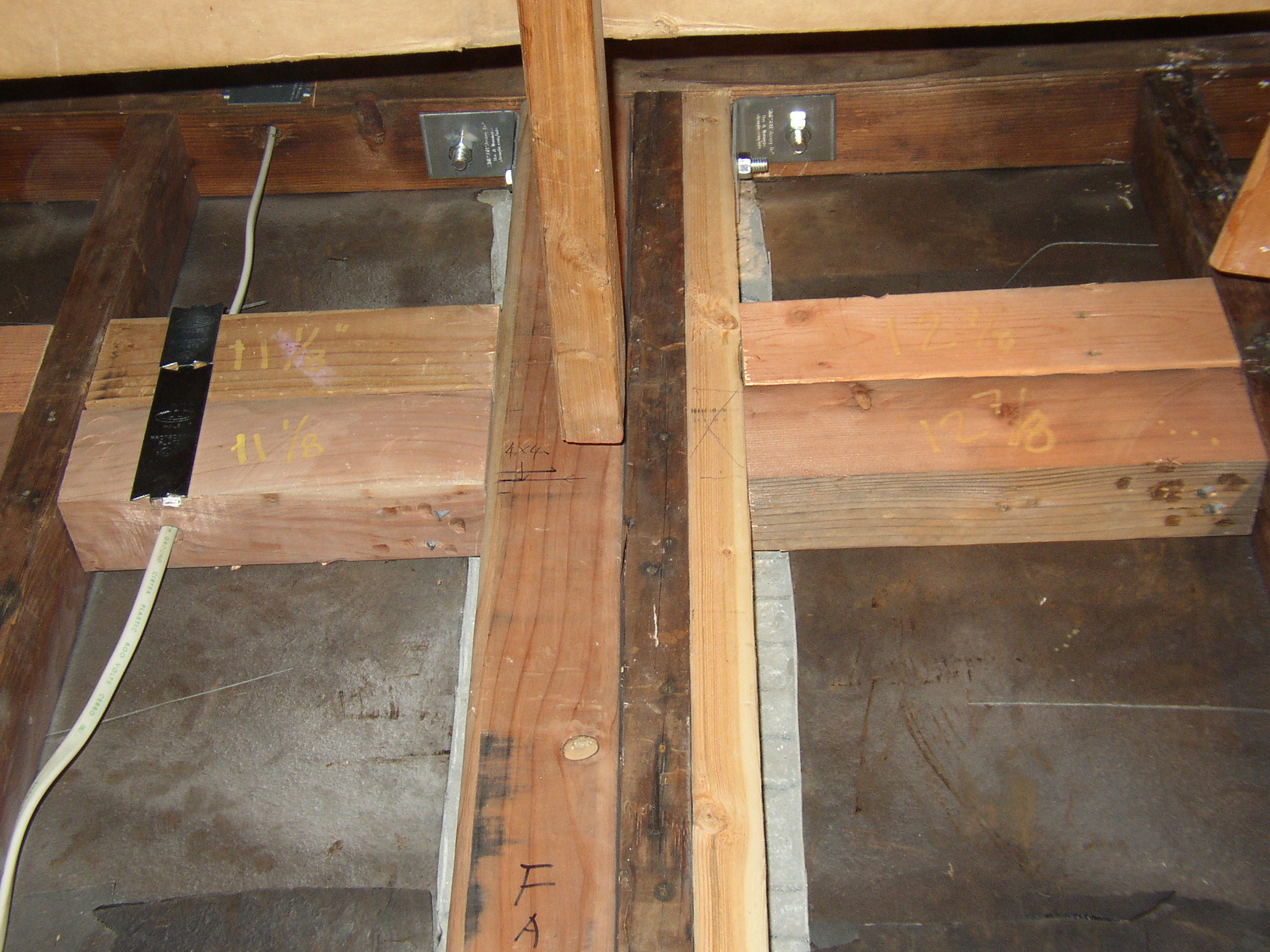 Perhaps the most challenging nailing technique to master is that of toe nailing, also referred to as “skew-nailing.” However, there are times when toe nailing is essential, especially in framing homes. It is most often used when a board’s surface is unavailable for face nailing.

For clarification, face nailing is the term used to refer to nailing through the face of one board, into any part of another board. In the case of framing a wall, the face of the board is in reference to the bottom side of the floor plate and the nail passes through that plate, straight into the end of the 2”x 4” stud.

Toe nailing is used when attaching two boards, usually dimensional lumber, at a 90 degree angle, such as installing a stud, when the floor plate is already installed in place. While it is often preferable to build the wall flat on the floor, allowing the studs to be face nailed through the plate and into the end of the studs; that only works when building a new wall. If the wall framing is already in place and studs need to be added for a remodeling project, then an alternative means of fastening the new stud is required; hence, toe nailing.

The origins of the term toe nailing are unknown. There are a number of theories, the most likely being that it comes from horseshoeing, where the nails put into the front or toe of the shoe are referred to as “toe nails.” Those put in the back of the shoe are referred to as “heel nails.” While the same horseshoeing nails are used for both, the method of putting them in is somewhat different.

While toe nailing is difficult to master, it is actually stronger than face nailing, even though smaller nails are used. What makes it stronger is that the nails are pounded into the wood at about a 45 degree angle. This makes them harder to remove, either intentionally or through the normal settling and movement of the house. In contrast, if only face nailing is used, pulling the boards apart with enough force will pull the nails out. That can’t be done when toe nailing is used.

Actually, to remove a board that has been toe nailed in place, either the mils need to be removed first or they need to be cut. This can be done neatly or messily, but the fact remains the same. The mechanical forces involved make crossing angled nails much stronger than nails going straight into the end grain.

I need to add here that nailing into end grain provides a tenuous joint at best. Nailing is better than screwing or gluing, because nailing depends on compression. Even so, as that wood dries (and very little truly dry wood is sold in the lumberyard) it will shrink away from the nail, weakening the joint.

How to Toe Nail

While toe nailing is a bit tricky to master, anyone can. Mastering it is more about becoming accustomed to the distances and angles involved, as well as the traveling the wood being toe nailed will do.

The proper nail to use for toe nailing is an 8d (8 penny) box nail. This is long enough to go through the stud at an angle and at least one inch into the plate. A 16d nail could be used, giving another half inch; but the thicker wire used to make those nails will make it harder to drive into the wood.

Before nailing, measure the floor plate, drawing lines on both sides of where the stud is to be installed. Set the stud in place and then take the nail and hold it up to the side of the stud, angling it down to get an idea of where it needs to enter the stud, so that it will go into the plate as well. This is usually about 1-1/8” to 1-1/4” above the plate.

It will be necessary to hold the stud in place with the toe of a work boot while toe nailing it. The force of driving the nail will tend to push the stud to the side and it is necessary to counter that movement. Even so, start with the stud a bit off the line (about ¼” to 3/8”), towards the side the nail is being driven in from, so that it can move some, without messing up the alignment.

It’s best to start the nail perpendicularly into the wood, driving it in only about ¼”. This provides a “pocket” for the nail to set into, so that they don’t slip down the face of the stud when pounding them in. Once the point of the nail is in the wood, lift the head of the nail, angling it at 45 to 50 degrees. Then pound it home.

In order to make it easy to get a good swing on the hammer, making it possible to drive the nail in easily, stand behind the stud being nailed. This will allow a full swing of the hammer, starting with the hammer up in the air and coming down to where the nail is in one smooth arc.

A second nail should always be driven in from the other side, making the two nails cross. This will also drive the stud back in the other direction, evening the position out so that it lines up with the marks made on the floor plate. Actually, two nails are often driven in from each side, making for a very strong mechanical joint.

Toe Nailing with a Nail Gun

Toe nailing can also be accomplished with a nail gun. This is actually considerably easier, as it is not necessary to judge how far to set the stud off of the mark on the floor plate, to ensure it will end up aligned. The pneumatic nailer drives the nail in so quickly, that it doesn’t push the stud to the side. So not only does it save labor, but in this case at least, the pneumatic nailer makes for more accurate placement of the studs.

While it is possible to find 8d nails for a framing nailer, most carpenters use 16d nails when toe nailing with a pneumatic nailer. Part of the justification for this is ease of work; not having to change out the nails. Even so, the 16d nails manufactured for the nail gun are closer to the diameter of normal 8d box nails, than they are to the 16d ones. This lessens the potential for splitting that drove the decision to go with the 8d nails in the first place.

When installing floor joists, toe nailing is often combined with the use of joist hangers. These are metal brackets, designed for accurate placement of the joist, as well as a strong connection between the joist and the header joist.

Whereas toe nailing is stronger than face nailing, using a joist hanger is even stronger. It essentially combines the necessary connection between the floor joist and header joist, with the idea of having a hurricane clip to hold the two together. Part of this strength comes from the strength of the hanger itself and part comes from the fact that it is used in conjunction with toe nailing.

It is always important to use the right size joist hanger for the joist being installed. If too small a joist hanger is selected, it will not provide adequate support to the joist, and won’t pass inspection. If too long a joist hanger is used, the ends will stick up above the top of the joists and will need to be cut off, before the subflooring can be installed.

The box for the joist hangers will recommend what size nails to use. Always use that size, as the hanger has been designed to work with it. Using a smaller or larger nail will affect the strength and using a larger one will probably cause the ends of the nails to come through the header joist. Always nail through all holes in the joist hanger, not forsaking any.

With all the nails driven into the hanger, the temporary block, used to set the joist in place, can be removed.