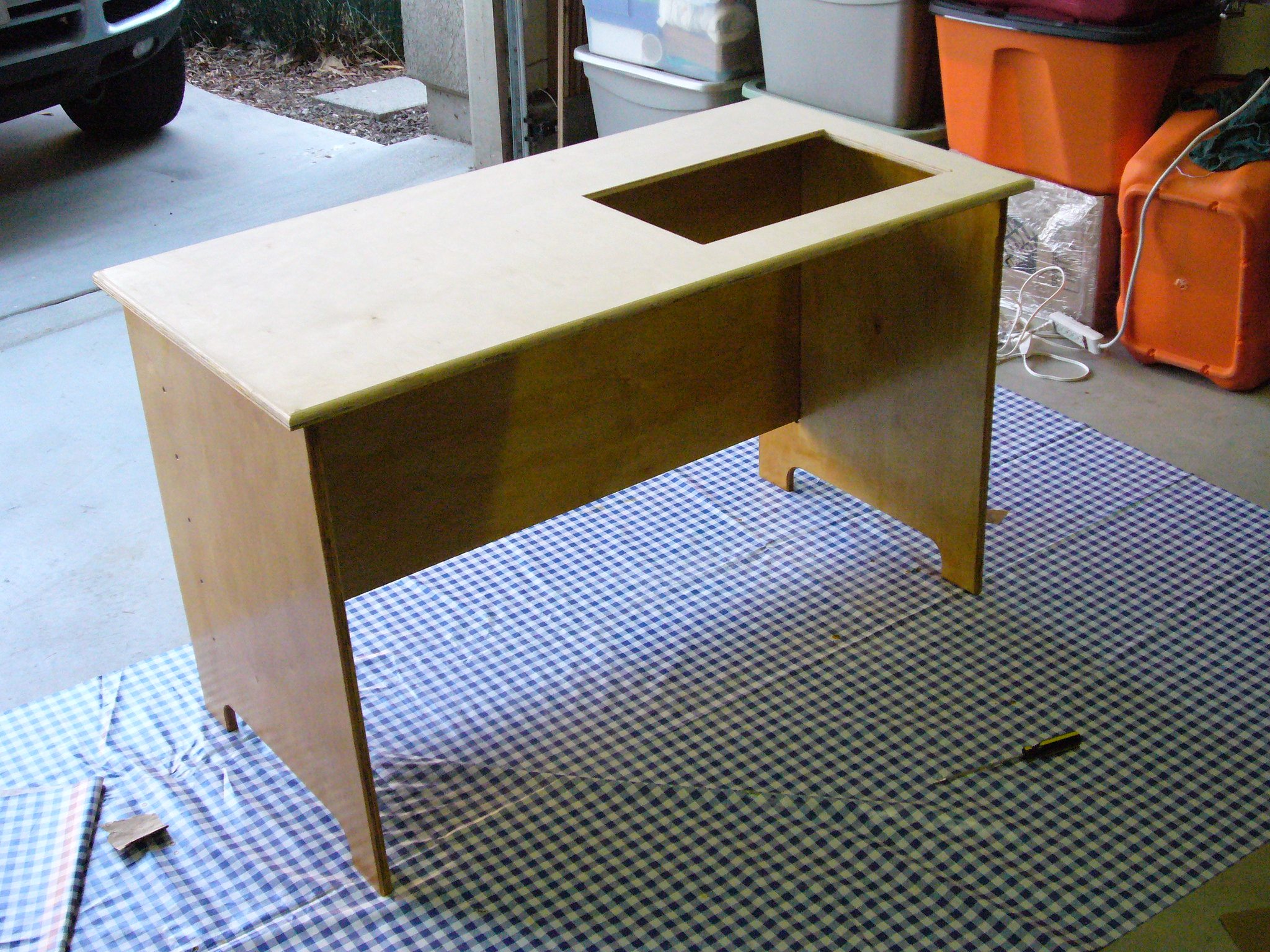 Sewing is one of the oldest trades and usually the first sort of cottage industry to emerge in an industrializing society. We all need clothing and the industry that makes that clothing is one of the more essential ones to society. Yet today, that work is carried out by major corporations, with most of the actual work being done overseas.

Yet while there is no “need” to make our own clothing today, there are many women and a few men, who enjoy making clothing as a hobby. Sewing can be relaxing for these people and give them a sense of accomplishment. It’s also a great way for someone to develop their own style, wearing what they want, rather than just what they can find in the stores.

While one can easily sew on the dining room table, people who really get into sewing like having a permanent setup just like anyone else who has any other hobby. The argument can fairly be made that if a man has a workshop for his woodworking and his wife wants a sewing room, there’s no reason for him to not make her one.

It Starts with a Table

Any sewing machine table starts out with the idea of a table. So let’s talk about making a basic table. Some of this might change when the storage is designed in, but starting with a basic table gives us the understanding of everything that the table itself needs, in order to be functional.

Any table consists of a table top and legs. But legs can refer to a number of different things, from four individual legs on the corner to a central pillar that supports everything. But for a worktable, such as this, the four legs at the corners are the common way to go. Not only is that easier to build; but it will result in a much more stable table, an important consideration.

Let me interject a note here, before going on. In the case that cabinetry is added to the table, which it most likely will be, that cabinetry will probably replace at least two of the legs. If cabinets are added on both sides, like what would be found on a double-pedestal desk, then the cabinetry will take over the function of all four legs.

A sewing table can be literally any size, from something that’s only about 16” x 36” up to a full sheet of 4’x 8’ plywood. They can even be L-shaped. How big any particular sewing table ends up being depends more on the available space than anything else. Generally speaking, sewing tables end up in a room that’s used for other things, so a large table might only be used in cases where there’s an actual sewing room in the house.

I will say this from experience though, the larger the table, the better. It’s not so much that a large table is needed for the actual sewing, as that space is needed for laying out, cutting and pinning the project being sewn. If not enough space is available, the table ends up becoming an irritant, rather than a help.

As with any other table, just about any wood product can be used for the tabletop. For a nicer sewing table, it would make sense to use hardwood plywood or to laminate boards together to make it. But if functionality is the focus, then MDF with hardwood edges is ideal.

One option if a bigger sewing table is needed, but there isn’t enough room to keep it set up all the time is to make the tabletop so that a portion or portions of it fold over and lay flat on the table. That would allow them to be folded up when not in use; saving space. Some sort of leg or support would be required for that folding portion when it is in use.

A thick tabletop is not needed, as it won’t be supporting a lot of weight. If that’s all that’s wanted, then edge banding or wood edging can be used on the edges of the MDF. On the other hand, it’s nice to make the edge thicker than the ¾” MDF being used for the table’s surface. Hardwood 1”x 2”s can be ripped down thinner and then rabbitted to insert the edge of the MDF into, then planed smooth with the surface.

Another consideration that works out well is to cover the tabletop with thick fabric. This allows the tabletop to be used as an ironing board as well, which can be advantageous when trying to sew a project. Before gluing on the fabric, round the edges of the table with a router, so that they don’t wear through the fabric. Then the fabric can be glued to the surface with spray adhesive, wrapping it around the edges to the bottom side.

For most tables, the legs are not actually attached to the table top itself, as that wouldn’t be very strong. Rather, they are attached to a skirt that’s mounted to the bottom side of the tabletop. This skirt is usually 3” to 4” high, and made of nominal 1” material, mounted perpendicular to the surface of the table. Skirting can be installed directly on the edge of the table, but it is usually inset by a few inches. For appearance sake, it should be mitered, but a simple butt joint is serviceable.

The skirt is necessary because the table legs will wobble and eventually break away from the tabletop if they are connected directly. There are two reasons for this. One is that the glue is applied to the end grain of the legs themselves, which doesn’t hold as well. The other reason is that there is nothing to give the table any structural strength, preventing it from moving back and forth. It’s not exactly visible, but the skirt provides what is essentially a triangular bracing for the leg, giving it strength.

The boards making up the skirt should be glued and fastened to the tabletop. This can be by nailing through the tabletop itself. Another option is to use pocket screw from below, leaving the tabletop unmarred. If screws are used, they should be deck screws, as those have a deeper thread, a necessity for MDF. In any case, wood glue needs to be used, along with the fasteners.

The legs can then be attached to the inside of the corners made in the skirt. Many commercially manufactured tables use a diagonal block across the corner of the skirt, trapping the leg in place. But it works just about as good to nail through the skirt into the leg from both sides. Be sure to glue the leg to the skirt as well, for maximum strength.

There are countless options for the legs themselves. A simple 2”x 2” or 3”x 3” can be used. It’s also possible to buy turned legs to use. if nobody cares about how it looks, 2”x 4”s make strong legs.

Countless options exist for adding cabinets to the sewing table. A lot depends on the skill of the woodworker and how much time they’re willing to put into the project. Shelves and cubby hole are easy ways to add storage space, if the time to make drawers is too much of an investment. Baskets or bins can be placed in the cubbyholes to store smaller items.

However, drawers are better, especially specialty drawers that are made for specific items used in sewing. Adding drawers especially made for filing patterns, keeping findings and other necessities is all but essential for a good sewing table. Spool holders for thread can be even better, setting the table apart as being a sewing table and making it easier to use.

It’s best to use drawer slides on the drawers, rather than just allowing for a wood to wood slide. While most of the items being stored in the sewing table are lightweight, drawer slide still make it easier to open and shut the drawers, making the table easier to use.

The Sewing Machine Itself

Probably the most important part of building any sewing table is having somewhere for the sewing machine to sit. Some old fashioned sewing machines used to be manufactured without so much of a lower cover on them, with the idea that they would be set into a table. But today’s machines don’t typically have that option. But it’s still nice to be able to set it down into the table, so that the sewing machine bed and needle throat plate are flush with the tabletop.

This is most easily done by using the sewing machine itself as a pattern to determine how big a cutout to make for it. Round the edges to match the sewing machine and attach a shelf just far enough under the tabletop so that the machine’s bed can sit at the right height.

All that’s needed to add this shelf is two spacers, ripped from some dimensional lumber and a piece of plywood that’s bigger than the opening in the tabletop. It’s best to run the two support pieces so that they are parallel with the ends of the sewing machine, not the sides. That leaves the front side open, so that the bobbin case can be accessed.

It’s not all that common anymore, but the old time sewing machine tables had a hinged piece of the tabletop, about two to three inches across, that went the width of the machine. This could then be flipped up, out of the way, so that the bobbin could be changed. This is an easy addition, which makes it much easier to work with the machine. If this is not done, then the machine has to be lifted out of the table to change the bobbin.

Another way this can be made is to remove the bed extension cover, as is needed for access to the bobbin cover. Then the cut is flip-up cover so that it fills that area, as well. This provides more flexibility and makes it even easier to change the bobbin, as that cover needs to be removed to have access.

Of course, we can avoid hinging that part by making the same piece as an insert, which is set in place after the sewing machine is in place. That might save some difficulty in making things fit together and is still quite functional.

Adding in a Lift Mechanism

Probably the easiest way to accomplish that is to lift the machine out of the table and have a cubbyhole for it to be stored in. An insert can then be made to go in the hole where the sewing machine fits. But that’s not the only option to be considered.

There are commercially manufactured sewing machine lifts, which are designed to mount inside a sewing machine table, allowing the sewing machine to be lifted and lowered easily. The lift mechanism needs some structural elements to attach to, but nothing stronger than a 1”x 2”. When in the lowered position the opening can be covered.

For those that don’t want to pay for one of those mechanisms, there are a number of different things which people have done, designing their own lift. Probably the easiest of these is to use a car jack, like a scissors jack. A similar sort of mechanism, with a larger table, exists commercially and is used in factories. The big advantage of using that, rather than a car jack, is that it wouldn’t need any guides to hold the sewing machine straight and level, like would be needed with a car jack.