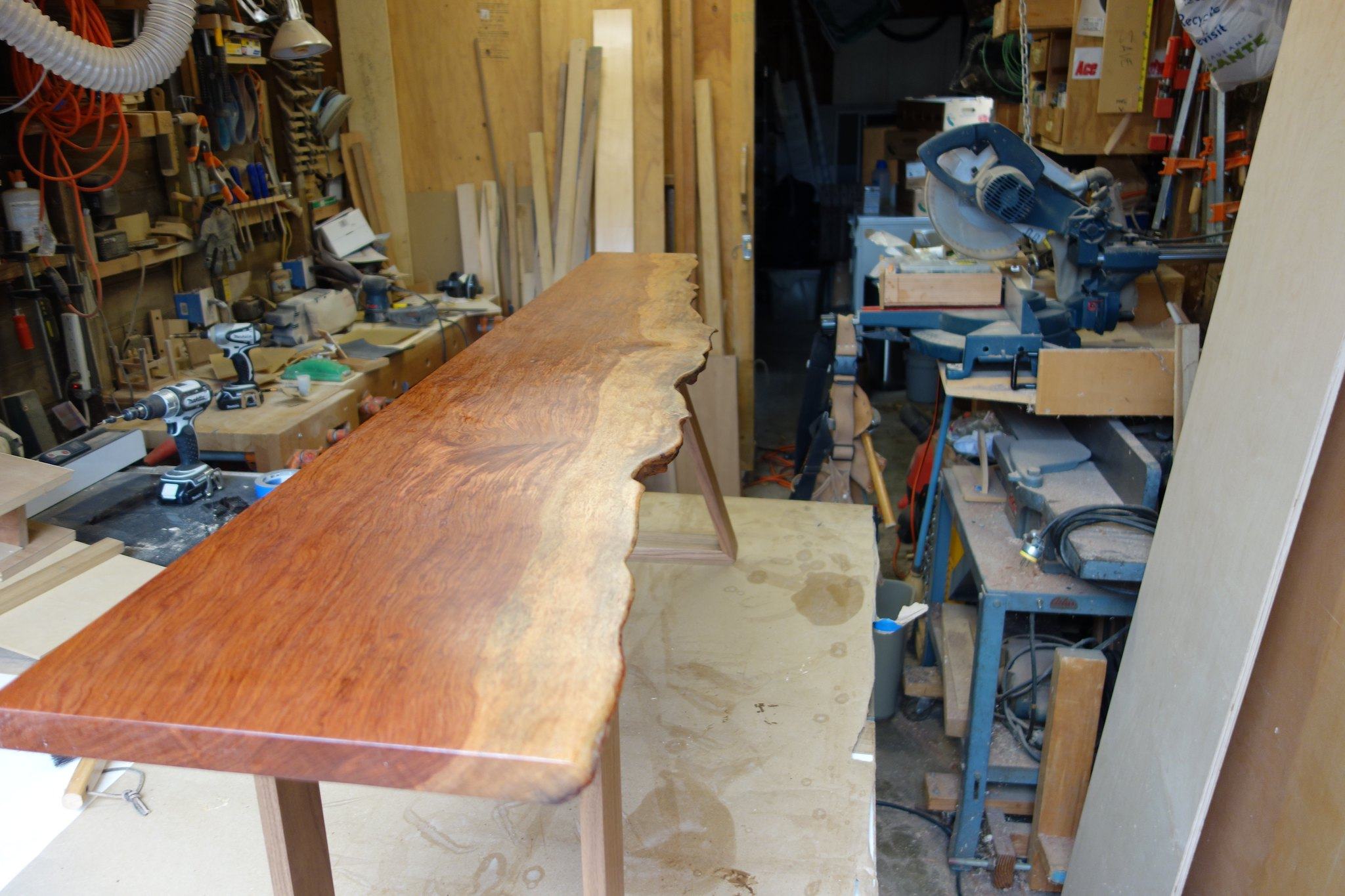 Padauk is a beautiful wood with strong reddish hues. Cut from the tree bearing the same name, the wood starts out a bright red, darkening to a reddish-brown, almost purple color over time. This color change can be slowed somewhat by the application of finishes which have been developed to protect the wood from ultraviolet rays. Some people confuse it with rosewood, but it is clearly redder than the more expensive wood rosewood. This species of wood is the most often mispronounced, due to its spelling. Phonetically, it is pronounced as if it were spelled puh-dowk.

Most of the padauk wood we find is of the African variety, although there is also a variety from Burma, which is both harder and more expensive, although the appearance is very similar. The grain of this wood is very open, with a porous endgrain. Grain lines are rather obvious, with the grain interlocking at times. This can make it a bit difficult to work with, although it is highly stable once worked.

The padauk tree grows in the tropical parts of central and western Africa. Mature trees range from 100 to 130 feet tall; with a trunk that is 2 to 4 feet in diameter. It is exceptionally hard, with a janka hardness rating of 1,970 lbf. That’s roughly 50% harder than oak and a little harder than rosewood, but only about 2/3 as hard as ebony. The padauk is not endangered in any way, so there is no shortage of the wood or risk that it will no longer be allowed to be imported.

However, padauk is relatively inexpensive for imported hardwood, which, along with its unique coloration makes it a fairly popular wood amongst woodworkers. It is most commonly used for turned objects, musical instruments, furniture and small wood items, such as tool handles. A rather unique use of padauk is in the making of marimbas (wooden xylophones), which are traditionally made of rosewood. Padauk provides good resonance and sound, without the high cost of rosewood, making it a good choice for lower-cost marimbas used for practice or in the home. The sound produced by a padauk marimba is not as loud as that produced by a rosewood one. Commercially padauk is also used in the manufacture of flooring.

When working with padauk, one will quickly notice that it has a faint, pleasant odor when cut. However some people do have allergic reactions to it when working with it, especially respiratory symptoms. This can be reduced by avoiding dust from this wood, specifically through wearing a good mask or respirator. The hardness can also make it difficult to work with, especially planning the end grain.

That hardness of this wood also provides the advantage of making the wood highly resistant to decay, as well as damage from wood-eating insects. Few woods are totally immune to wood-eating insects, but padauk is resistant to them. This makes it an ideal choice in applications where it might be susceptible to moisture or attacked by insects.

Padauk wood is not difficult to find from wood suppliers specializing in domestic and imported hardwoods. Many vendors sell it in thin boards, which are popular for detail work and some crafts type woodworking projects. Most suppliers define it as an “exotic lumber” although the pricing isn’t as high as most exotic hardwoods. Plywood is harder to come by, but is available.