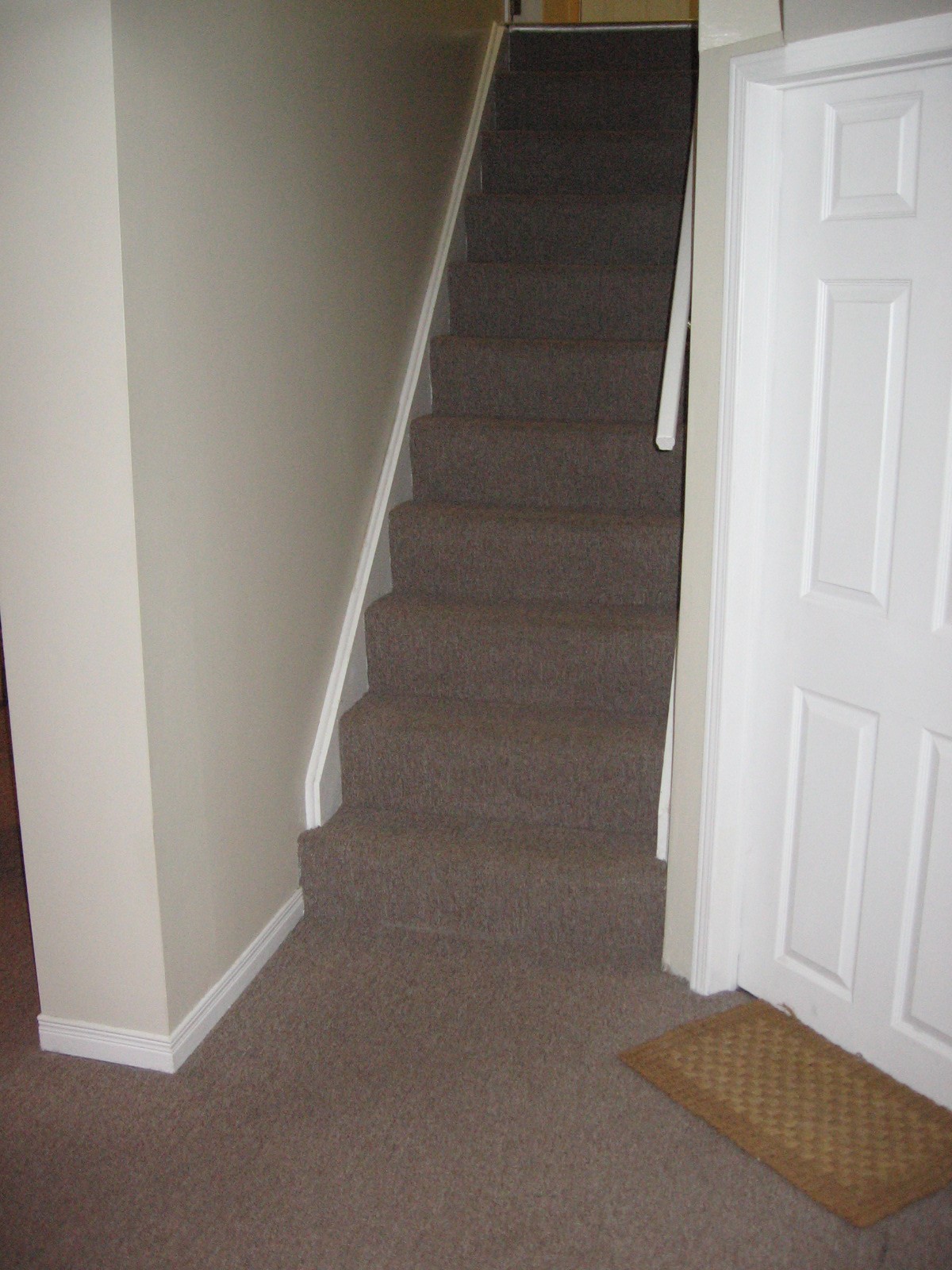 Over one million accidents per year happen on home stairways. This accounts for up to 36 percent of all in-home accidents and includes 12,000 accidents that lead to death. While the leading causes of those stairway slips are cracked flooring, torn carpeting and frayed carpeting, a considerable number of them are due to slippery stair treads. This problem is especially acute when liquids are spilled on the steps. More accidents happen when people are going down the stairs, rather than up them, probably due to them moving faster.

Before discussing how to make stair treads less slippery, allow me to mention the importance of maintenance. All three of the prime causes of accidents on stairs are maintenance issues; cracked flooring, torn carpeting and frayed carpeting. Before any of us rush off to do “something new” with our stairs, it’s probably a good idea to just check what condition they are in and make sure that it’s not just a maintenance issue. Adding carpeting over a cracked and/or stair tread doesn’t make sense and probably isn’t going to prevent an accident.

While looking at the condition of the stairs, check to ensure that the rise and run of the stairs is consistent. The building code only allows a small window of variance in these dimensions, as it has been demonstrated that uneven stairs can lead to accidents. But if the home is an older one or was built by the original owner, there is a chance that not enough attention was paid to these details. If the stairs are inconsistent, it may be necessary to replace them, in order to eliminate the hazard.

Of course the other thing that can be considered a “maintenance issue” is clutter on the stairs. Children, especially small children, have a tendency to drop things wherever. Whether that is on the stairs or in the middle of the floor is immaterial to them; but causes all sorts of trip hazards. Sadly, we adults can be almost as bad, setting things on the steps to remind us to take them up or down as the case may be. While those are usually only on the sides of the steps, they can still be trip hazards.

If there are only minor inconsistencies with the stairs, but they still bother your family, it may be possible to fix the problem by shimming individual stair treads. Don’t assume that uneven stairs means a multi-thousand dollar repair job, until less expensive options have been exhausted.

It’s clear that wood stairs are normally going to be slippery. New wood stairs are sanded smooth and then made even smoother by varnishing them. As those stairs are used and age, the varnish will wear off; but the same abrasive action that will wear the varnish off will also serve to polish the wood, keeping it slick. We need to do something to modify those stairs, in order to lower the chance of accidents. At the same time, we’ve probably spent the money on hardwood stairs, because we love how they look. So the trick is finding a way to maintain the attractiveness of the wood, while also ensuring that it is safe for our families to run down at the same time.

Stairs are not only slippery because of the finish on them, but also because dust and dirt settles on them, just like it does on every other area of our homes. That dirt can act as miniature ball-bearings, rolling under our feet or our shoes when we step on it. The rolling is made even more dangerous when we land on the dirt at a more acute angle, allowing it to try and slip out from under our feet.

The simple act of keeping the stairs clean can go a long way towards keeping them safe. While the surface will still be smooth and can be slippery, especially if a liquid is spilled on it, it will not be anywhere near as dangerous as a slightly dangerous stairwell would be.

One of the problems that many people have in keeping their hardwood stairs clean is using the wrong cleaning products. Microfiber dust mops or wet mops are much better at capturing small particles of dirt than normal dust mops and wet mops are. Used together with a cleaning product created specifically for hardwood floors, these mops have a much better chance of getting rid of the dust and dirt that makes the stairs slippery.

Always dry the stairs after cleaning, as the leftover water and/or cleaning solution acts as a lubricant, making the stairs more slippery if anyone walks on them. Walking up or down wet stairs, without the awareness that they are wet, can quickly become a very dangerous situation.

Use an Anti-slip Floor Finish

Probably the least intrusive method of making those stairs less slippery is applying some sort of anti-slip floor finish. There are actually a number of different finishes on the market, which fit into this category. Both clear and colored finishes (paint) exist, made from a variety of different materials. Some of these add a form of filler into the finish, which creates a rough textured surface.

There are also additives which can be used in conjunction with paint products. If you’re going to paint the stairs anyway, this is like adding a small bucket of sand to your paint, creating a surface like sandpaper. While very effective, this is not the most attractive option out there.

Probably the most common way of dealing with slippery stairs is to carpet them. Residential grade carpeting is generally much less slippery than stairs are, although well-work carpeting can be slippery as well. Commercial carpeting is often somewhere in-between, as the pile is denser and shorter than that used for residential carpets.

Carpeting the stairs doesn’t mean that the beauty of the wood stair treads must be totally hidden. It is possible to install carpeting only on the center part of the treads, where everyone walks, while leaving the ends of the tread wood. This would give the impression of having a stair runner installed on the stair.

If installing carpeting on just the center of the stairs is going to give the impression of a stair runner, then why not just use a runner? There might be several reasons for this, chief amongst them being that a runner looks different than carpeting, in that it usually has more of a pattern to it. So it depends on the look that the homeowner wants to achieve.

Runners are often laid on stairs, held in place with metal bars. While those bars hold the treads in place, they aren’t as secure as an actual carpet installation. Adding a non-slip rug gripper to the edge of the step tread, under the runner, will make it more secure and less likely to move.

Somewhat of a hybrid between carpeting and anti-slip stair tape is non-slip carpet stair treads. These are small pieces of hemmed carpeting, backed with a non-skid backing that prevents them from moving on the stairs.  Once applied, they will stay in place; but can still be removed for cleaning. Unlike other carpeting options, these can be machine washed to help keep them clean and new looking.

There are a number of different types of anti-slip tapes that can be applied to the stair treads, including some that are clear. However, the transparent tapes are harder to keep clean, so may not appear clear on the stairs. Darker colored anti-slip stair tape is easier to keep clean and more durable, but not the most attractive option to put on the stairs. In the end, determining which tape to use is a tossup between different priorities.

Similar to anti-slip stair tape, these clear, textured strips are adhesive-backed for applying to stairs. But rather than having an abrasive surface to provide their anti-slip grip, the plastic has a molded-in texture. This is advantageous with toddlers just learning to climb up and down stairs, as it is not abrasive on their skin. It is also easier on the soles of shoes.

The one drawback to these clear stair strips is that, like the clear stair tape, they can trap dirt, requiring a little effort in cleaning. The strips themselves are extremely easy to clean; but there is a potential for dirt to get under the edges or trapped up against the edges, requiring extra effort to clean off.