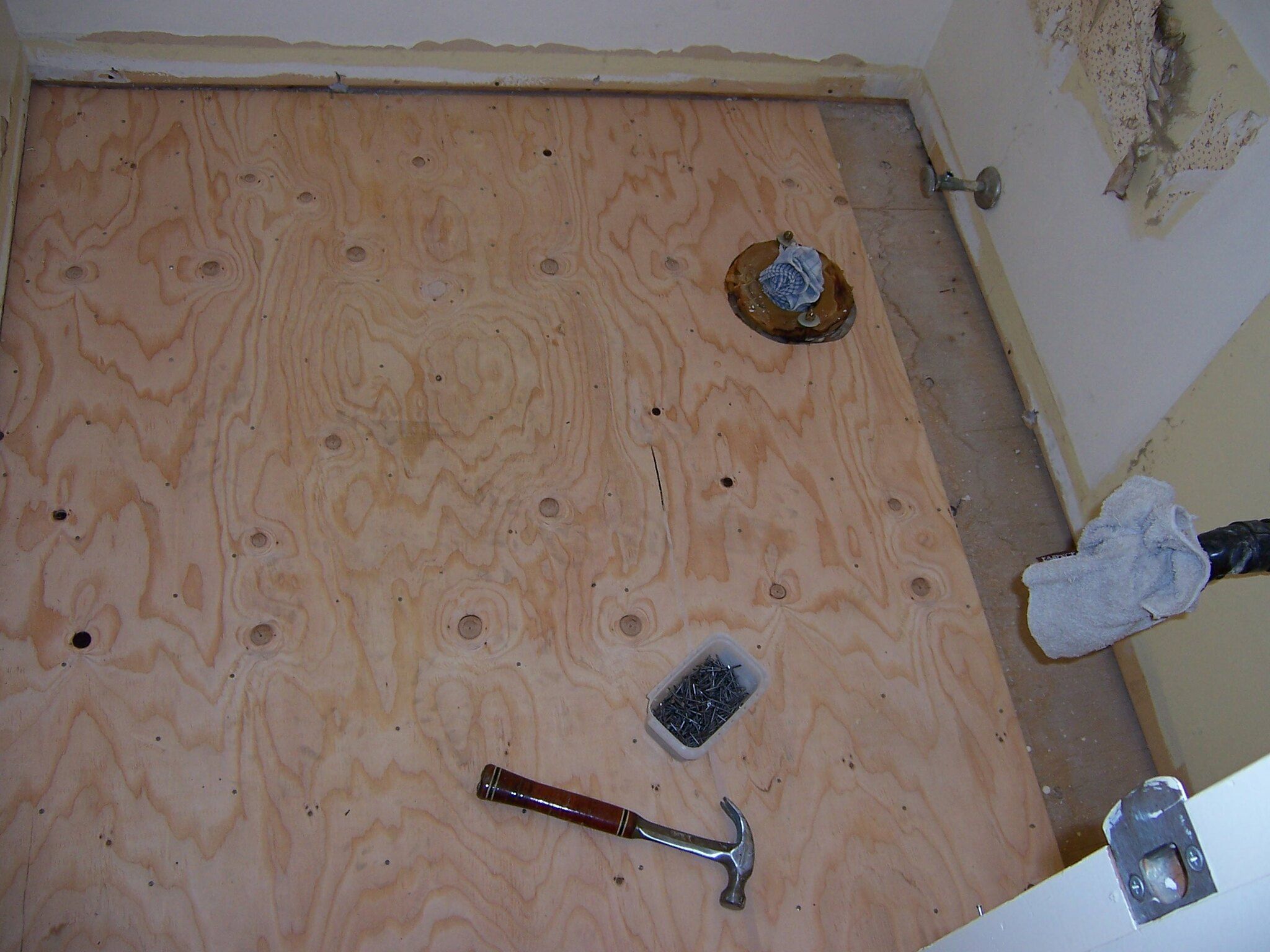 When a home’s subflooring becomes rotted, either due to a roofing leak or a plumbing leak, the subfloor has to be removed and replaced. This is a safety issue, so it’s not something to be left for another day. By the time the homeowner notices it, the rotting has probably reached the point where there’s a risk of someone actually stepping through the floor, especially if they are a bit on the heavy side.

Replacing a damaged subfloor can be one of the more challenging home repair tasks, especially if it is in a bathroom, which is the most likely place to find damaged subflooring. The tight confines of a bathroom make the project particularly challenging, especially if the floor joists aren’t laid out in such a way as to provide ready support for the repairs that need to be done.

For this reason, some homeowners might choose to pay a carpenter to come in and make the repair, even if they are do-it-yourselfers. Most will charge for this sort of a project on a time and materials basis, rather than a straight bid, simply because they don’t know how serious the problem is or how much they’re going to have to repair, until they cut into the floor and remove the damaged part. By then, it’s too late to be giving a bid.

So, what does that cost? Depending on the materials used, it can be anywhere from $2 to $10 per square foot, depending on the type of subfloor. The cost would be more on the high side of that if any sister joints need to be added to support the new subflooring. The labor will usually run somewhere between $25 and $30 per hour, with a small repair taking anywhere from an hour to three hours to complete. Larger repairs would of course cost more.

Not all homes are built with the same sort of subflooring. Construction methods have changed with time, with some older methods having been set aside due to style, as well as newer construction materials taking over part of the market. Both the kind of material used and the material chosen for making the repair are factors to be considered for strength, appearance and cost.

Plank subflooring, was the standard method of home construction for years. I’m not referring to hardwood floors here, but rather pine floors. Plank flooring was used in homes where the expense of hardwood floors was not desired. But in the 1950s plywood took over from both hardwood and softwood subflooring.

When replacing plank subflooring, the final appearance desired is an important consideration. If the subfloor is going to be covered by carpeting, linoleum or laminates, then the appearance of the subfloor isn’t important. But in the case of hardwood floors, inserting plywood or OSB in place of new hardwood can destroy the look of the floor.

Plywood subflooring is the gold standard for modern home construction, offering strength, quality and fairly good moisture resistance. Nevertheless, unless pressure treated plywood is used (and that’s not common), it is subject to water damage, especially with a consistent leak. Plywood can be replaced with plywood or with oriented strand board (OSB).

OSB has taken over from plywood in much modern construction, especially where cost is a factor. Technically as strong as softwood plywood, the same thickness of OSB as plywood is permitted in the building code. However, OSB is not as water-resistant as plywood and is more likely to soak up moist, especially around the edges, leading to damage. OSB can be replaced with more OSB or with plywood.

A home which is built on a slab will have concrete subflooring on the ground floor. This is not subject to water damage, so the chances of needing to replace a concrete subfloor are minimal. Should it become damaged, chances are pretty good that the home itself has become severely damaged as well, needing much more than a simple subflooring repair.

To understand why it can be so expensive to replace a subfloor, it’s helpful to understand what’s involved in the process. Starting from the carpenter arriving on site, they are going to have to determine the extent of the damage. That means removing floor covering and sometimes the baseboard, as well as making or enlarging the existing hole, seeking out the extent of the damage. It is necessary to remove all of the rotten wood, as far back as it goes.

This often means removing more than just the rotted wood, as it is necessary to go back to the floor joist, cutting the subfloor to the middle of the joist, so that there is something to support the new subflooring that is being installed.

In some cases, the floor joists can be rotted as well. Even a small rotted area indicates the need to add a “sister joist” to the side of the existing one, providing additional support. This added piece of wood should be the same overall size as the original floor joist and extend three feet beyond the ends of the rotted area on the original joist. In cases where both sides of the joist are accessible, plywood can be attached to both sides to sister the joist.

Sistering may also be required if the top of the floor joist sits under the wall. In that case, the board attached to the side of the existing joist, to be used as the sister joist, does not have to be any particular size. What’s more important is that it be well-attached to the existing joist, so that it will transfer the load to that joist. It is best to screw these pieces on with deck screws, rather than nail them, so as to help ensure that they cannot work their way loose.

It is usually necessary to add additional blocks, between the joists and perpendicular to them, so that the new piece of subflooring will be supported all the way around. These need to be attached to both the existing subflooring, leaving half the board’s thickness available to attach the new subflooring, and to the joists. Use screw to “toe nail” these boards in place.

Finally, it is important to level the new subfloor with the existing. That may require shimming beneath the new subfloor when installing it or shaving the thickness down slightly to match the surrounding wood. The actual thickness of the existing subfloor may not match the material available in the lumberyard today, especially in the case of an older home. So it’s a good idea to check, before making the final installation.

This new piece of subflooring should fit snug around the edges, without leaving any gaps larger than 1/8”. Any larger gaps need to be filled, so as to not cause any problems for the floor covering that will be applied.

With the repair complete, the floor is ready for new floor covering.