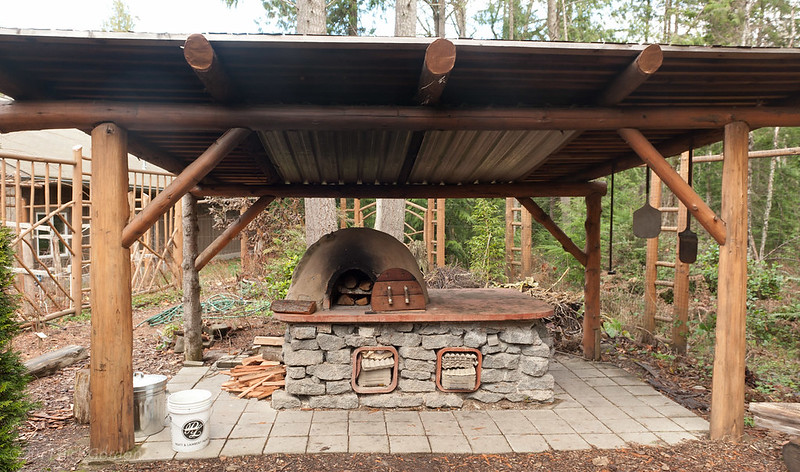 The basic cob oven has been around since the 13th century, but similar ovens, made of similar materials, have been used in other countries, much earlier than that. We find similar materials used in every continent on the Earth, and even similar styles of ovens. But cob itself is an English term, which was first used around the year 1600 CE.

Traditional cob is made of a mixture of a clay-based subsoil, mixed with sand straw and water. Sometimes lime is added to help bond it together, if lime is available. This makes it very similar to the material used by the Hebrews to build bricks for Pharaoh’s cities in Egypt. It also makes it extremely similar to adobe. The main difference between cob and adobe is that adobe is usually formed into bricks, while cob is molded in place. This allows cob to be made into more freeform structures, rather than just square or rectangular ones.

Today, most cob ovens are made of a combination of dry clay and sand, usually without any straw added. But if you were to build a house out of cob, you’d want to add the straw for additional strength. Like fiberglass, the strands of the straw would help hold the cob together, greatly increasing its tensile strength.

If you are going to build a cob oven from locally supplied clay, available on your property, it is necessary to dig up the clay and spread it out to dry, before using it. The clay will then need to be broken up, turning it into a powder, with granules roughly the same size as the sand you are going to use.

How a Cob Oven Works

A cob oven works by providing a large thermal mass to absorb heat and then radiate it back out later. A fire isn’t lit under the oven, but rather inside it, warming the cob itself. Once the oven is heated to the appropriate temperature, the fire is pushed to the side, and whatever is to be baked is placed on the now warm floor of the oven to cook.

Since thermal mass is the heater for the oven, it is important that there is sufficient thermal mass. A wall thickness of three inches or more is sufficient for this. The floor should be a similar thickness, but is usually made of fire brick, rather than making it out of cob. An insulating layer under the brick helps to keep the heat localized in the oven, where it will do the most good, rather than having the heat travel throughout the base, where it is more likely to radiate into the ambient air, rather than help in cooking food.

The cob oven requires no chimney, but instead has a rather tall door. This allows fresh air to be drawn in at the floor of the oven, where it is warmed and rises, exiting out the top of the door. This constant air movement provides a steady supply of oxygen to the fuel burning in the oven, keeping the fire from being extinguished. Since no chimney is required, the cob oven is relatively simple to build.

Start with the Base

Any cob oven is built on a base. But before starting on the base, you need to determine how big your oven is going to be. The height isn’t the issue; it’s the diameter that you need to be concerned about. You’ll want your oven to be a minimum of two-and-a-half times the diameter of any pizza you’re planning on cooking in it; more if you plan on cooking more than one pizza at a time.

Whatever base you’re going to build has to be able to accommodate this diameter, plus at least three inches all the way around for the walls of the oven. Some people build it even bigger than this, so as to have a place to set things before and after going into the oven.

You’ll need to level the ground, before building your base. This is most easily done by putting a layer of sand on the ground, packing it down, and then leveling it off. It doesn’t do much good to level it without packing, because the surface will change. But you may find that you have to add additional sand to raise up a low side or to fill a dip in the surface.

The base is generally built of some sort of stone material, whether that be natural stone found on the property, cement blocks, cement paving stones or brick. Often, the outside of the base is mortared together, while the inside is filled with loose rock. This is easier than mortaring the whole thing together and as long as the outside is well built, filling it with loose rock doesn’t hurt anything, this has been done for centuries, even in the construction of castle walls.

Total height of the base should be somewhere between 30 to 36 inches. But don’t fill it to that height. Rather, build the perimeter to that height and fill it to roughly six inches below that to leave space for an insulating layer.

Used wine bottles make an excellent insulating layer. But if you’re using stone for the filler, you’ll need to cover it with a thin layer of sand, so that there are no sharp edges to break the bottles. Then lay the bottles on the sand, sticking the necks of the bottles between each other, so that there is as much space covered as possible. Then add more sand, covering the bottles and creating a flat level surface to build the oven floor on.

While it is possible to make the oven floor out of cob too, you’re better off using fire brick, the same as you would use for the inside of a fireplace, if you were building a brick fireplace. This layer doesn’t need to be mortared, but the bricks should sit snug up against each other, level, with no gap.

It’s actually easy to level fire brick on a bed of sand. All you need to do is tap the high bricks with a rubber mallet. The mallet will cause enough vibration to gradually push sand out from under the high brick or cause it to compact. Use the rubber mallet at all seams and corners as well, to make sure they are even. A flat even floor is necessary, as otherwise it will affect the bottom of whatever pizza or bread you bake in the oven.

With the floor in place, scribe a circle on the brick to show where the walls of your oven are going to be. Since you want the oven to be a circle, use a sting compass to scribe it with chalk so that it will be visible.

The cob itself needs to be constructed over a mold, so that you can get the right shape for your oven. Since you will be working from the outside, if you don’t have a mold, you won’t be able to tell if you are keeping the walls even. So, build up a pile of packed wet sand, rounded like an upside-down bowl, to make the mold. Go for a high dome, with sides that go more or less straight up, rather than a low, flat one. There is no exact height to diameter ratio that you need to follow, but you want to make sure that you have enough height to be able to move things around inside the oven, even close to the edges.

Most people don’t bother making a mold for the door, but you can simplify the process by making a mold out of thin plywood over a heavier plywood structure. This way, you won’t have a problem cutting out the doorway, once the cob has dried.

Smooth the outer surface of your mold, and then cover it with a couple of layers of wet newspaper. This will act as a mold release, so that you can get the sand out of the oven when it is finished. If you don’t use the newspaper, you’re going to end up with sand sticking to the cob. This will fall off when using the oven, ending up in your pizza.

With the mold ready, it’s time to mix up the cob. You’re going to need a ratio of five parts clay to seven parts sand. Mix it thoroughly, dry, and then add water to it, making it into a consistency that can be molded into bricks.

Cob isn’t molded into bricks in the normal sense, using a mold. Rather, it is shaped by hand into something roughly the size of bricks. These aren’t exactly rectangular bricks though, as they need to be curved to match the circumference of the oven and slightly thicker on the outer edge, than on the inner. As you form them, be sure to remove all air pockets, packing the cob tightly together.

It’s not important that the bricks be the same size. In fact, you’re probably better off if they aren’t; just as long as you can pack them snugly together, not leaving any gaps in the walls and roof of the oven. Gaps can be filled with additional cob; just be sure to fill the gaps completely and not just fill the outside of them.

Once the dome has been completed, add additional cob to the surface to smooth it out and fill any gaps that weren’t filled previously. You’re trying to make one solid piece of material, to the point where you can’t tell where any of the seams are. Use a trowel to ensure a smooth surface.

Leave the cob oven two to four weeks to air dry, depending on how much humidity you have. Cover it, if it rains, to protect it and allow it to dry. While the cob is not easily damaged by light to medium rain, remember that this is unbaked clay at this point, so it can be damaged by a heavy rain.

The way the cob oven is used is to build a fire inside the center of the oven, using normal fire starting and building techniques. You need to allow this fire to burn down to the point where you have a good sized bed of coals, as the coals will be hotter. The floor and walls of the oven will absorb the heat from this fire, saving it for later use.

Once you have your coals and the oven has been sufficiently heated, push the coals to the sides, opening up the middle of the oven. Place whatever you are going to bake in the center, allowing it to be surrounded by the heat from the fire and the oven itself. Leave it there as long as necessary.

Some people make a door for their oven, either out of plywood or out of woven branches. This is not absolutely necessary, but it will help hold some of the heat in. But the tradeoff is that you won’t be able to see whatever you have baking in the oven, without removing the door.

Leftover coals can be allowed to burn out inside the oven. Then the ashes should be cleaned out, before the next time the oven is used.

Once the oven has been used a few times, the clay will have been baked and will be more weather resistant. Until then, you might want to keep the oven covered between uses.