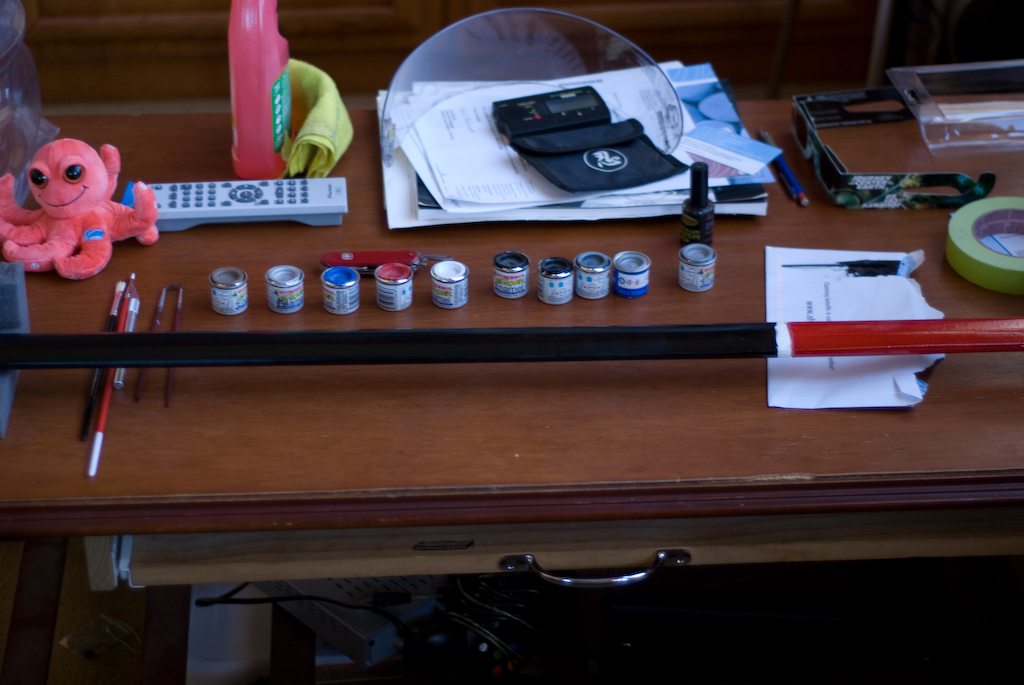 There’s a lot of fascination today with the katana and no wonder. Swords themselves are fascinating tools, hearkening back to a day when they were the ultimate weapon a soldier could own. In many cases, it was only the royalty and their knights who had swords to use, as making one would take a considerable amount of time from a skilled smith. Spears were the weapon of the infantry, as they were considerably easier and therefore less expensive to fabricate. Commoners used other things as weapons, often tools that they used every day.

The general fascination with the katana readily carries over into woodworking, as there is a wooden version of the katana known as the bokken, used for training in the movements of kendo, the Japanese art of sword fighting. This should not be confused with the shinai, which is a bamboo version of the katana, used in skirmish practice and competition. While the bokken is made of wood, it is fully capable of inflicting injury, either in bruising the person struck with it, cutting them if it is sharpened, or even breaking small bones.

This brings up an interesting possibility with a wooden katana, that of carrying one as a self-defense weapon. Carrying a katana falls under the same group of state laws regulating the carrying of knives. Due to its length, it’s illegal to carry in most states, although not illegal to own. But the bokken, being made of wood and not metal, is not legally considered a weapon; therefore, it is legal to carry. While I wouldn’t want to face off against a pistol-wielding hood with one, I’d take one over a switchblade any day. The police and district attorney’s office would likely categorize the use of the bokken just like the use of a baseball bat in self-defense.

There are actually many different types of Japanese swords, although the family of swords we know today is based upon the katana. There are three different swords in this category, all of which have the same basic design. The real difference between them is their length.

Traditional bokken are made from a wood called honoki, which only grows in Japan. Common replacement woods are basswood, poplar or alder, although any hardwood will work for making one. Woods with extremely straight and fine long grain are especially good, as they provide a stable blade. Other parts of the katana, such as the guard and the handle can be made of other, more decorative hardwoods.

In many ways, making the katana blade itself is similar to making a wooden play sword for a child. The main difference is taking more care with it, just as making a real katana takes more care than making a Roman Gladius. The difficult part in this project isn’t making the blade, it’s finishing out the sword.

The blade should be cut out from one single piece of hardwood. Some people make them out of plywood, but no plywood sword is going to match the quality of a hardwood one; the veneers will be visible and if there are any voids in the core ply’s, they will have to be filled, which won’t look good.

I would recommend starting by laying out the blade directly on the wood. Make some marks to locate the ends and the one inch of curve required to fulfill the design requirements of a katana, as well as the handle, which is roughly ¼ the overall length. This is actually formed by the tempering process in a steel katana, as the back of the blade shrinks faster than the edge; but we don’t have that advantage with our wood one. The edge can either be done freehand, with a string compass or with tape. Ruling tape, of the type used for laying out graphics for painting on cars, is excellent for this. There are two types; a flexible one for curves and one for straight lines. Use the kind for straight lines, as it will allow for the little bit of curvature needed for the katana blade. The blade should be about 1-1/4” to 1-1/12” wide, so make the tang slightly narrower, providing a ledge on either side.

Resaw a piece of 4/4 hardwood to create a board that’s roughly 3/8” thick. Run it through the planer, cutting off just enough to eliminate the blade marks, but don’t thin it out any more. Then cut out the blade on a band saw or with a jigsaw, cutting slightly oversize. Then move to the sander, smoothing out the cut and bringing it right up to the scribed or taped line.

The next step is to narrow out the blade towards the edge. There are several ways of doing this, but perhaps the best is to use a table saw, with the saw’s blade set to an angle. While the wooden katana’s blade is already curved, the table saw can still cut a consistent bevel, as long as the katana blank is pushed through the table saw’s blade with the point being cut always being the point of contact between the workpiece and the saw’s table. If it doesn’t come out perfect, don’t worry, as imperfections can be resolved in the next step.

The remainder of the shaping of the blade takes place with power sanders. Depending on the woodworker’s preference, either a belt sander or a disc sander can be used for shaping, with a random-orbital sander used for smoothing the surface once it is properly shaped.

It’s up to the woodworker whether or not to thin out the blade tang slightly. This isn’t actually needed, as the hilt will be able to catch on the corner created by making the tang narrower in the other direction. Since a handle needs to be attached, the tang doesn’t need to be thinned out for grip.

Finishing Out the Katana

While the blade is the most important part of a katana, it still needs other parts to make it complete. Basically, these consist of a hilt or guard (tsuba), the handle (tsuka), spacers on either side of the hilt (seppa) and a pommel cap (kashira). To keep with the nature of this project, these will all be made out of wood. For aesthetic purposes, it’s a good idea to use different kinds of wood with contrasting colors for the adjoining pieces, making them stand out from each other.

The hilt of a katana can either be round or square with rounded corner. It should be about ½” thick and usually made of a contrasting wood on a wooden katana. Many are carved or have designs cut in relief on a scroll saw. The one real design requirement though is that a cutout that exactly fits over the tang of the katana, all the way up to the shoulder at the end of the cutting portion of the blade be made in the center of the hilt.

Two spacers need to be made to go on either side of the hilt, with the same hole in the center. These should be about ¼” thick, with the outside of the spacers equaling the outer shape of the handle.

To make the handle itself, start out with a piece of wood resawn to ½” thick. That provides a handle that’s 1” thick. The height of the handle should be about ¼” more than the width of the blade and its overall length about ½” longer than the tang. Before cutting out the handle pieces, it’s a good idea to hollow out the inset space for the sword’s tang, making it a tight fit.

There are two different ways of making the handle on a wooden katana, specifically in dealing with the diamond pattern that is common for the handle of katanas. One is to insert diamond shaped pieces into the material of the handle. While this is possible, the people who I’ve seen do this have used CNC tools to cut out the diamond inlays, as well as the hole in the handle where the inlays are to be installed. As I don’t have access to such equipment, I’ve decided that it would actually be easier to use the traditional “Ito” wrap that is used on real katanas.

With the groove for the handle routed out of the handle material, cut out the handle halves and check them for fit. It might also be a good idea to round the edges on a router table, to minimize the amount of sanding needed when they are attached to the sword.

Finally, cut a block of wood for the pommel cap, making it slightly oversized. Aesthetically it will look good if it is made from the same material as the spacers, giving it a contrast with the handle. As with the handle pieces, round over the edges which will become the outer corner of the handle on a router table, but be sure not to round over the ends, as they will come into contact with the hilt spacers and the pommel cap. This needs a hole drilled in the middle of one side, so that a dowel pin can be glued in.

It’s time to glue everything together, using ample glue on all the mating surfaces. Start with one spacer, then add the hilt and then the other spacer. clamp this all together, on the shank of the sword and allow the glue to dry. Then glue on the two sides of the handle, clamping them together and up tight against the second hilt spacer. Finally, drill a hole in the end of the handle for the dowel pin that will hold the pommel cap on and glue on the pommel cap, aligning it with the handle and clamping it to the hilt to draw it in tight.

Once the glue is dry, remove all the clamps and check the handle. There will likely be glue that has oozed out in various places and the parts may not fit perfectly together. Final sanding of the handle, spacer and pommel cap will be needed, so that their exterior surfaces are aligned perfectly and smooth. Some additional sanding may be needed for the hilt and other spacers.

Apply whatever finish is desired to the wooden katana.

It might seem intimidating to wrap a katana handle for the first time, but the actual process is fairly simple. The wrap used for this is called “Ito” and is traditionally made of silk; but today it is most often made out of cotton or sometimes leather. It is readily available online.

The trick to the wrap, which creates the diamond pattern, happens at this point. Take one of the two ends of the Ito and twist it 360 degrees. Then lay it against the handle of the katana and hold it there. Then do the same with the other end, overlapping the twist over the first. The ends are then wrapped around the handle to the other side, where the process is repeated. Keep wrapping in this manner, down the full length of the handle, until the pommel cap is reached. On each twist, alternate which of the ends is twisted first. Keep the Ito as tight as possible throughout this process, with each wrap snug up against the previous one.

Once the pommel cap is reached, it is time to tie off the Ito. This essentially consists of sticking the ends of the Ito under the wrap in a particular manner. It is best to see a video of how this is done, rather than try to understand it from me explaining it.