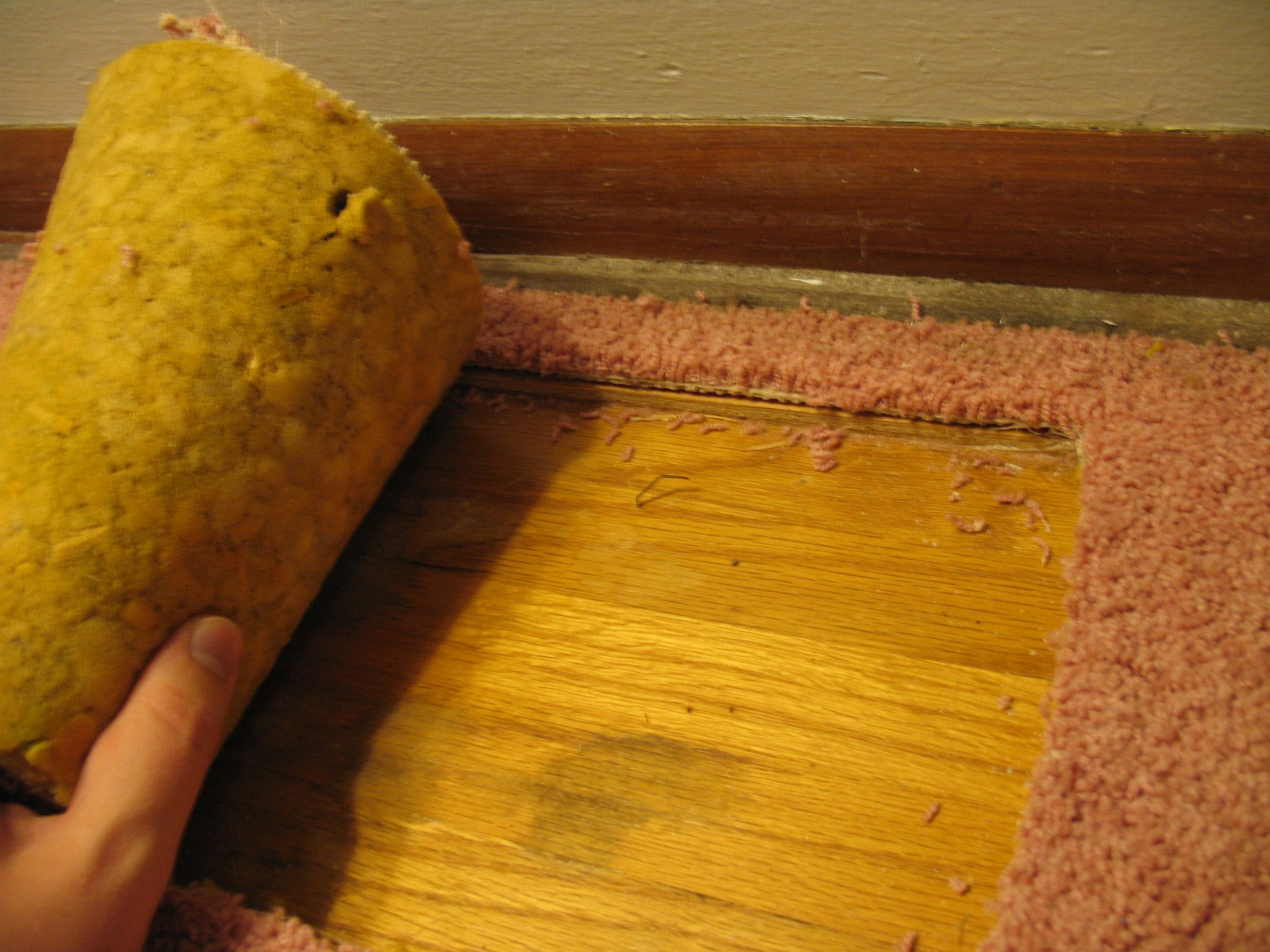 Back a half century ago, the predominant flooring style for homes changed to carpeting. While carpeting has existed much longer than that, it was something reserved for the wealthy. Lowering costs, tied together with higher wages, led to more and more middle class Americans installing carpeting in their homes. Many times, they covered up beautiful hardwood floors with them.

For the last half of the last century, carpeting was the predominant floor covering used in new homes. But times have changed and people are moving away from carpeting. Nevertheless, there are still plenty of homes where carpeting is installed in at least part of the home.

During the height of the carpeting trend, people were covering up beautiful hardwood flooring, which was considered passé, with carpeting. Now people are removing that carpeting and going back to the beauty of those hardwood floors. But it’s not always as easy as one might think it is.

Removing carpeting is easy; someone who knows what they’re doing can strip it from an entire house in a matter of hours. But there will usually be lots of stapes and maybe a bit of adhesive left after that. Those were used to hold the padding in place and must be removed, no matter what sort of floor covering is going to be reinstalled in the home.

Carpet layers will usually just pound those staples down, before they install the new pad. But if the home has hardwood floors in it, that’s not a good idea. Leaving those staples in place can cause problems down the road, if it is ever decided to refinish the hardwood floors.

While it won’t be as big an issue if new carpeting is being put down, especially with plywood subfloors, those staples have to come out for any other type of flooring. Staples left behind or even the stubs of staples left behind will cause bumps in the new floor covering and might even poke through, damaging the new flooring and creating a hazard.

What Not to Do

Most people try to remove staples from the floor with either a straight-blade screwdriver or a pair of pliers. I’ve even seen a few try to use a pry bar; but that doesn’t work; nor does the screwdriver either. Pliers can work, but that’s an extremely slow way to remove the staples.

Pliers may need to be used for some of the harder staples, especially if the staple breaks off and there’s only one leg stuck into the wood. In that case, grasp the staple as near the floor as possible with slip-joint pliers and roll the pliers over the curve, pulling the staple out. The same can be done with small water pump pliers.

The Best Staple Remover for Softwoods

To remove those staples from plywood or pine board floors, the best tool is a long-handled scraper with an 8” razor blade. Not only will this remove the staples easily, with the sharp blade catching in the metal of the staples, forcing them to come out, but it will so while being easy on the back. Compared to the other methods I’m going to mention, it’s the only one that can be done standing up, rather than hunched over for hours while working on the floor.

There may be a few staples that don’t come up readily with this tool, especially if they are bunched together. In that case, switching over to a smaller version of the same tool, with a 4” blade can help. While it won’t provide as much leverage as the larger tool, it will provide better control.

Finally, for staples that can’t be reached with the 4” scraper, the ideal tool to use is a pair of diagonal cutters. They provide the same sort of grip into the metal of the staple that the razor blade will. Just don’t close down on them to the point of cutting off the staple, or it might have to be pounded in.

The Best Staple Remover for Hardwoods

Removing staples from hardwood floors is considerably harder than removing it from softwood ones. With hardwood floors, such as oak, most of the staples will have to be removed with the smaller scraper or the diagonal cutters. Personna manufactures a 4” scrape that has a bulbous end to the handle. This makes it much easier to apply pressure to the scraper, right at the back, without getting sore hands. Unless there are only a few staples to be removed, it will be worth the cost.

If the staple can’t be removed with the scraper, then it will be necessary to use a specialized lever action staple remover. There are a number of these on the market. Of them, the best are the kinds where the pressure of pushing down on the lever puts pressure on the staple, gripping it, as well as pulling it up. That will most likely pull out the entire staple, rather than just one side of it.

If new carpeting is going down, the tack strips can probably be reused. There’s not a whole lot that can go wrong with them. Before reusing them though, check that they are firmly nailed to the floor, that the upward facing tacks are still in place and that there aren’t any parts that came up with the carpeting.

On the other hand, if the wood floors are going to be refinished or another type of floor covering is going down, those tack strips cannot stay in place. In that case, it will be necessary to remove them, while causing as little damage to the surface of the wood floor as possible.

Start by removing the tack strips by pulling up on the tacks, using a long-handled pair of electrical pliers with a nose that meets together well. The tacks can be gripped with these and pulled up on, which will cause the strip to come up, possibly breaking in the process. The nails that held the tack strip down may or may not come up with the strip, as the strip will probably break.