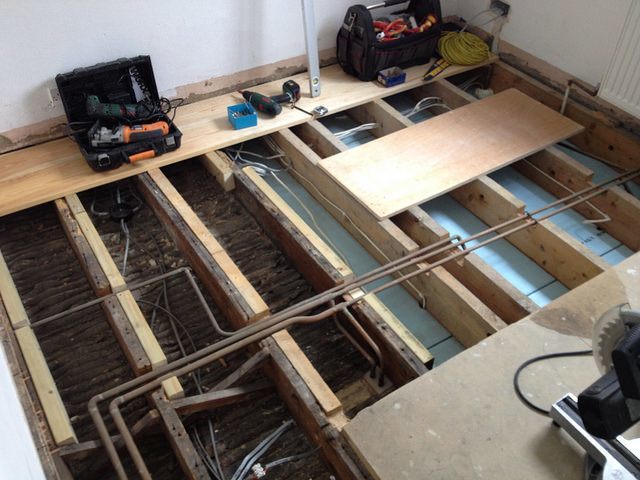 Unless your home is built on a concrete slab, where the slab is the subfloor for the first floor, the floor itself rests on floor joists. These are usually 2”x 8”, 2”x 10”, or 2”x 12” dimensional lumber, depending on the span between supports and the spacing between the joists themselves. This is mandated by building code and has been in place for years.

In more recent times, engineered wood joists, which are essentially a thin I-Beam, have replaced dimensional lumber in many newer homes. These joists consist of a 2”x 2” square piece of lumber at the top and bottom, with a “web” of plywood or OSB between them. This allows the building of the home with less lumber, conserving resources and lowering costs. Being made from engineered wood products, an I-Joist is less likely to cup, twist, bow or warp. This eliminates many floor squeaks that you will find in older homes.

Those squeaks generally indicate a problem with the floor joists, although in really old homes it can happen because of shrinkage of the plank flooring and nails pulling out. These older homes were not built with modern flooring nails, which have a twist in them, to keep them from pulling up with time and flexing of the floor.

Floor joists can twist or warp slightly with age, especially if they are installed in an area where they are exposed to a lot of moisture. The plywood subfloor tends to hold them in place, but the twisting or warping will pull on the nails, either pulling them through the subflooring or pulling them out of the floor joist. Which of those depends on what else is happening to the joist. If the joist is beginning to rot, due to moisture, then the nail is more likely to be pulling loose in the joist.

Besides creating squeaky floors, joists which have become somewhat rotted become weaker, allowing more flexing of the floor and joist. When you feel sponginess in a floor, you should not assume that it’s just loose floorboards or subflooring; but also a potential problem with your floor joists, which needs to be investigated. Should there be any damage to the joists, they should be reinforced.

While you may already know that a good plywood subfloor adds support to your home, you may not be aware that reinforcing joists with plywood can add structural integrity. If you notice that one or more joists are squeaking, or if you’re starting to feel some bounce when walking, it’s time to get to work.

How to Reinforce Joists with Plywood

In the event a joist is cracking or sagging, it needs to be repaired quickly. The longer you leave it, the worse it will get. Not only that, but sagging floors can have other effects, such as causing the walls to sag, resulting in cracked drywall.

Some people reinforce floor joists by scabbing on another piece of the same sized dimensional lumber as was originally used, essentially making a double joist. While this is functional, it is also an expensive means of strengthening the joist, using more material than is necessary. It is never advised to use a smaller piece of dimensional lumber, such as scabbing a 2”x 6” onto the side of a 2”x 8” floor joist, as the new piece won’t be as strong as the old one.

Plywood is a strong laminate composed of several thin layers of heavily wood, glued together under compression. Some people consider it to be inferior to standard lumber, but the opposite is almost always true! A quality piece of plywood is typically stronger than the corresponding amount of standard wood.

Reinforcing Joists When You Can’t Get Underneath

Some crawlspaces are not DIY friendly; not providing enough room to work. In these cases, you can still reinforce joists and eliminate weak or squeaky areas by accessing the joists from above. However, this is going to be a much bigger job and is best left for doing when you are going to replace the flooring anyway.

Doing this requires removing the surface flooring. In some cases, such as carpeting, the flooring can be saved and reused; but with other types of flooring, you may as well plan on doing a remodel, as there is no way of removing the flooring, without damaging it. In either case, once the flooring is up, you’ll be able to see the subfloor.

While these tasks can be labor-intensive and time consuming, reinforcing joists with plywood protects your investment in your home. Doing it yourself will save money – even if you purchase the best plywood, screws, and construction adhesive available.