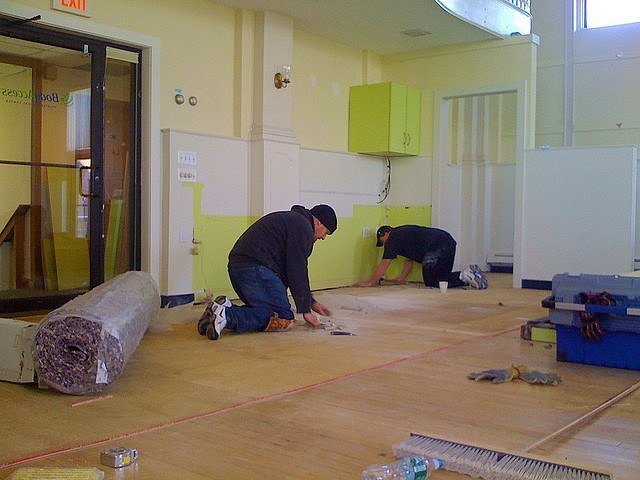 Plywood floor is sometimes known to squeak and we all find this very annoying, especially if this happens in rooms where people rest and study. A squeaky plywood floor can be very disconcerting and can sometimes even be extremely embarrassing for you. On a more serious note, the squeakiness of the flooring is an indication of a mechanical issue. Such issues might lead to cracking and degradation of the plywood in the long run. Thus, it is important not to take a squeaking floor lightly and get to fixing it as soon as possible. The question you are surely going to ask would be how to fix a squeaky floor.

How are Squeaks Caused in Plywood Floor

Before you get to the task of fixing the squeaky plywood floor, it is essential that you know the cause for the squeaks first. A squeak is usually produced when movement between the seams of the wood between subflooring sheets occurs causing a frictional noise. This movement is most likely caused because of ill-fitting floorboards. Thus, when you step on these loose floorboards, they rub against each other producing the squeaky sound. A squeak can also be caused because of the loosening of the nails holding the plywood.

Squeaky plywood floors can be fixed in a number of ways but the trick is to know the root cause of the squeak first. Only after knowing this would you be able to fix the noise once and for all without any failures. The following are some of the methods that can be employed for fixing squeaky plywood.

If the friction between the loose floorboards is the reason behind the noisy floor then the easiest way of fixing it is to put some lubricant like powdered graphite in between plies to prevent them from rubbing against each other. However, it is just a temporary fix and might not stop the squeaking noise entirely. Using the Saw Kerf method on the other hand can resolve the issue with plywood permanently. In this method, you will have to open up the joint a bit using a circular saw so that the floorboards no longer rub against each other. Make sure to only create a saw kerf (blade thickness of space) between the floorboards and no more. An important thing to remember with this method is that it can only be used if the squeaky noise is being created by seams present in between the beams and not the edges present directly over the beam.

Screwing the Nails In

If the squeak of the plywood is being caused because of a loosened nail then the right course of action would be to bang the nail in again. As soon as the nail is back in place again, the squeaking noise is going to stop immediately. However, in most cases, this would prove to be a temporary fix at best and the nail would not remain in its place for long and the squeaky noise will return. In order to fix the problem permanently, screwing the nails into the floorboard is a much better option. Screws are capable of maintain their position much better than the nails and can offer greater support. One thing to remember when screwing the nails in is to press down on the squeaky area while doing it.