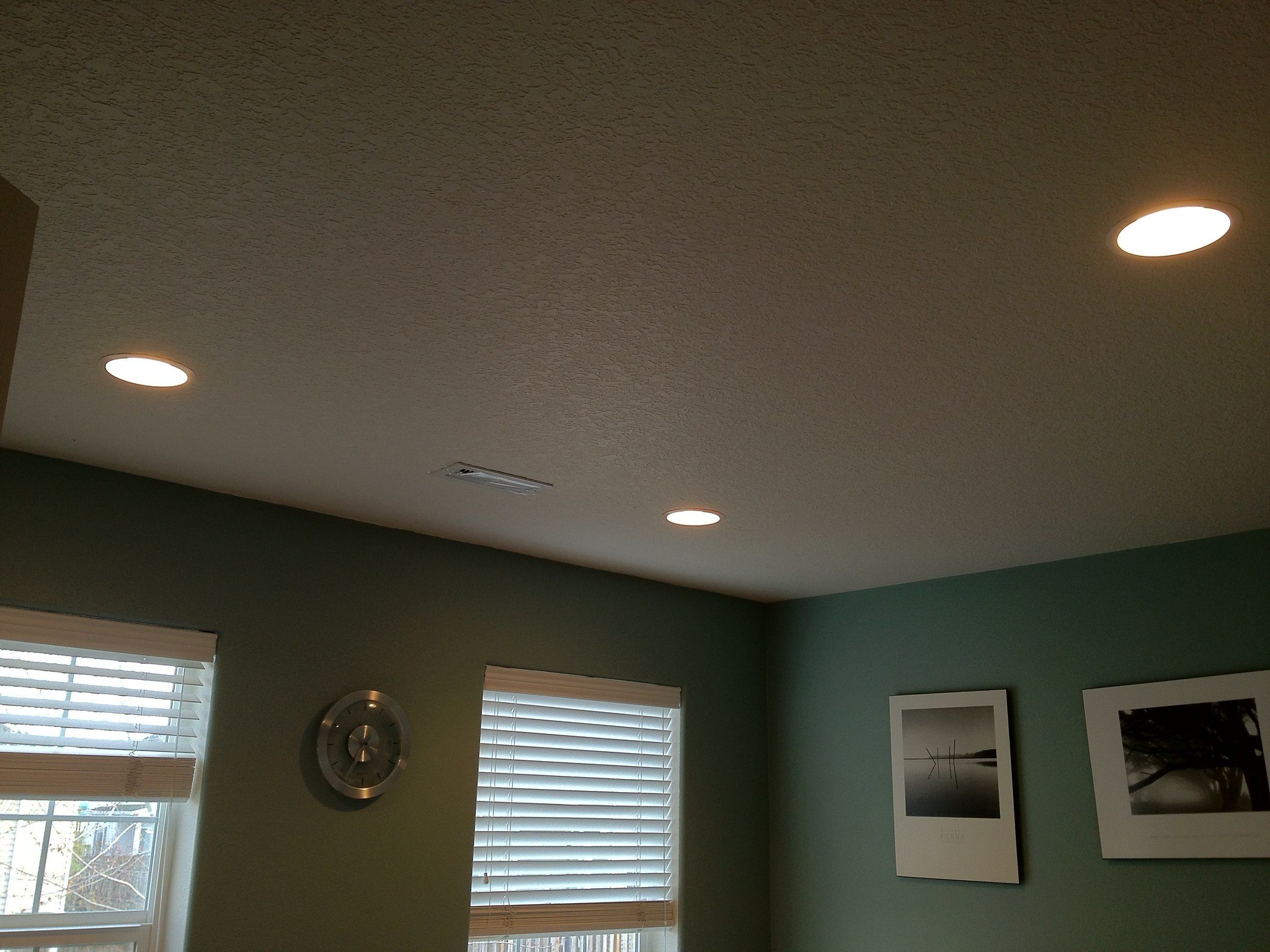 Recessed lighting, otherwise known as “can lighting” is popular for adding light to a room, providing highlights to make something stand out or providing mood lighting. It is an excellent way of providing light to individual areas of a room, especially a large one or to make a smaller room look bigger. Compared to other ceiling light fixtures, it tends to provide a cleaner, more modern look.

One of the nice things about recessed lighting is that it is relatively inexpensive to install, especially when compared to surface mounted lights. Even though more recessed lights are usually required for a room, the overall cost of the project will be lower.

However, not all recessed lights are created equal. While the most common size is 6”, they come from 4” all the way up to 9”. The larger ones have a wider reflector, so will provide lighting to a larger area, while the smaller ones are excellent for providing spot lighting for drawing attention to artwork or other items. In addition, there are now LED recessed lights, which have the LED built right into the fixture, saving energy costs, while providing long life.

Installing this lighting on new construction is easy, as the wires can be run and the lighting installed before the drywall is. But what about once the home is built? Can recessed lighting be installed in a finished home? Can it be installed in a home where there isn’t any attic access?

The big problem with not having attic access isn’t actually the lights themselves. There are lights manufactured for retrofit, which can be mounted into pre-existing drywall ceilings. But that doesn’t help with the wiring, which is the big challenge. Nevertheless, it is possible to install them either way, if one is willing to make a few holes in the existing drywall and repair them later.

Before starting any recessed lighting remodel, it’s important to plan it out. Light placement is important, but so is planning out how the wiring will be run. Wiring often needs to be run through the ceiling joists, making it necessary to cut holes in the ceiling drywall. Holes may also need to be made in the wall, in order to install a light switch.

Starting with the location of the cans, it is necessary to first determine where the ceiling joists are. Ceiling joists will generally run across the narrower dimension of the home, going from the outer wall to a support wall in the middle of the house. They will either be installed on 16” centers or 24” centers, so once you find one; it should be easy to determine where the rest are.

Obviously the cans can’t be mounted right where the joists are; they must be mounted in-between them. When measuring, always leave an extra inch or two between the hole and the joist, so that it will clear fine. Additionally, the lights should be mounted at least three feet from the wall, to prevent them from creating shadows on the wall.

But just how far apart should the lights be?

Recessed lighting is normally installed every four to six feet. The rule of thumb is to measure the ceiling height and divide it in half. That distance is the ideal distance between 6” recessed ceiling lights. Larger lights will spread their light farther, so can be spaced farther apart.

Keep the spacing of the lights symmetrical, other than those which are being used to specifically highlight a specific item or area. Four lights, spaced four feet apart from each other and four feet from the wall, in a square, will usually provide adequate lighting for a 12’ x 12’ room, unless higher levels of illumination are needed, such as in a kitchen.

Before making any hole in the ceiling, layout the lighting plan and make sure that it won’t interfere with the ceiling joists.

Power for the lights is going to have to come from a light switch somewhere. If there is already a light switch in place, perhaps providing power to a centrally mounted light fixture that is to be replaced, that’s ideal. But if not, a light switch will have to be installed.

This means removing the existing light switch box and replacing it with a larger one. The existing one will be nailed to a stud, so to remove it, it will be necessary to cut the nails that are holding it in place, with either a sawzall or a vibratory cutter. But before doing that, turn off the breaker for the room and disconnect the existing light switch, being careful not to make the wires any shorter.

With the switch box removed, the opening can be cut out to fit a larger “remodeling” switch box. Take care when buying this to ensure that it is one intended for remodeling. The difference is that there are no nails to attach it to the stud and there are small gripper arms which can be tightened up on the back side of the drywall, to hold the box in place.

If there is no existing light switch (highly unlikely), then power can be pulled from an existing electric outlet. Simply cut a hole for the box above the outlet box, 48” above the floor. Then use an electrical snake to fish a piece of romex between the two boxes, connecting it to the outlet at one end and the light switch at the other.

It will probably be necessary to cut several hole in the drywall, in order to install the wiring. The first place this will need to be done is in the wall, above the light switch. That hole should be about 2-3/4” below the ceiling and be long enough vertically to allow a long drill bit to reach inside the wall and drill through the ceiling plate in the wall. A matching hole will need to be made in the ceiling, just above that, so that the wire snaked through the hole can be captured and sent to the lights.

In addition, the hole for the cans themselves will need to be cut. They should come with a pattern for cutting, so that the holes are the right size. Use a keyhole saw or drywall saw to cut out the opening, taking care to follow the pattern closely. If the hole is made too large, the clips won’t be able to hold the light can in place properly.

Once the wire is above the ceiling, there are a couple of options to consider. First, you won’t want to have to drill through more ceiling joists than absolutely necessary. If there isn’t another floor above the joists, this drilling can be avoided by snaking the romex over the joists. But if there is a floor above the joists (the most likely reason why there wouldn’t be access to the space above the ceiling) then it will be best to run the wire parallel with the joists as much as possible, reducing the number of hole that need to be drilled through the joists.

Each hole drilled will require another hole in the drywall, providing access for the drill bit to get to the joist. Other than the holes for the lights, those should be the only holes made. Use an electrician’s snake to reach from one access point to the next, pulling the wire through. That way, there won’t be as many holes in the ceiling that need to be filled.

When running the wire (romex), always cut it long, leaving extra. It’s not a big deal to cut off the excess; but it’s a big deal to have to rerun a wire, because it is too short. Remember that each light will probably have two wires connected to it; one bringing power to the light and a second one taking power from that light and carrying it to the next light. The exception will be the last light in the string, which will only have one wire connected to it.

The can will have an electrical box attached to it via a short arm. Pop out one or two of the hole covers with a straight-bladed screwdriver, as needed (one per wire) and install strain reliefs in the holes. Run the wires already installed in the ceiling into the boxes, through these strain reliefs and attach them to the can’s wiring. Quick fasteners will usually be provided for this, but if they are not, wire nuts can be used. Once the wires are attached, the cover can be reinstalled on the connection box.

The can will probably have three clips for attaching it in place. Locate them and check that they are pressed into the can, not the area around it. Then slip the can up into the hole in the drywall, electric box first. It may be necessary to jiggle the can somewhat to get it in all the way, especially if the wiring ends up above the can.

With the can in place, the clips will need to be pushed outwards, so that they make contact with the back side of the drywall ceiling. Contact should be snug enough that the can cannot be turned.

Add the bezel ring to the light to finish out the installation.

The process to install these lights, under these conditions, will probably leave a number of holes in the wall and especially the ceiling of the room. These will need to be patched, using standard drywall patching techniques. Once the patches are finished and the drywall mud has had time to dry, add texture and paint to match the rest of the room.