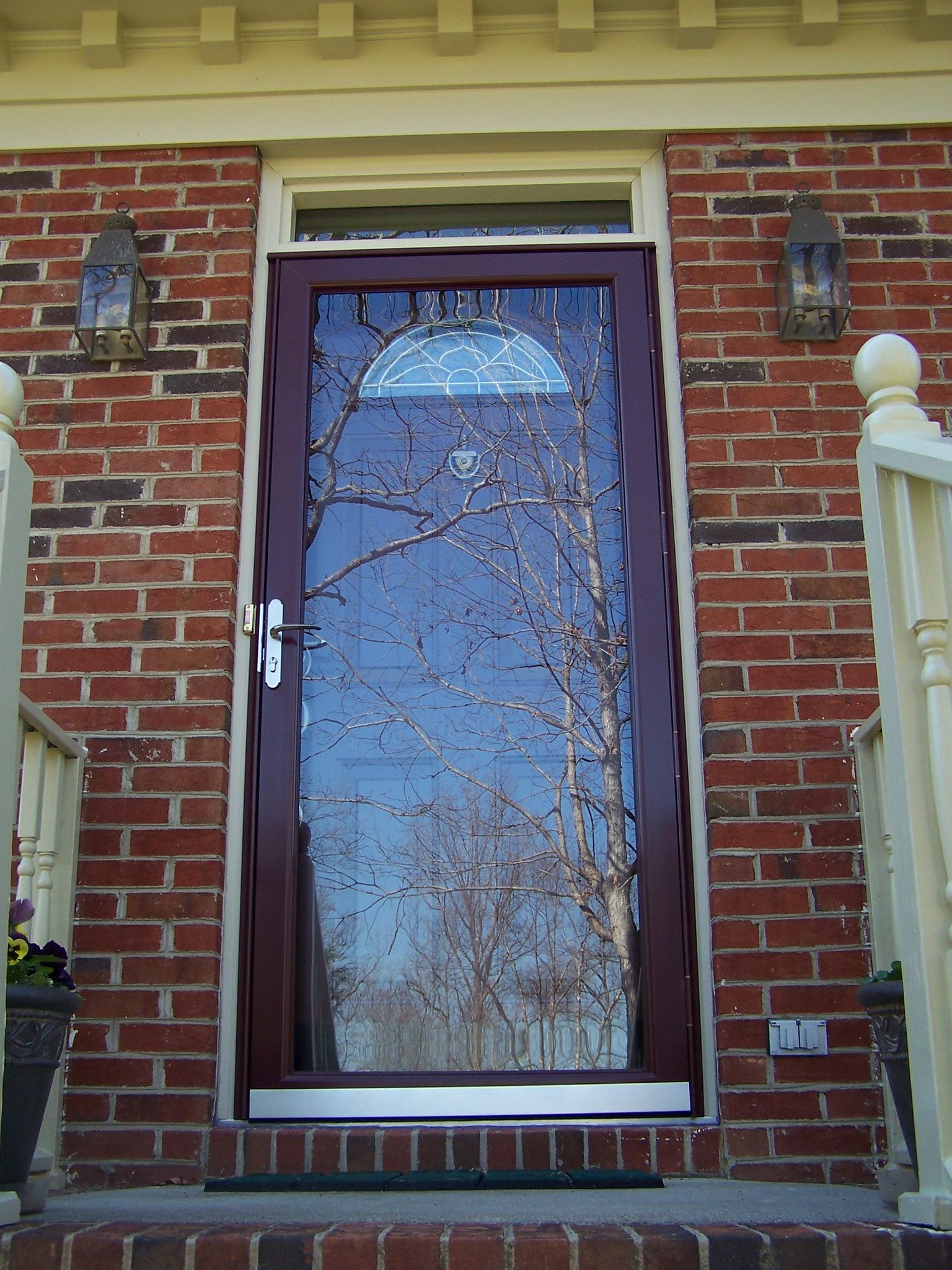 Storm doors seem to have lost popularity over the last few decades. It may be nothing more than contractors not including this feature on homes, as sort of a cost-cutting measure. There are other things we’ve noticed them leaving off as well, giving a lot of credence to that as a possibility.

This may not have been a good idea on the part of those contractors though, as storm doors serve a very real purpose. Without them, our home’s entry doors are subject to the full force of the weather, without any protection. While they can withstand that to some extent, it will cause greater wear to the doors, requiring more frequent painting and maintenance. In addition, storm doors add to the insulating value of the existing entry doors, along with providing a better air seal than entry doors typically do.

Fortunately, one doesn’t have to spend a lot of money to add a wood storm door with a glass pane in it to most homes. While there are some such doors which are rather expensive, there are plenty of doors in the $100 to $400 range which work just fine.

Storm doors are predominantly intended to be used over wood doors, rather than steel or aluminum ones. The main difference is that aluminum and steel doors are usually filled with urethane foam insulation, increasing their R-value over that of a wood door. Nevertheless, it is still possible to use a storm door over a metal one.

Advantages of a Wood Storm Door

These wood storm doors with glass windows in them provide a number of benefits to the home. How much of each of these benefits the door provides depends on a combination of the type of door installed and the entry door it is installed over. An entry door with a large light (glass) will naturally allow a lot of light in, so opening that door to allow the sunlight to come in through the wood entry door’s glass won’t be as beneficial, as it would for an entry door where there is only a small light.

Today’s storm doors often come with double-pane glass in them, increasing their insulating value even more. Double-pane glass is becoming the standard of the construction industry, mostly because of the difference it can make in the cost of heating and cooling a home.

Some wood entry doors are designed so that the door glass can be removed and replaced with a screen for the warmer months. This allows the doorway to be used for vent of the home, without having to leave the door open and allowing flying insects to come in. Another option that is sometimes found is a split window, allowing the upper part of the window to be dropped down in a track, leaving a screened opening exposed for air to flow through. This is often called a “self-storing” door, as it stores the glass pane within the door, rather than having to remove it and store it elsewhere.

Adding a second door over the first also helps to increase your home’s security, by adding one more layer of defense that a thief would have to overcome in order to gain access to your home. While the door itself is not normally as sturdy as the entry door and the lock is not as robust, the mere fact that it is in place provides an additional problem for the would-be thief to overcome. That might be enough to cause them to decide that it’s a good idea to look elsewhere.

Storm doors come in both aluminum and wood versions, with aluminum ones actually being more common. The popularity of aluminum is due to a combination of lower cost and greater strength. However, wood storm doors are much more attractive and the high-end storm doors will almost always be wood.

Storm doors can come in either single-pane or multi-pane versions, with a six-pane door being the most common version of a multi-pane storm door. Not all storm doors have the glass extending the full height of the door though. Just as entry doors might have a smaller light in them, storm doors may only have the upper part of the door in glass, with the lower part either a single solid panel or two raised panels.

These doors with a solid bottom provide another benefit to be considered, for those who would want them; that is that they can have a pet door installed in them, allowing pets to go in and out the door on their own.

While some people might consider a storm door to be nothing more than a fancy screen door, the two are really quite different. The most obvious difference is that storm doors always have glass in them, even if that glass is removable to expose a window screen. They are also considerably stronger than screen doors. Whereas a screen door is unlikely to do anything to add to a home’s security, the thicker storm door provides that additional layer of barrier for the thief to have to deal with.

Installing a storm door on a home is extremely easy. The starting point is taking measurements, before buying the door, so that the right sized door can be purchased. Since entry doors are pretty much standard today, there should be standard storm doors which will fit the available opening. Measuring is just a way of making sure that there won’t be any fit problems once it’s time to do the installation. If the glass or screen are removable, take them out before mounting the door, to avoid any chance of breaking.

Typically, storm doors are made so that they can be installed left-opening or right-opening, as the owner prefers. In most cases, this will be done so that the door’s hinges are on the same side as the entry door; but there are cases where that is impractical. Obstructions, such as railings and the walls of the home must be taken into consideration. Having the storm door open against the wall is much better, when the door opening is near a corner. Opening it the other way gives the appearance of the door opening being smaller. While it is not, it could be more difficult to move large items, like pieces of furniture, through the door.

Having the doors open opposite, with the storm door opening to one side and the entry door opening to the other, can cause its own problems; once again, especially when moving furniture through the door. Take the time to think it through, before installing the door, so that it will not have to be removed and re-hung.

Most storm doors will come with a frame, making them easy to install. If an existing screen door or storm door is already installed, it will need to come out before the new one can go in. If not, the first step is to check that the outer face of the door frame is flush and even. In some cases, such as doors which have side lights, the dividing frame between the door and the side light may not come out as far as the rest of the door frame. In that case, a flat piece of trim will need to be cut and installed over the existing frame, bringing it out flush with the rest. Be sure to paint this new section of the frame, before installing the door.

Storm door manufacturers generally make their doors slightly narrower than the entry door, to ensure that they will fit. This means that the door frame will need to be “furred out” to fit. Depending on the actual size of the storm door frame and the existing door frame, this may need to be only on the hinge side or on both the hinge and latch side.

Measure the door frame at top, middle and bottom to ensure that it is consistent. The manufacturer’s instructions will provide a minimum door frame width for the door to be installed into. Subtract this measurement from the measurement taken of the door frame to determine how thick a strip is needed to make the storm door’s frame fit exactly. If that is more than ¼”, divide the difference in two and only put half that thickness on the hinge side. Hold off on furring out the latch side at this time.

Mount the storm door’s frame tight up against the furring strip on the hinge side. Use a pry bar on the opposite side of the door, up against the frame, to ensure that it is snug. Then swing the door shut and check the latch side. Only install a strip there, if necessary.

The door frame may need some trimming, especially if it is an aluminum frame. The Z-bar systems used for storm door frames can be difficult to cut. While they can be cut with tin snips, it is often best to use a miter saw, with a fine-toothed blade. It will be necessary to ensure that the corner fit snugly together.

One important part of installing any storm door is ensuring that it seals properly. The kit should come with a door sweep and seals all the way around. However, if the door looks like it is warped once it is installed and the door closers are properly adjusted, the door will not seal properly. In actuality, it won’t be the storm door that is warped in that case; it will usually be the door frame. It may be necessary to adjust the position of the storm door’s frame slightly, shimming it and bringing it forward in spots, in order to allow the door to seat inside the frame properly.

The one big difference between installing storm doors on a typical entry door and installing them over French doors is the frame. The same doors can be used in both cases, although French doors will require two storm doors. In addition, an astragal kit, sometimes referred to as a French door kit, will be needed.

The purpose of this kit is to allow the two doors to seal against each other. It is mounted to the edge of the fixed door (the one that won’t be opening all the time) essentially providing a frame edge for the functioning door to seal against and allowing the door to latch to. Because this is used, there will be leftover pieces from the both door frames.