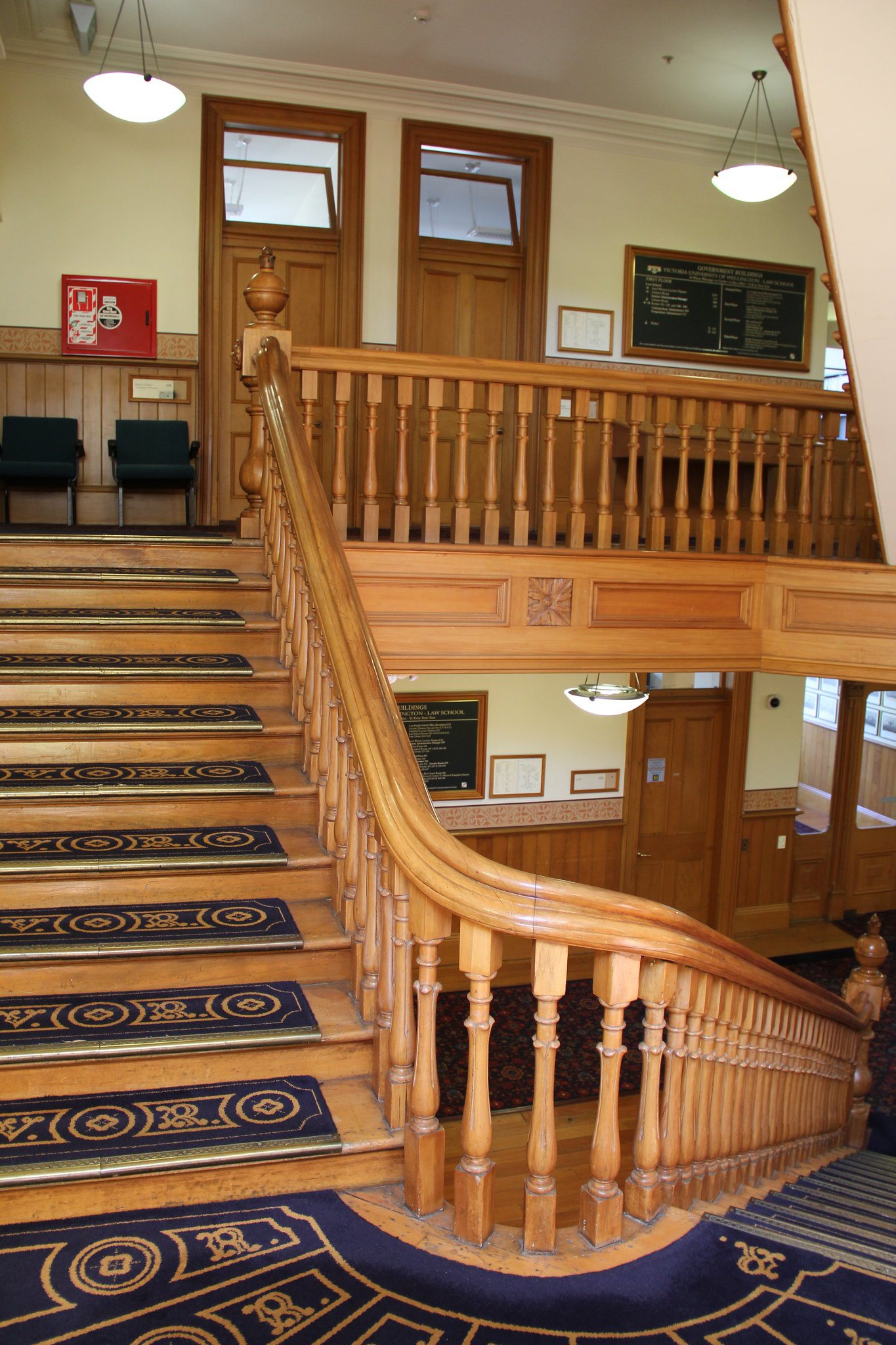 Any staircase with more than two risers (the vertical part of the step) is required to have a handrail, according to building code. Handrails are a safety concern, providing people of all ages something to hold onto, while negotiating their way up and down the stairs. This is especially important for the elderly, small children, and women in heels.

Building code doesn’t make any stipulation as to which side of the stairwell the handrail is mounted on though. In the case of an open stairwell, safety dictates putting the handrail on the outside, so that it can prevent people from falling off the stairs, in the case of a trip. But no standard or regulation exists for which side to put them on in a closed stairwell. Yet most people seem to put them on the right side, going up the stairs.

Building code requirements are different for handrails installed in homes and those installed in commercial buildings. For homes, a handrail is only required on one side, although some people put them on both sides, especially when one side of the staircase is open. Commercial buildings, on the other hand, are required to have handrails on both sides.

Home handrail installations are almost always made of wood moldings, specially cut for handrails. There are really only a few styles of these available. However, homeowners are able to create a variety of different looks by how they choose to paint and/or stain the handrails balusters.

The building code includes fairly extensive requirements for how handrails are installed, although it does not say much about the fabrication of the handrail itself. In addition to the wood handrails mentioned above, metal handrails can be used. This is common for commercial buildings, but other than southwestern architecture, is unlikely to be found in homes.

The overall length of the handrail is the first item of concern. Handrails must cover the full range of the stairwell. That means from the nose of the bottom step to the nose at the staircase on the floor above. The handrail itself must be mounted between 32 and 34 inches above the stair treads, measured at the nose of the step tread. Commercial buildings have a wider acceptable range, as established by OSHA.

One other dimension is of importance. That is, the handrail must be mounted far enough away from the wall to leave a minimum of 1.5” between the handrail and the wall. This “relief” space is there so that people can wrap their hands around the handrail, grasping it for support. This limits the width of the handrail, as it shouldn’t extend into the stairwell more than 3.5”.

Cutting and Assembling the Handrail

Ideally, handrail material should be purchased slightly longer than the stairwell where it is to be installed. While it is possible to join pieces of handrail together, making a longer handrail, it is not desirable. Joining the pieces together perfectly, without getting them out of alignment is extremely difficult.

Measure how long the handrail needs to be, based upon the stairwell itself. If there is an inner stringer against the wall, with a molding on the top, the length of that piece of molding is usually exactly the right length for the handrail. If the handrail is to be installed with a return (the handrail turning 90 degrees towards the wall), then cut the handrail at a 45 degree angle for the miter corner at that point. The marked dimension will be the outside of the miter.

To attach the returns, both glue and finish nails are used, with two finish nails being inserted from each direction, much like nailing a picture frame together. Apply a good coat of glue to both pieces, as the glue will wick into the end grain. Then clamp or hold the pieces while nailing. The tricky part is keeping the miter joint from slipping, while nailing the corner together. Drilling a pilot hole helps with this, as it aligns the pieces and gives the nail a starting hole.

Some carpenters prefer to use screw for joining handrails together, rather than nails. If so, they use small-headed “finish head” wood screws for it. However, there are two problems with this. To start with, the screw head leaves a larger hole to putty in, even when using a finish head screw. Additionally, the screw is going into end grain, which does not make for a strong joint. The threads of the screws actually break up the wood fibers, making them susceptible to pulling out.

In contrast, nailing into end grain produces a strong joint, as nails work by compression. As they enter into the end grain, they push the grain aside, which causes the grain to push back, providing the necessary compression to hold the fastener firmly.

Another option that exists, but is rarely used, is to use a hanger bolt, essentially a threaded stud. These have a wood thread on one side and a machine thread on the other. In use, the wood threaded side is threaded into one piece of the railing and a clearance hole is drilled into the other piece, for the machine threaded side to go into. A 1” access hole is then drilled into the bottom side of the handrail section with the clearance hole for the machine screw side. This access hole must be deep enough so that the hole for the bolt is exposed and close enough to the end of the railing that the bolt will enter into the access hole.

To assemble the handrail, first drill a pilot hole and install the hanger bolt into the part of the railing where the wood thread screw will be installed. Two nuts can be attached to the machine thread side, then turned against each other to form a jam nut. This can then be used to provide leverage for wing in the hanger bolt. Once in, break the nuts free and remove them.

Apply glue to the joining surfaces, making sure to get a good, even coat. As mentioned above, the glue will wick into the end grain considerably. Then slip the machine screw end of the hanger bolt into the clearance hole in the second piece of railing. Place the nut over the end of the machine screw and tighten with a box wrench, taking care to ensure proper alignment of the pieces while tightening. Once the glue sets, they can’t easily be adjusted.

This method is generally considered to be too much work for a return, but it can be useful when it is necessary to join two pieces of handrail together, making a long one. It can also be useful when attaching curved pieces at the end of a handrail.

Go back to the stairwell with the now marked-up level and set the level in front of one of the bottom stair. Verify that it is plumb and that the mark for the edge of the stairs still is aligned for the stair edge. Mark the measurement for the screw hole on the wall. Then move the level up to the top of the stairs and repeat the process.

Snap a line between these two points. This is the line where the handrail brackets need to be installed. Building code requires one bracket at the bottom, one however many additional brackets are needed, to ensure that there are no more than four feet between brackets.

Note that in most homes the studs are spaced 16” on centers. Three times that space if 48” or 4’. However, when measuring at an angle, the overall dimension between those studs is actually more than 48”. If the work is going to be inspected by a building inspector, then I would install the brackets at every other stud, to ensure that I’m under the 48” limit, rather than doing it on every third stud.

Use a stud finder to find the location of the studs, marking both edges and then finding the point between them that bisects the snapped line. Drill a pilot hole at that point, for installing the bracket. Ensure that the bracket is plumb, then drill pilot holes for the other two screw and install them. Repeat this process for each of the brackets needed.

With the brackets installed all that remains is attaching the handrail. Set it in place, and mark the location of the brackets on the bottom side. Then drill pilot hole for the mounting screw, so that it will be easier to get them to go in and they don’t get lost. It’s tricky to hold the clip for the mounting bracket, the railing and the screw all at the same time. A pilot hole makes it easier to align everything and get the screw started.