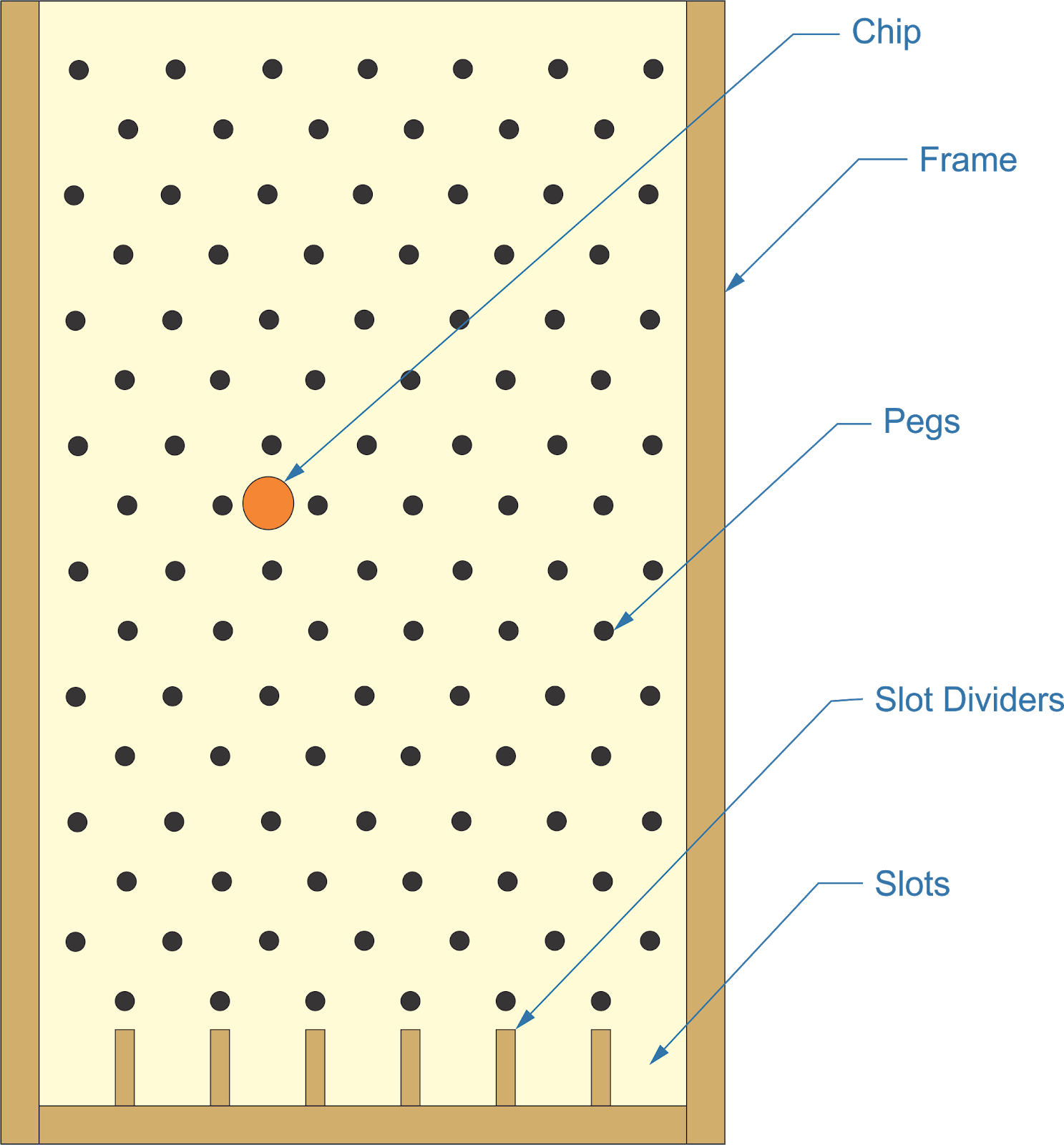 The Plinko Board has become a popular game for children’s parties and school carnivals. But this simple game was actually invented for use on the game show “The price is Right.” There it was played for cash prizes ranging from under $100 up to $50,000, rather than the simple prizes that might be awarded to kids.

For those who are unfamiliar with the game or perhaps don’t recognize the name, Plinko is a game played by dropping round “chips,” something like poker chips, down through a maze made of pegs. Each peg has the ability to bounce the chip sideways in a random manner, making it unsure of which of the various slots the chip will land in at the bottom. Those slots vary in value, with the center one being the most valuable and the value decreasing as the slots move towards the outside.

Any good game has losers and winners and Plinko is no different. Still the odds of actually having any sort of win are 1 in 3.97, which are pretty good odds. However, as the prizes go up in value, the odds become much worse for those playing, with the top prize working out to 1 in over 1 million.

It is possible to stack the odds with fishing line, as was done once by the producers of The price is Right for filming an advertisement. That caused considerable controversy, as the rigged board was actually used on a show being filmed for production. However, the producers solved the problem by allowing the winner to keep the $30,000 they had won before the error was caught.

While it’s theoretically possible to rig the board to channel the chips towards the lower value prizes, just as they channeled them to the $10,000 prize, there’s really no reason to do so in a party game or one that is being used for a children’s carnival. The natural odds associated with the mechanics of the game ensure that the number of high value wins will be at a minimum.

Making the Plinko Board

There are a few different ways of making a Plinko Board; but they all result in the same simple game. Board size can vary from a tabletop model to something that’s eight feet tall. Depending on how wide the board is and the size of the chips, it could have just a few slots in the end or a whole raft of them. Just as long as the total number of slots is odd, with the single center one reserved for the grand prize.

The first step though, isn’t about the board itself, it’s about the chips. The board can’t be made, until the size of the chips is determined. These are usually purchased, rather than made and can either be poker chips, checkers, or larger disks that are intended for use as anything from coasters to fake coins.

The diameter of those chips is important because the spacing of the pegs and the width of the slots in the bottom of the board must both be slightly wider than the diameter of the chips. If the exact size of the chips is not known, it is possible to build a board and then find out that the chips won’t work with it. Oops!

With the diameter of the chips secured, the next decision is how big a board to make. There’s no rule for this or even a standard. It can literally be any size desired. The only real consideration is spacing for the pins and slots at the bottom. A longer board makes for a more interesting game, as there are more chances for the chips to be bounced in unexpected directions.

Most people use a pegboard for the Plinko Board, as that’s the easiest. A sheet of ¼” thick tempered hardboard pegboard isn’t stiff enough by itself, so some sort of frame will be needed. Not all the hole in the pegboard will be used, but that’s not a problem. As an alternate, any sort of plywood can be used, but then, all the holes for the pegs will have to be laid out and drilled by hand.

Cut the pegboard to size, and then make a frame around it on the two sides and bottom. This frame both provides stiffness and holds the chips on the board, if they get to the edge. The frame can be made of any material that the woodworker chooses. A rough Plinko Board can be made by just attaching 2”x 4”s, cut to length, to the sides and bottom of the backboard face. The easiest way to attach them is using narrow-crown staples in a pneumatic staple gun. The top of the Plinko Board needs a piece of wood to support it as well, but in this case, the board must be on the back side, so that it isn’t in the way of inserting the chips.

For a Plinko Board that is going to be used for some time or perhaps one to keep in the game room, it would be nice to cut a rabbet in the edges of the frame pieces, so that the edge of the hardwood or plywood backboard will be hidden from view, making the overall Plinko Board into a finer piece of furniture for the home.

The next challenge is installing the pegs in the backboard. They have to be spaced far enough apart so that the chips can fall down through them, while at the same time, being as close together as possible. In this, drilling holes in a sheet of plywood gives the woodworker the opportunity to be more selective in the spacing of the pegs, although it is more effort.

Spacing of the pegs is uniform throughout, with each row offset 50% from the ones above and below it. Notice the basic design in the diagram above. In it, it’s obvious how the staggering of the pegs is laid out. It is also clear that the chip can fit through the space between any adjacent pegs, but can’t just fall straight down, as the pegs are spaced in such a way that it has to hit a peg in every row as it travels downwards. Please note that the less extra space between the edges of the chip and the pegs, the slower the chip will travel, with the greater possibility to end up being sent off to the side, rather than traveling in a relatively straight line downwards.

A variety of different things can be used for the pegs, including:

If working with a pegboard for the backboard, chances are that the hole used for the pins will need to be drilled out to accommodate the diameter of the pins. A snug fit is desired, with just enough room for gluing the pins in place. Any more than that will weaken the board, allowing the pins to fall out with time.

The slots at the bottom are made by cutting ½” thick pieces of wood to the same height as the frame. Notice in the diagram that they are located directly below the last row of pegs, so that the chips bouncing off those pegs will land in one of the adjacent slots. The width and height of the slots needs to be such that the chips fit inside them.

It Needs a Stand

There is really no need to cover the face of the Plinko Board with Plexiglas, although that can be done. Attaching a sheet of Plexiglas is simple, as it can be screwed to the front. Take care when drilling it however, as Plexiglas cracks easily. Drilling slowly, so that not a lot of heat is generated is the key.

For the Plinko Board to work properly, it needs to stand at an angle, leaning back 5 to 10 degrees. The easiest way to accomplish this is to attach legs to each side, which hold it at that angle. However, if the Plinko Board is to be stored away in the closet when not in use, it might be better to attach one leg to each side, allowing the legs to swivel slightly. Inserting a rubber plumbing ash between the leg and the frame, when attaching the legs, allows the legs to swivel, while offering resistance to keep it in place when set.

Add soft rubber feet to the bottom of the Plinko Board and the legs to help hold it in place while set up.

Turning Plinko into a Game

While the original Plinko was a one-round game, played on the television game show “The price is Right”, it can easily be turned into a multi-round party game. Rather than making each slot equal to a certain prize, each slot can be assigned a point value. Players take turns dropping their chips and scoring points. Winning the game can then be based upon who gains the most points in a given number of turns or who reaches a set point value first.