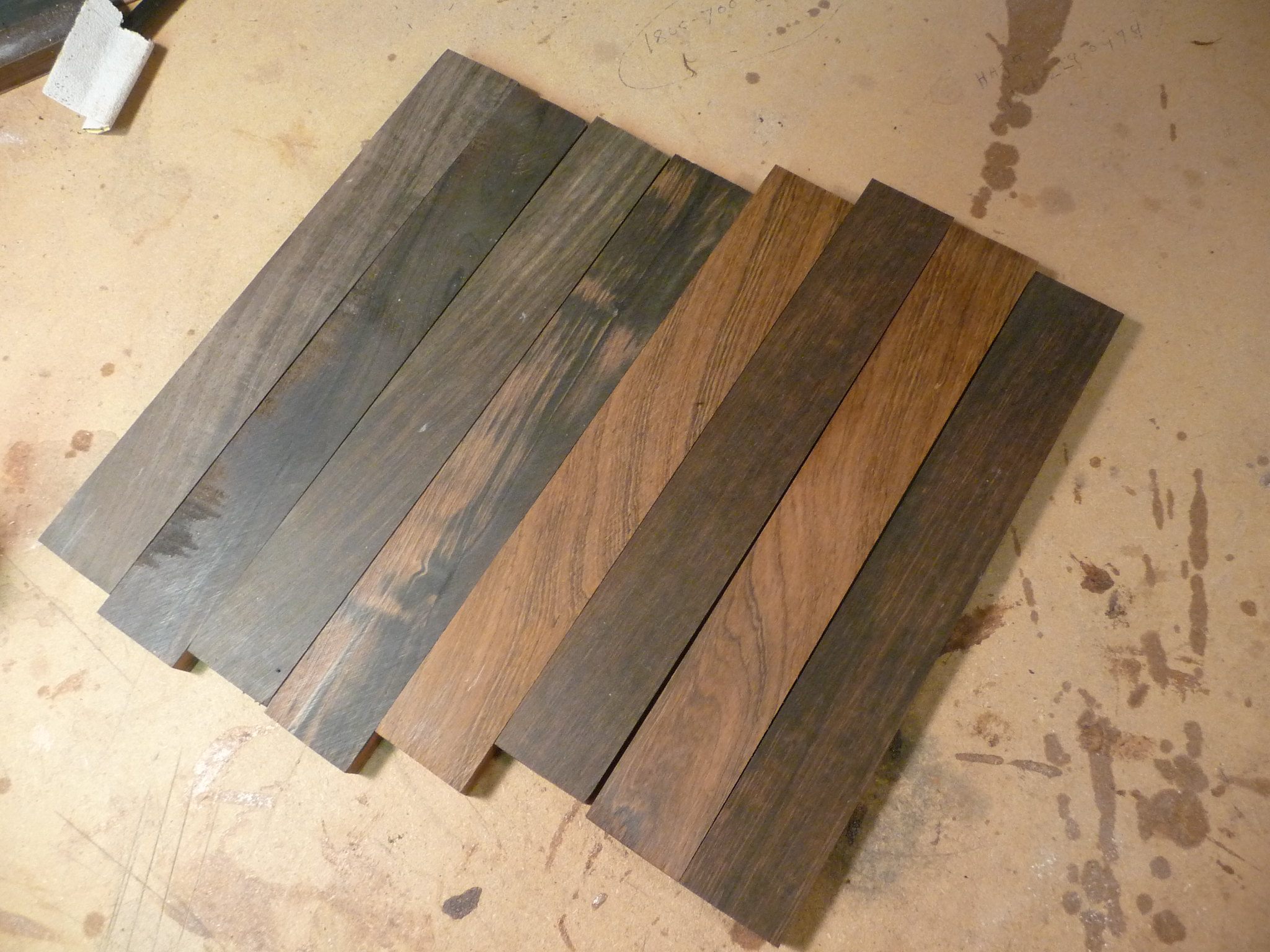 Adding exotic woods to a project, either as an accent or as the main wood used in the project, is enjoyable, making that project special. When properly used as an accent, it can add incredible beauty, without adding a whole lot of cost. Even these expensive woods, when used in small quantities, as accents, actually aren’t terribly expensive. On the other hand, were any of us to do an entire project out of them, we might have to empty out our bank account.

All my life I have stuck with using less expensive woods for my projects, mostly due to budgetary constraints. However, that has changed in recent times, as I’ve been using more and more exotic woods as accents in my projects. However, I haven’t ventured beyond common hardwoods for the major components of my work.

One way of getting more mileage out of these costly woods is to use veneers. Wood veneers allow the same amount of board feet of lumber to be used in the creation of many pieces of furniture, rather than just one or two. At the same time, they also allow us to take advantage of some unusual woods, such as birdseye maple, which only shows up in veneers and burls, which are usually too small for anything but turnings.

Unfortunately, the general attitude towards veneer is negative today, due to vinyl “veneer” used to cover so much inexpensive particle board furniture. But in reality, wood veneer has been in use for centuries and is found on a lot of high-quality, upscale furniture, both of today and of the past.

Many of these costly woods or veneers come to us from around the world, even in remote areas of the world, driving their price up. For the most part, homegrown hardwoods are considerably cheaper, making them much more accessible to the average woodworker. I guess that’s why we see so many projects made of oak, cherry, walnut and maple.

One of the problems in determining which woods are the most expensive is finding a standard of comparison. For our purposes, I’m using websites with the largest assortment of hardwoods I can find. This sometimes requires doing multiple comparisons, as there is no one website I can find, which has all of these listed.

Gaboon Ebony comes to us from the western parts of Africa. It is either a totally black wood or an almost black wood, with streaks of dark grayish-brown. The wood is extremely dense and hard, with a fine grain. Primarily this wood is used for sculpting and carving, although it is also found in more utilitarian items, like doorknobs, gun grips, pool cues and the black keys on a piano. Many string instruments are made with Ebony used for fingerboards, tuning pegs, and tailpieces. The tree it comes from is considered “vulnerable” on the endangered list.

Many people refer to African Blackwood as the most expensive wood in the world; but the pricing I have seen puts ebony higher than it. As the name implies, this wood comes from sub-Saharan Africa. The trees are very slow growing and not very large, so large pieces of African Blackwood are impossible to find. The wood is used predominantly for musical instruments and furniture accents, such as pulls. The tree itself is considered to be endangered.

Pink Ivory is another wood that comes to us from the continent of Africa, where it grows in the southernmost part of the continent. This unique wood is actually pink and can even be a rather vibrant shade of pink, almost a purple-red. It is extremely rare and therefore used for turning, knife handles and other artistic uses, such as jewelry. At one time, it was considered to be the sole possession of Zulu royalty; others in possession of it would be put to death. While not being endangered, the tree is protected and harvesting is carefully controlled.

Similar to rosewood, Ziricote provides a very obvious grain pattern, with beige or medium brown and dark brown streaks. The grain patterns of this beautiful wood can be rather extreme, with “spider webbing” or “marbled swirls.” The wood is slightly brittle, but is commonly used for steam bending. It is relatively easy to work with. It only grows in a limited area, including Southern Mexico, Guatemala and Belize. Due to the grain patterns, it is a favorite wood for instruments, gunstocks and inlays on furniture. The wood is rare, but not considered endangered in any way.

Brazilian Rosewood, otherwise known as Bahia Rosewood is a beautiful wood with a two tone reddish brown and dark brown grain. The highly figurative grain in this wool makes it popular for many things, especially furniture. It is an oily, which makes it hard to glue; but which also protects the wood from insects and decay. It is also highly aromatic, smelling somewhat like roses – hence its name. There are many other varieties of “rosewood” sold, not all of which are truly rosewood, as they don’t come from the same tree. While these all look similar, they aren’t exactly like Brazilian Rosewood, as even the same tree will grow differently in different climates. Brazilian rosewood has gained so much popularity that the Brazilian government has outlawed the export of rosewood logs; so most of what you find on the market is actually some other sort of rosewood.

Cocobolo comes to us from Central America and the southern part of Mexico. It is a favorite wood for use in stocks for expensive handguns and scales for knife handles. The wood has a multi-colored grain, consisting of reddish-brown and dark brown colors, with light tan sapwood; but only the heartwood is used. The grain patterns in the wood, as well as the ability to polish it to a high gloss make it a favorite for crafting musical instruments, as well as chess pieces. An oily wood, Cocobolo is difficult to glue or use as a veneer. Due to dwindling forests it can no longer be harvested in Panama and it has all but disappeared in costa Rica. However, it is still available from Mexico and Nicaruaga

Similar to Gaboon Ebony, Macassar Ebony is considerably less costly. It comes to us from the island of Sulawesi in Indonesia. It is most commonly used in furniture, although that use has slackened off as the wood has become harder to find. The wood commonly displays “faults” showing cracks and splits. It dries slowly and must be allowed ample time to dry, before use. Today, Macassar Ebony is considered vulnerable to extinction, in part because of the limited area in which it grows.

Koa comes to us from Hawaii and other pacific islands, where it receives a lot of rainfall. The wood is a beautiful waterfall of streaks of different shades of brown, including reddish-browns and yellowish-browns. prices are climbing on this wood, as its natural habitat is dwindling. More than anything, Koa is used for folk string instruments like guitars and ukuleles, although it is a beautiful wood for furniture making. Many of the wooden souvenirs sold in Hawaii are made of Koa, where it is the second most common tree. There is no risk of extermination at this time.

Bubinga is most commonly sold as a substitute for Rosewood, although it doesn’t have as outstanding a grain pattern as Rosewood does. It comes from Central America, where it is fairly common. The trees grow to be immense, which helps keep the cost down and makes it possible to get large slabs for live edge projects.

Holly is one of only two hardwoods on this list which actually grows in the United States, although there are some 480 different plants that fall within this family. The very pale coloration and fine grain make it ideal for turning and carving. The white color also sees this wood used for piano keys and inlay work. The tree isn’t very large, driving up the price, as well as making it almost impossible to find holly boards.

As hard as it might be for us woodworkers to believe, there are actually some woods that are not used for woodworking. Where I live there are a lot of mesquite trees, but even so, Mesquite is rarely used in woodworking, other than for live-edge tables and countertops. Cork wood is impossible to buy, as best as I can tell. The tree that it comes from is actually a type of oak. What we know as cork is actually made from the bark of the tree.

While none of us are going to be able to buy these woods and use them to make a piece of furniture, I thought it would be fun to include them.

Sandalwood is a highly aromatic wood that grows throughout Southeast Asia and the islands of the South Pacific. Because of its aromatic qualities, it originally became a sacred wood for a number of different people groups. From there, its influence, or perhaps I should say “its scent,” has spread around the world, especially for use in perfumes, candles, incense and soaps. I cannot find a place which sells sandalwood boards or turning pieces. In searching, the biggest piece I found was just shy of six cubic inches and is priced at over $800.

Agarwood is another aromatic wood from Southeast Asia. Like Sandalwood, it is not used as boards or for turning, although some small carvings have been done with it. Rather the wood is prized for its aromatic qualities. Much of the rarity of this wood comes from the fact that it only forms due to an infection of the heartwood of the Aquilaria tree. Before infection, the heartwood is odorless. Its most common uses are for incense and perfumes. I found a small carving online, weighing 312 grams, which contained Agarwood; its price tag was $15,000.

In comparison to the woods listed above, American hardwoods are considerably less expensive. Part of that is due to the ready supply of these woods, with none of them nearing extinction. But another part is that they don’t have to be shipped from overseas, an expensive operation. While we may not find the same wild grain patterns on these domestic hardwoods as some of those mentioned above, they still make beautiful furniture. Adding in the others as accents can only improve on how our native hardwoods look.

When we talk about native American hardwoods, we are normally talking about: walnut, oak, cherry, maple, basswood and ash. While these are not the only hardwoods that grow on American soil, they are the most commonly available. However, those who have land and a sawmill can harvest other types of wood, converting them to boards for a variety of projects.