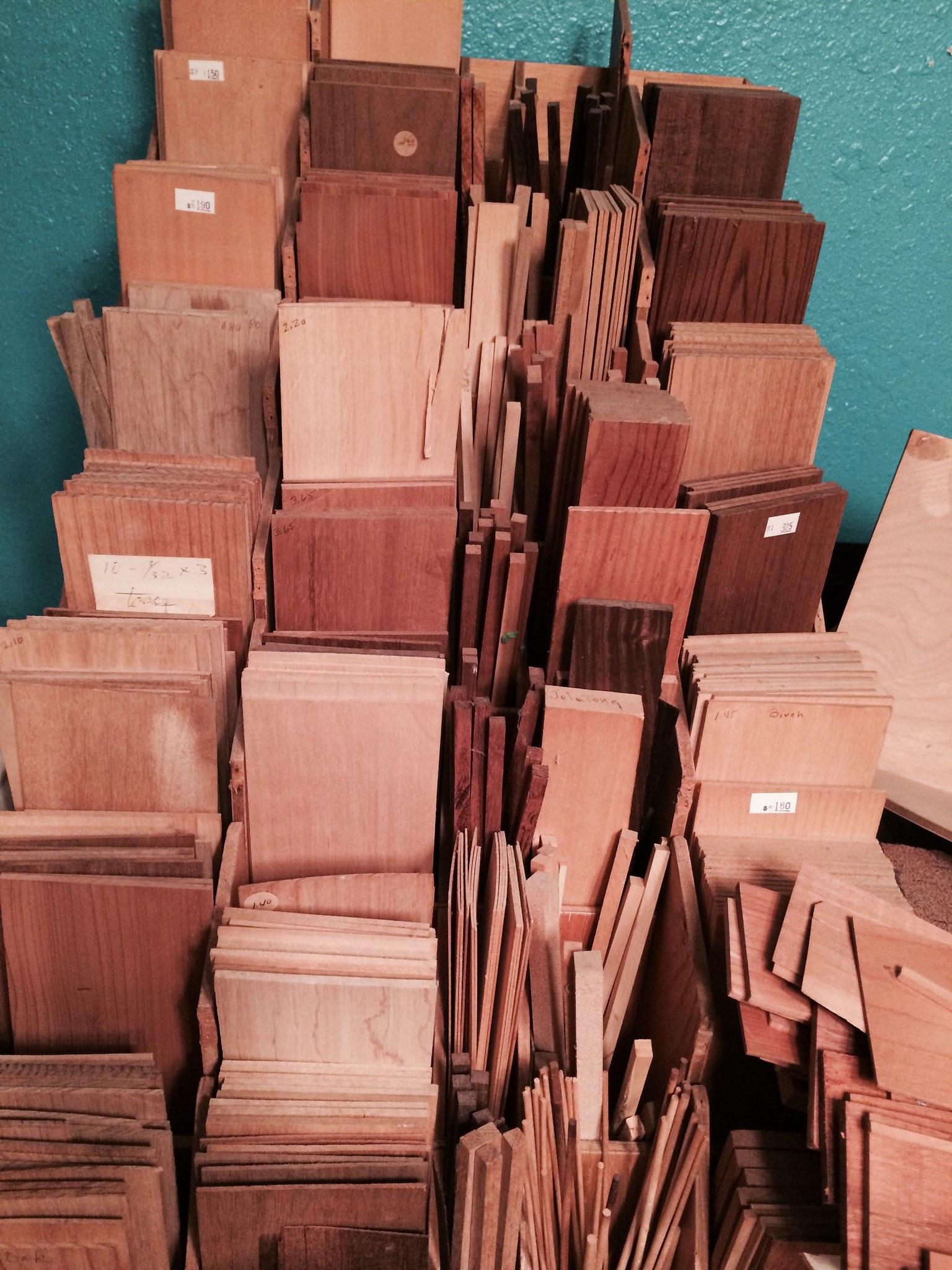 All types of wood are broken down into three basic categories: hardwood, softwood and engineered wood. When we’re talking about engineered wood, we’re usually talking about the various forms of plywood, including such things as MDF and OSB. Engineered woods are distinctive in that they are made of wood fibers which have been separated from the log and reattached together, usually using some sort of resinous glue and pressure. Most engineered wood products are sold in sheets, although there are a few which take other forms, such as cross-laminated timber (CLT).

For the moment, we are concerned with the differences between hardwoods and softwoods. This difference is not how dense or hard the wood is, regardless of how those names sound; but rather the way that the trees grow. While most softwood can be considered to be softer than most hardwoods, there are some significant exceptions to that generality.

Once the trees have been cut and their trunks and branches have been converted to wood products, it’s considerably harder to tell, just by looking at the wood, whether it is hardwood or softwood. Most woodworkers do this by knowing the various species of wood they are working with. But what if wood is found that is of an unknown species? Is it possible to tell if it is hardwood or softwood?

It turns out that there is a basic structural difference between softwoods and hardwoods, one that reflects in the ways that the trees grow. While it might be necessary to use a microscope to see it, hardwoods all have pores in them. While the tree was alive, these carried water through the tree. Softwoods do not have pores, because the water is carried in sap, which is transported via medullary rays and tracheids. This difference allows softwoods to be more flexible than hardwoods, hence the common use of yew (a softwood) in making wood bows for archery.

It is these pores that give hardwoods their more distinctive grain patterns. Perhaps oak is the most obvious example of this, as only certain parts of the log or board will have pores in it. The adjacent rings will not have any pores and are lighter.

By and large, softwoods have a higher growth rate than hardwoods, allowing for more rapid reforestation and the wood produced by softwood trees to be sold for less. This is the main reason why softwoods are more common and are used regularly for building materials. Hardwoods, on the other hand, are usually only used for high-quality furniture, flooring and other purposes where a long life is desired.

Generally speaking, we think of pine, when we think of softwood. That’s a natural result of pine being the most common softwood on the market, and the wood that is most often used for home construction. Pine is a good choice for this due to the way that the tree grows, with the trunk not splitting and the branches growing out perpendicular to the trunk. This means that the branches are of a smaller diameter, making smaller knots in the wood. It also means that the branches are not usable for cutting boards or veneer out of.

When the branches are stripped from a pine tree, the trunk is left as a long, straight log, which is readily cut into sections and transported to the mill. Once there, the log is easily milled, turning it into usable wood products. Hardwoods often require more work to turn into boards, because of the trunk splitting off into branches, each of which has to be converted into logs and worked separately. This makes it difficult to get the long boards needed for construction from the logs.

Pine trees are not the only softwood trees though. Several other species fall into this category, including redwood and cedar, both commonly used woods.

While the terms hardwood and softwood don’t necessarily indicate just how hard the wood is, by and large hardwoods have a higher density than softwoods, making them both harder and stronger. However, there are some hardwoods which are softer and less dense than softwoods, such as balsa, which is widely considered to be one of the softest woods there is, but is categorized as a hardwood.

Softwood is most often used for the manufacture of homes and home building products. Wood architectural molding is made of softwood, as well as 2”x 4”s and other dimensional lumber and construction-grade plywood. By and large, softwoods are considered easier to work with, due to their lower density. However, this can turn on itself in some applications.

The hardest softwood is aromatic cedar, which is popular due to its natural resistance to rotting. The oils in cedar repel insects, as well as the fungus that normally causes rotting. It was once a popular wood for lining closets and making chests for storing clothing and bedding, due to the wood’s ability to repel moths that eat wool. While it can still be used for this today, it is not as common, due to less clothing and bedding being made of wool.

When making furniture or other fine woodworking, softwoods tend to tear out and splinter more. Clean cutting of softwoods requires sharp saw blades, chisels, planes and drill bits. When dull blades are used, the lower density of the wood allows it to tear out easily.

Recently, I was making a bracket for a railroad bell I intend to use as a doorbell. The construction of the bracket was being doweled together for strength. Yet, when I tried drilling into the pieces of pine for installation of the dowels, the holes tore out through the sides. I ended up remaking the parts out of poplar, one of the least expensive and most readily available hardwoods.

Perhaps this tendency to tear out is most visible when turning softwood on a lathe. Lathe turning is more akin to scraping, than it is to cutting. This is made obvious by the angle that the chisels are held to the turning axis of the workpiece on the lathe. We can compare this to the difference between using a plane and a scraper. The plane blade will usually be held at a 45 degree angle to the workpiece, unless it is a block plane, which will hold the blade at 25 degrees. But a cabinet scraper is held at 90 degrees or even a bit past 90 degrees in order to cut.

The same can be said for lathe chisels; so the chisels must be kept extremely sharp when turning softwood on a lathe. If they are not, the fibers of the wood tend to tear; leaving a rough surface that needs considerably more sanding. Worse than that, the tears might be deep enough that they go below the desired surface for the piece.

Due to its cost, hardwood is generally reserved for the making of furniture and flooring. However, the cost of hardwoods can vary considerably, with domestic hardwoods being considerably less costly than imported ones, with maple being the least expensive hardwood available. The cost difference between the various types of hardwoods is based upon the rarity of the trees which provide the different woods. These trees also grow considerably slower than softwoods, adding to their rarity and value.

The problem with working hardwood can also be attributed to the sharpness of the cutting tools, as dull tools have trouble cutting through the higher density of the woods, especially hardwoods which are considered to be very dense, like oak, maple, teak and walnut.

However, the cutting problems with these dense hardwoods won’t lead to tearout of the wood fibers; it will lead to the cutting tool not being able to cut through the wood. In the case of power tools, this can result in friction burning of the wood’s surface, along the cut, due to the blade or bit rubbing over the same spot in the wood for a considerable amount of time. This means that sharp blades are necessary for working hardwoods, even more than for softwoods, albeit for a different reason.

The finer grain in most hardwoods makes for very accurate cutting and cleanly drilled hole. The cutting action may be slower, due to the density of the wood, but it will be clean. When it is necessary to use planes and chisels on the wood, such as for making a mortise and tenon joint, hardwoods make a very clean cut, providing an accurate, clean surface for gluing.

While the differences between working hardwoods and working softwoods can be considerable, they might not be so obvious when working with engineered woods, specifically when working with plywood. Construction-grade plywood is made of 100% softwoods, usually pine. But hardwood plywood may not be 100% hardwood. There can be considerable variety, with much hardwood plywood providing only a hardwood face veneer, bonded to softwood core veneers. In this case, the face and reverse veneers will be very thin, considerably thinner than that for softwood plywood. Care must be taken when sanding to avoid sanding right through the face veneer.

Hardwood plywood may also be made over a MDF or particleboard core. There is also a “combination core” which combines MDF and veneer layers. It is important to check what type of core is provided, whenever purchasing hardwood plywood. While it will all work, some types may be considerably stronger than others.