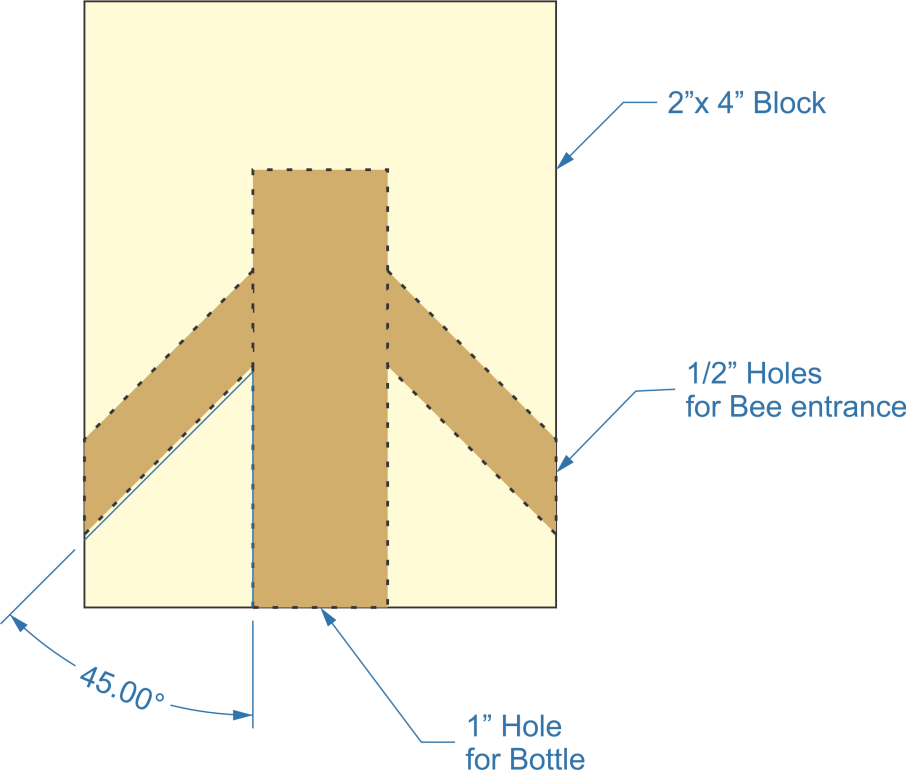 Carpenter bees are one of the lesser known relatives of the honeybee, some 35 actual species, which live all across the United States and Canada, but especially in the south and east. The various species vary considerably in size; but the larger ones, which can range up to an inch long, are the most widely known. Their common name as “carpenter bees” comes from the bees burrowing into wood to nest. Like other bees, they are pollinators, not wood eating insects.

Whereas most species of bees build community honeycomb nests, usually in already existing cavities in trees and other structures, carpenter bees burrow hole into dead, decaying wood in order to nest. These nests are where the females of the species lay their eggs and are also used for both males and females to nest through the winter. Unlike other species of bees, they do not make honey.

For us, carpenter bees are mostly a nuisance, as they can burrow into the wood of our homes, causing damage. While one bee burrowing into the home produces only insignificant damage, the cumulative damage from a number of bees can be a concern, especially if the problem is ignored and continues.

But it is not only the damage caused by the carpenter bees themselves that is of concern; woodpeckers eat the bee larvae, enlarging the original hole in an effort to get to them. Another concern is the damage caused by weather, what is often mistakenly referred to as “dry rot,” where water soaking into the wood fibers exposed by the bees’ holes allowing fungi to grow, feeding on the wood in the process.

One good piece of news is that carpenter bees will usually avoid burrowing into painted or stained wood; so proper maintenance of the home, specifically painting it when needed, will go a long way towards keeping carpenter bees from damaging a home. But if there is no place else for them to nest, they will burrow into wood that is covered by paint. So painting alone isn’t enough, if there isn’t something available to catch the bees, protecting the home.

A carpenter bee trap is extremely easy to create, providing a means of either killing or relocating the bees, depending on the homeowner’s choice. While some bees may die in as little as a few hours, most will live considerably longer, as much as two weeks. This allows several to be captured, then the trap opened at an alternate location, releasing the bees back into nature, where they can serve as pollinators.

The key to how a carpenter bee trap functions is much the same as a fish trap. An easily accessed entrance is provided for the bees to enter the trap. However, once they are inside, it is almost impossible for them to find their way back out, making the trap effective for multiple bees.

A carpenter bee trap is made of a block of scrap wood, either a 2”x 4” or 4”x 4”, along with either a plastic soda bottle or glass jar. In either case, it’s going to be necessary to save the lid, as the lid is used to attach the bottle or jar to the wood block. The wood is the entrance part of the trap, with the bottle or jar being the holding area for the trapped bees.

Obviously the wood is what attracts the bees, bringing them to the trap. But the clear plastic bottle or glass jar serves an important purpose in ensuring that the bees stay trapped. Because the bottle or glass is clear, the bees can’t identify which way is out, keeping them trapped inside.

Since most of us have plenty of scrap 2”x 4” pieces sitting around, we’ll start there. This will require blocks of 2”x 4” which are between 4” and 6” long. If a number of traps are to be made, then it makes sense to cut them all to the same size.

Mark a 1” spade bit with masking tape at roughly ¾ the length of the block. This will act as a depth gauge when drilling. Then mount one of the blocks of 2”x 4” into a bench vice or drill press vice to hold it. Drill a 1” hole in the center of the end of the 2”x 4” block, to the point of the masking tape.

Reposition the wood block so that the hole is horizontal with the ground. Then drill a small starter hole (1/8”) in the side of the block, then angle the cut roughly 45° to intersect the 1” hole in the center of the block, as shown in the diagram below. Repeat for the opposite side, making a hole that’s roughly a mirror image of the first. For both holes, ensure that the passage from the entry hole to the 1” hole is not obstructed by wood chips that are not cut off by the drill bit.

The entry hole need to be ½” in diameter, so as to provide ample room for the carpenter bees to enter. So enlarge the hole by stepping up the drill size, through a couple of different steps up to ½”, enlarging the existing hole. While it would be possible to go immediately to a ½” drill bit, it would not follow that small a guide hole all that well and could very easily catch in the wood while drilling.

An alternative is to use a ½” brad point drill for drilling this hole. Brad point drills are made specifically for drilling into non- flat surfaces, such as spheres and drilling angled holes, like what’s needed for this project. The brad point acts to create a starter hole, then the drill can be angled, as the brad point will prevent it from slipping off that location. Take care when the lips of the drill bit make contact with the wood, as it can catch.

The last thing that needs to be done to complete the block is to add some means of hanging it; either a screw eye or a wire staple, such as those used for attaching poultry cloth is ideal.

Remove the cap from the bottle and drill a ½” or larger hole in the top of it. If the cap is drilled upside down on a backer block, it is much more likely to cut cleanly. Still, because it is made of soft plastic, the hole might end up lopsided. In that case, the hole should be rounded out with a utility knife. It doesn’t matter if it gets too big, just as long as it isn’t the full diameter of the cap.

Glue the modified cap into the 1” hole in the wood block, top (drilled) side in, leaving the bottom edge of the cap flush with the edge of the hole. Hot melt glue is ideal for this, as most other types of adhesives will not adhere well to the type of plastic used to make the cap. Attach the bottle and the trap is finished.

If scrap 4” x 4” is available, that can also be used for making a carpenter bee trap. The block is made much like the 2”x 4” block we just discussed, the only difference being that one entryway should be drilled into each side of the block, for a total of four. Once again, make sure that all the angled hole give free, unimpeded access to the larger central hole.

Take the lid off the jar and drill a ½” hole through it, deburring the hole so that there are no sharp edges remaining. Then place the top of the jar lid centered over the 1” hole in the block. Attach the lid to the block with two screws, taking care to avoid running the screws into any of the holes drilled into the block. Reattach the jar to the lid and the trap is ready to go.

Where to Hang the Traps

The best place to hang the traps is from the eaves of the home, as high up as possible on the sunny side of the house. Traps need to be visible or the bees won’t see them. At the same time, they need to be located where they will receive some protection from the rain, so don’t attach them to the fascia board, rather, to the rafters or ends of the trusses.

Each trap will protect about a 15 foot radius, so it is likely that several will be needed around the perimeter of the home. Ideally, they should be hung in the springtime, before the bees become active. That way, they will be a normal part of the scenery, rather than something you add later.