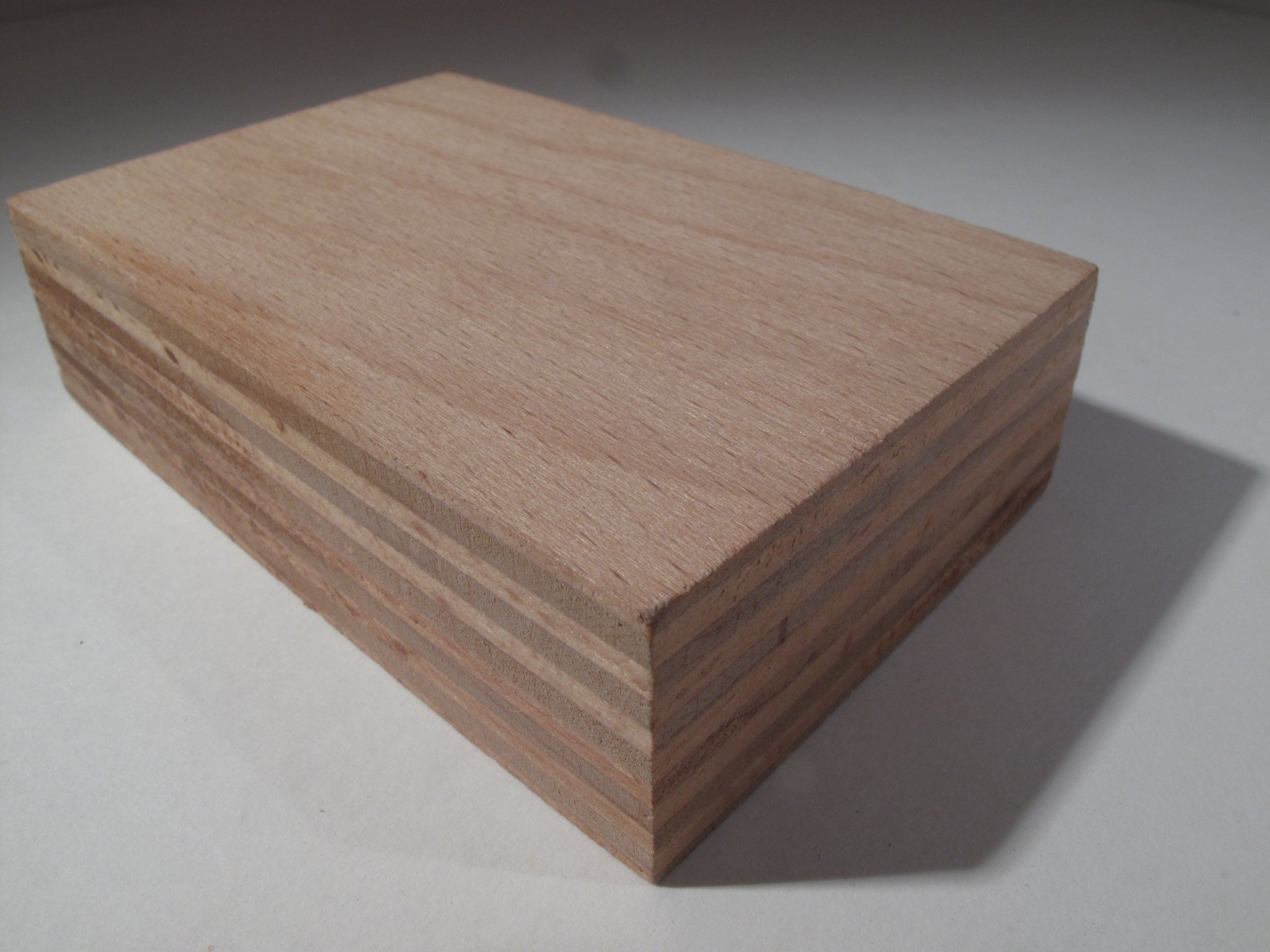 Birch plywood is one of the more popular hardwood plywood varieties, being commonly used in cabinetmaking, furniture making and even in making jigs in the workshop. As hardwood plywood goes, it is one of the lower cost varieties, while providing clean, smooth and attractive grain. By and large, birch plywood has few voids and is dimensionally stable, making it ideal for applications like cabinetmaking where expansion can be a problem.

By comparison, Beech plywood is all but unknown, although the price per sheet is actually a couple of dollars lower, the grain is straighter and it has excellent workability. But beech plywood is harder to find, as it is not commonly carried at local lumberyards and home improvement centers. Nevertheless, it can be found through suppliers who specialize in hardwoods and especially hardwood plywood. It is most commonly available in ¼” and ¾” thicknesses, with A and B face grades.

For reference, A-grade face veneers must be matched for both color and grain, with splices book-matched to create a pleasing appearance. No abrupt changes in color, sound knots, repaired knots or rough-cut veneer is allowed. B-grade still requires that the veneer be color matched, but not matched for grain. Some sound and/or repaired knots are allowed. A small amount of vine marks and mineral streaks are allowed.

Beech plywood that is ¾” thick may have a PXB core, rather than a typical laid-up veneer core. This is an engineered plywood core, where the two layers directly behind the face and back veneers are made of particleboard, providing a very smooth surface for the face veneer to be glued to. Other layers in the core are veneer, providing the required strength.

The Beech tree, fagus grandifolia, grows throughout the eastern part of the United States, where individual trees can reach 100 to 130 feet tall, with a 3 to 5 foot trunk diameter. The height of the tree allows for a long trunk, without branches, allowing for a relatively large amount of wood to be harvested from one tree. The wood is typically a pale cream color, although it can sometimes have a slight pink or brown tint to it. Dampening the wood brings out more of a golden tone, darkening it. The grain is extremely straight, without the swirling that is common to birch. It is similar to maple for workability and hardness, while being slightly darker in color.

While comparable to working with maple, beech is considerably lower in cost, an important factor on many projects. It was in common use in early America, as seen in the large amount of Early American furniture that was made from this wood. Those early furniture makers recognized that the straight grain of the beech tree provided more strength to furniture made out of it, with less possibility of cracking and splitting. Beech is actually slightly stronger than red oak. It is strong enough that it is one of the types of wood that railroad ties are made from.

On the flip side of that coin, beech absorbs a lot of water, making it less stable than some other woods. Warping and twisting can be a problem, especially when the wood is not dried properly. Projects made out of beech wood should be kept indoors, away from moisture. They should never be used outdoors.

Because of the difficulty of obtaining beech plywood, solid hardwood pieces are often used in conjunction with birch plywood in cabinetmaking. The two woods are similar enough in appearance that most people don’t realize that two different varieties of wood are being used. Being a very solid wood, beech is slightly stronger than birch.

Another common furniture making use of beech is in bentwood furniture where steam is used. Because the wood readily absorbs the steam, it is very flexible, allowing it to be used for more complex curvatures. However, sufficient dry time is required for the wood to get back down to a normal moist content.

Beech is an excellent choice for both cabinetry and furniture-making as it is easy to work with. The fine, straight grain is ideal for pieces which are not intended to focus on the grain of the wood, but rather on the overall shape of the piece. The high workability, with low possibility of splitting makes it ideal for situations where shaping or cutting are likely to cause splitting in other types of wood.