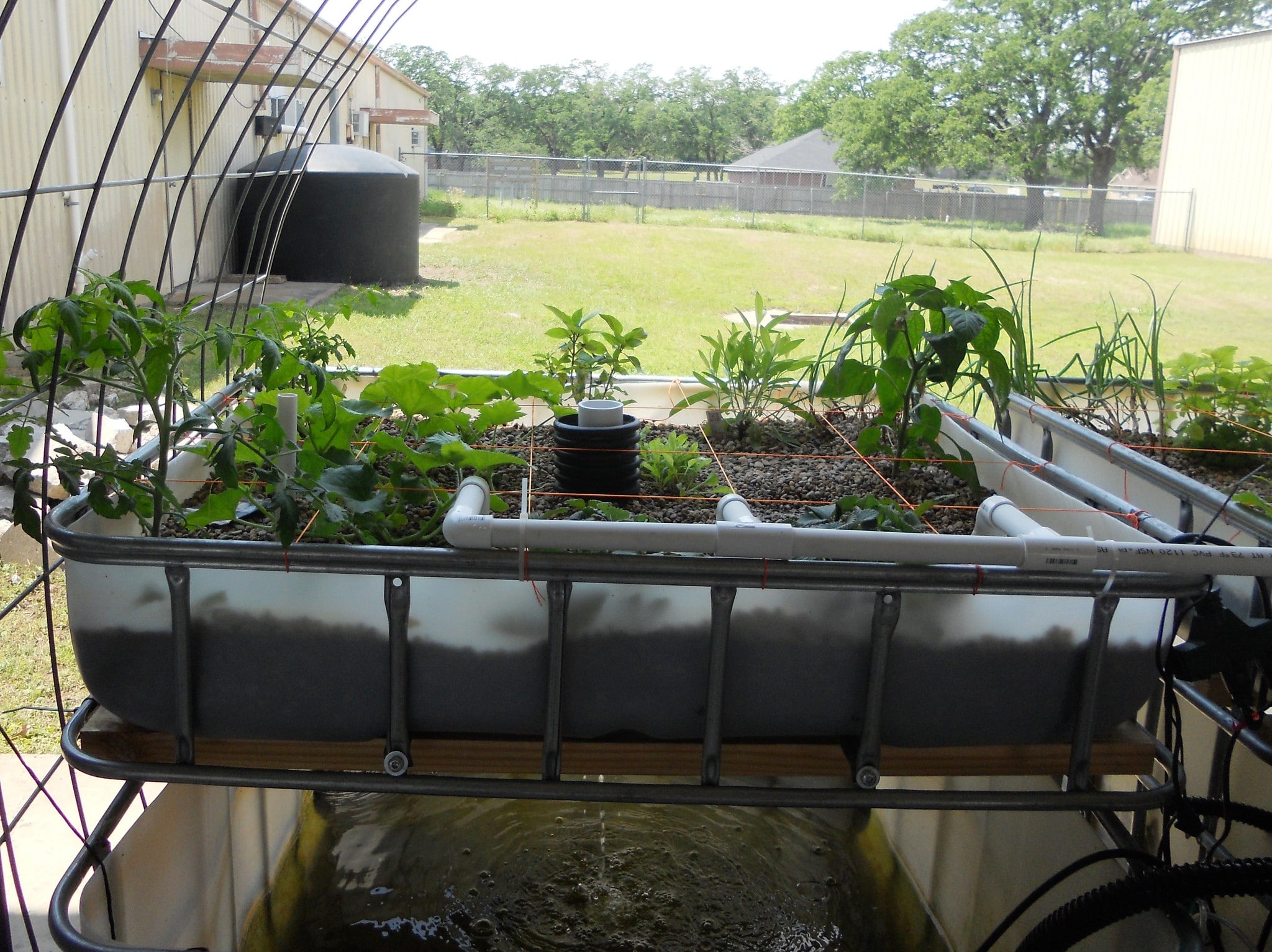 Aquaponics has gained a lot of traction in the last few years, especially amongst the prepping and survival community. But it’s not a technology which is limited to those who are preparing to survive disasters. Rather, this is something that anyone who is into gardening can use effectively to grow their own food.

While the name may confuse some people, aquaponics isn’t the same as the better known hydroponics. The basic difference is where the nutrients for the plants come from. In hydroponics, plants are grown in a water bath, often using some sort of medium, like gravel, to give the roots someplace to gain purchase. Nutrients for the plants are added to the water on a regular basis.

There are three main nutrients needed for proper plant growth, as well as a number of minor nutrients. These major nutrients are:

Of course, there are a number of micronutrients needed as well, mostly minerals. These include common minerals, like copper, cobalt, iron, manganese, zinc, sulfur, boron and magnesium. We eat vegetables to gain these nutrients, in addition to carbohydrates; so if the plants we grow don’t receive them, we won’t have them in our diets either.

With aquaponics, these nutrients for the plants come from fish waste. Bacteria in the water break down this waste to the basic nutrients, which the plants are then able to consume. The fish are fed by a combination of algae growing in the tank and insect protein, usually mosquito larva or earthworms.

To a large extent, a hydroponics garden is a closed environment, with the plants, bacteria and fish all helping each other. About the only thing which needs to be added to it, is food for the fish. But with that addition, you can have a very efficient growing environment.

An IBC (intermediate bulk container), which holds 275 gallons of liquid, is a good starter for a home aquaponics garden. This is a square plastic container, built onto an aluminum pallet, with an aluminum framework around the container. The whole thing forms a roughly four foot cube, weighing about 100 pounds. You can find used IBC containers at the same places that sell used blue plastic barrels.

To turn that into an aquaponics garden, first the top has to be cut off. How it is cut off depends on the growth medium to be used for the plants. There are three basic options:

While any non-chlorinated water can be used for aquaponics, at least some of your water should come from a local pond. That way, it will have bacteria in it, to start the breakdown of the fish waste. Without the bacteria found in that pond water, it will take a long time to get the system started.

The plants can be added to the system at any time, but if they are added before the fish, then it will be necessary to provide nutrients for them. Those nutrients can either come from the same sort of chemicals that are used for hydroponics, fish emulsion (which is a great fertilizer), or from adding a couple of shovelfuls of manure to the bottom of the fish tank for the bacteria to start breaking down. This is especially good if you are starting out with small fish that need to grow.

Getting the Fish Part Going

The harder part of starting any aquaponics setup is getting the fish part going. You’re going to be starting out with fingerlings, which won’t be providing much waste. As they grow, they’ll provide more. This should actually work out well, as your plants will need more nutrients as they grow.

There are several considerations in choosing the fish you are going to grow as part of your aquaponics setup:

While there are a number of different fish that you can choose from, which will meet these requirements, probably one of the easiest fish to work with is tilapia. Although this breed of fish is not native to North America, it has adapted well here. Tilapia do not require a lot of space, grow well, need minimal care and will eat the algae off of the sides of the tank, helping to keep it clean.

Setting up the Tank

Tilapia needs a tank that is at least three feet deep, which works well with the IBC we were discussing a moment ago. They will spend the majority of their time in the lower part of the tank, coming up to the surface at feeding time.

Loose gravel should be added in the bottom of the tank, to keep the fish waste from going down the drain valve. Screen across the drain valve to keep the gravel from flowing out. This gravel also acts as a great place for the bacteria to digest the fish waste, turning it into nutrients for the plants. Other aquatic plants can be anchored into this gravel, providing food for the fish.

In addition to mixing the water, it will need to be oxygenated to provide oxygen to the fish. This is most often done with a bubbler. A small air pump, such as those used for aquariums, will pump air into a dissipator that is placed in the bottom of the tank, under the gravel. This mat breaks the air up into small bubbles, which will work their way through the gravel and rise to the surface. As the bubbles rise, some of the oxygen will be absorbed into the water.

The maximum number of tilapia you can have in this sized tank is 60. Other fish will require a lower fish density. But the real issue isn’t how many fish can grow in the tank, but what the pH of the water is. Aquaponics requires a delicate balancing act between the fish and the plants. You’ll need to check the pH of the water regularly, adding or removing both fish and plants, as needed, to strike a good pH balance. If the water is too acidic or alkaline, the plants can’t grow.

For this reason, it is a good idea to have a secondary tank that you can move fish into or out of, as needed. It needs to have the same system for aerating the water, as well as a means of cycling water out of the tank, if it gets too loaded with nutrients. That water can always be used to fertilize your garden, if you don’t need it for your aquaponics setup.

One thing to keep in mind is that although we’re talking about a four foot cube for a starter aquaponics garden, the larger an aquaponics setup you have, the easier it is to balance the number of fish and plants, keeping the pH within an acceptable range.

You will need to keep the water in your fish tank at least somewhat clean. This can easily be done by drawing off about 20 percent of the water every week and replacing it with fresh water. Always be sure that the water you are adding is chlorine-free. So if you are using tap water, allow it to sit out for at least 24 hours, so the chlorine can evaporate.

The water you have drained out of your fish tank will be rich in nutrients. So don’t just throw it out; rather, pick out where you’re going to throw it, so that it can nourish some other plants in your garden beds or your trees.

How you feed your fish will depend in part on what type of fish you choose to use. As I mentioned earlier, some fish are carnivorous, requiring feed fish. Other types of fish, like tilapia, eat a combination of plant life and insects. Growing these fish is easier, as you don’t have to grow the feed fish.

For insects, you can either grow mosquitoes or worms. Mosquitoes are easy to grow, with little effort. All you need to do is leave open containers of water sitting around and allow the adult female mosquitoes to lay their eggs in the water, something they will do whether you want them to or not. Those eggs are laid in “rafts” of eggs, which are stuck together. These will hatch after some time, allowing the mosquito larva to swim around in the water, looking like small worms. When you have a few hundred larvas swimming around in the water, you can dump the bucket into the fish tank for consumption.

Of course, the risk of growing mosquito larva is that you might end up with a lot of mosquitoes flying around your backyard, making your gardening efforts dangerous. For that reason, my personal preference is to use earthworms.

You can buy earthworms online in packages of various sizes, up to 1,000 wigglers. That’s enough to start a good worm farm, giving you plenty of worms for feeding your fish, your compost bin and for your garden. Extras can always be let loose, where they will help aerate your soil and break down organic matter to nourish whatever you have growing in your backyard.

To set up a worm farm, cut a 55 gallon barrel in half and fill it most of the way full with compost. Then just throw in the worms. They’ll get to work breaking down that compost and multiplying. When it’s time to feed your fish, simply grab a handful of worms and throw them in the fish tank. Don’t worry about the compost, as that will settle to the bottom of the tank.

One of the problems with aquaponics is what to do with the fish in the wintertime. Fish are cold blooded, so they will survive outdoors, in the tank, as long as the tank doesn’t freeze. Adding a small heater might be all that you need to do, to keep your fish alive through the winter. If you’ve used an IBC for your tank, the pallet holds the tank up off the ground, which will help keep it from freezing.

Tilapia are actually tropical fish, so just keeping them from freezing isn’t quite enough. They need water which is a minimum of 45°F to survive. Better yet, try to keep it at 55°F.

Of course, having your aquaponics system in a greenhouse will keep it warm. The greenhouse is the original passive solar structure, designed to keep the insides warm enough for growing, even when the ambient air temperature is too cold for it. If you already have a greenhouse, you might want to consider building your aquaponics system inside it. If not you might want to consider building a temporary greenhouse around your fish tank for the winter.

Another way of keeping your fish tank warm through the winter is to bank compost around it. Composting generates quite a bit of heat, so if you have an active compost heap up alongside the tank, it will provide quite a bit of free heat for your fish.

If you live in a cold enough climate where it is impossible to keep your fish outside through the winter, you might want to consider moving some of them indoors, either into a tank in your garage or your home. You don’t need to save all your fish, merely enough to start the population over in the spring. The remainder can be eaten.