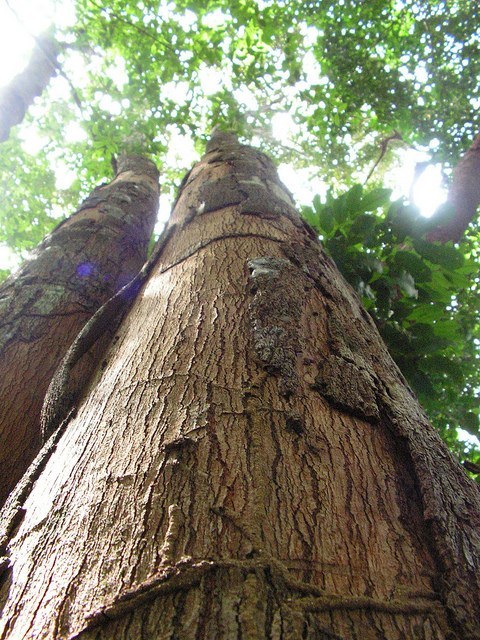 Virola is a relatively new wood in the plywood family. This is one of the few woods which are sold under their scientific name, rather than their common name. It is also known by the names Ucuuba, Sebo, Dalli, Cumala, Cajuea and various other names. The virola tree is one that is largely considered a junk tree in Brazil, where it comes from. If not harvested, the trees fall over in the swamp and decompose.

That’s not to say that the plywood will do that though. Virola plywood is similar to Luan or Mahogany plywood and used in many of the same applications. An inexpensive plywood, it has found its way into many furniture projects, being used for drawer bottoms, cabinet backs and carcases. It can also be used as underlayment for floors, as it presents a clean, fine-grained finish.

Varnished, Virola plywood looks much like a variety of mahogany and at times is sold as if it were. This is especially true in Mexico, when used in their furniture business. As most people can’t truly tell the difference between the two woods, there is little risk of sellers calling it by the more common name of mahogany and getting away with it. Their customer base usually isn’t discerning enough to know the difference.

Virola plywood is seldom used for finish applications in the United States, but relegated to use for parts that are not seen. This is not as much from a sense of quality as one of style. Mahogany is largely out of style in the United States, so there is little interest in mahogany furniture. Mexico, on the other hand, likes mahogany, explaining its popularity there.

Although an inexpensive plywood, Virola is not poor quality. Sheets are typically void-free and the surface veneer has few knots. That makes this plywood usable for marine applications, specifically being used as the structure underneath fiberglass body panels. The plywood works well in such applications, as long as it is covered with the fiberglass resin.

Like Luan, Virola plywood can be difficult to cut. The fine grain splinters easily when crosscutting. Pre-cutting the outer veneer with a utility knife solves this problem, giving you pieces that are chip and splinter free. Virola is susceptible to fungi and dry wood borers. So it needs to be protected from being destroyed. When properly finished, either by painting or varnishing, the risk of these pests is eliminated.

When finishing, Virola doesn’t absorb an overabundance of varnish, like oak or other open-grained woods. However, it will tend to “fuzz” when finished. This means that sanding between coats is required, to remove the fuzz and provide a clean, smooth surface for the finish to be applied to. Once finished and dried, the fuzz does not return.