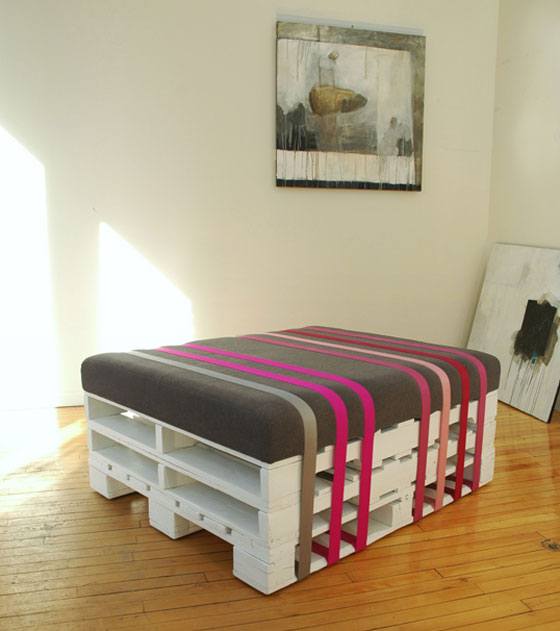 It seems you can’t hardly get online these days, without seeing someone’s project made from wood pallets. The great abundance of these shipping cast-offs makes for cheap, abundant material, which is readily adapted to a large number of rustic wood projects. Used pallets often have the aesthetic advantage of being well-weathered, which adds to the charm of anything made out of them.

Building out of pallets isn’t just an American fad either. There are many places in the world where pallets are used for projects. I’ve spent a fair amount of time in Mexico, where I’ve seen many fences made out of pallets.

Pallets provide cheap wood of a predictable size. And it’s not just any wood either. Many pallets are made of oak, which is much stronger than pine and usually more costly. But because it is rough-sawn oak and not sanded-four-sides (S4S), it ends up being quite cheap. Besides, the cost of the pallets is involved in using them for shipping; not in using used pallets for making furniture out of.

Where to Get Pallets

Many companies which receive palleted goods by truck will recycle those pallets, sending them back to the companies they buy from or using them in their own shipping. Still, there are a lot of places you can get pallets from, either for free or for a very low cost.

Every city has used pallet dealers who collect pallets from companies and then resell them to shippers. Many of the big box stores work this way, as part of their recycling program. They will have a contract with such a dealer, who hauls off all their pallets and pays them a per-piece fee for them. Taking pallets from a business which has such a contract qualifies as stealing, with the associated risk of arrest.

However, you can buy pallets from those dealers; many of whom sell their used pallets for a reasonable price. You can lower that price even more, if you are willing to accept less than perfect pallets. They always separate their pallets into the good, not so good, and trash piles. The not so good are less expensive and the trash pile consists of pallets that are unusable for shipping, even though they might contain plenty of good wood to use in projects where you would be taking the pallet apart anyway. Those trash pallets are usually free.

You can save yourself the cost of buying those pallets if you’re willing to invest some time and do some looking. Many stores receive merchandise on pallets, but don’t have a contract for the disposal of those pallets. This is especially useful with furniture stores and others who receive large items. As you are in various stores, ask them if they get palletized goods and what they do with the pallets.

Another such source, which might be even more fruitful, are the small warehouses which seem to spring up all over. I’m not talking about the ones you rent to store your camping gear or Christmas decorations; I’m talking about the ones which are for small businesses. They usually have an office in the front and a warehouse in the back.

The thing with these, is that you’ll have to go and talk with them during business hours to find out if they have any pallets and if they’re willing to give them to you. If you’re going to be making furniture out of pallet wood regularly, you might be able to work out a deal with several of these businesses, where you pick up their pallets and haul them off on a regular basis.

Finally, you can always check Craig’s list for pallets in your area. Every once in a while, someone will have a pile of pallets they want to get rid of, free, to the first person who will haul them off. These are usually the kind which the dealers would put in the trash pile, as they are unusable; but if you’re doing projects where you would be taking the pallets apart anyway, this is a great way to get a bunch for nothing more than sweat and gasoline. I’ll warn you though; they’ll want you to take everything, not just cherry pick their pile.

Ways to Use Pallets for Furniture

I suppose if you’re looking for the ultimate in simplicity, you can just stack up some pallets and call it a table; but most of us want something more than that. This means having to modify the pallets in some way. How you modify those pallets depends on what the project is that you’re trying to build. We can break those modifications down into three basic categories:

Many projects will require a combination of these methods. It’s always a good idea to keep whatever leftovers you have from a pallet you’ve cut down, disassembling those boards, so that you have them available for use.

Pallets are especially good for making furniture that will be used outdoors. The ruggedness of the oak that the pallets are made of, combined with the rough cut giving it a rustic look, makes for great patio furniture.

One of the easiest things to use pallets for is vertical gardening. This has grown in popularity in recent years, as both a decorative means and one for gaining better use of available space. That can be important on a patio, where you want to grow plants, but might not have a lot of room.

The secret to using a pallet as a vertical gardening planter is to turn each of the spaces in the top of the pallet into a planter box. To do this, you’ll need to add some boards on the inside of the pallet, converting each of the existing decking slats into a U. Then when you stand the pallet on end, you have several planter boxes, stacked one above another. Find a nice wall to put it against, or use the planter to be a half-wall, holding it in place with fence posts.

You’ll want to use a pallet for this which has a lot of space between the deck slats, so that you have plenty of space for the plants to grow up into. They will come out from those spaces, but need to grow up a little, before doing that.

A number of different types of storage shelves can be built out of pallets. One simple way is to cut pallets in half by cutting through the core supports. You’ll probably have to add an additional bottom stringer to do this, moving over the middle stringer slightly. This gives you ready-made shelves which are 2’x 4’. Stack cinder blocks at the ends to support the shelves.

If you want something more like bookshelves, you can turn the pallets around, putting the deck side towards the wall, with the supports horizontally. Then remove the bottom slats, allowing the supports to be the shelves. If you want wider shelves, scab on support pieces salvaged from other pallets. Shelves like this can be used effectively as bookshelves, for putting potted plants on or for displaying small knick-knacks.

Of course, if you take the pallets apart, you have boards which can be made into a more conventional shelving unit, either laminating them together to make wider boards, or using them individually, allowing a small gap between the boards.

The easiest sort of bench you can make out of pallets consists of a number of half-pallets, stacked up against the wall. Throw pillows against the wall can be used to give you a back to the bench.

Stepping it up a bit from there, use those same half-pallets, connecting them together with legs made from pieces salvaged from other pallets. Benches of this sort can be connected together, making a perimeter for your patio or a corner “sofa” for your patio.

If you want a good place to take a nap, take four pallets and stack them in stacks of two, side by side, up against the wall. Then find some large throw pillows to use as seat cushions and for a back rest.

chairs can be made much like benches are, except that the seat and back of the chair will each be one-quarter of a pallet. This means that you’re actually going to get a lot of scrap out of each pallet, as you won’t be able to use all four quarters. But that’s okay, as you can scavenge the rest of the wood for other projects.

There are many ways of making a table out of pallets, besides just stacking a couple of pallets on top of each other. Taking a good pallet and adding legs to it makes for a rough table, if you don’t need anything fancy.

For most tables, you’ll want to take the pallet apart and put it back together, as pallets typically have space between the slats. While that may be fine in some cases, you usually want a complete top on a table, without spaces for things to fall through. That means either adding strips to fill the gaps or reattaching the slats so that they are side-by-side.

One nice thing about this is that you can make the table top more interesting, either by using contrasting boards next to each other or even putting the boards at an angle. I remember seeing a table made out of a wood cable spool, where the top was covered with different boards from pallets, which had weathered to different colors.

If you want something really different, take a number of pallets apart and make a tabletop and end legs for it, by putting the pieces of wood on edge, rather than flat. Alternate the wood for the legs, with the wood for the top, like finger-joining, so that you have one piece of leg wood between every pair of slates used for the top. This will leave you with spaces in your top, but they will be only ¾” wide.