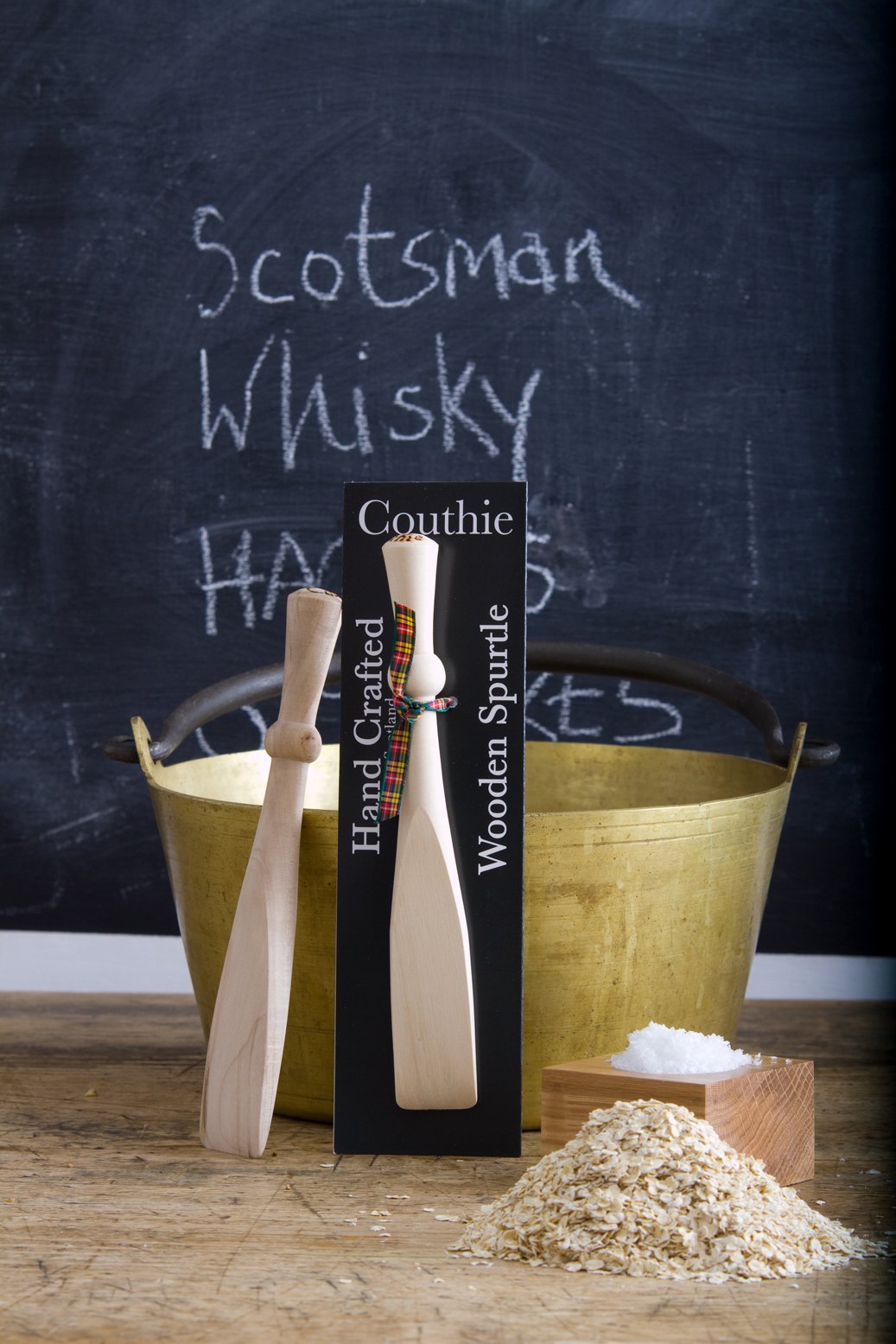 The Spurtle is a wooden kitchen utensil that originated in Scotland. As kitchen utensils go, it is one of the simplest ones in existence, yet performs a very specific purpose extremely well. While other utensils can and often are used in the place of the spurtle, they aren’t capable of performing quite as well as the spurtle can for its intended purpose.

So, just what is that purpose? The spurtle was developed specifically for cooking porridge without it becoming lumpy. If a wooden spoon is used for making porridge or oatmeal it tends to become lumpy. The cylindrical shape of the spurtle prevents this, as well as preventing the porridge from sticking to the utensil. When stirring with a spoon, the stirring action is more about scraping the porridge off the sides of the pot; but with a spurtle, it is more about mixing the porridge, almost like using a whisk. Some cooks will even beat it like a whisk while making porridge, ensuring that it doesn’t have a chance to become lumpy. While originally intended for use in making porridge, they are also useful for stirring broths and soups.

This raises the question whether wood utensils are safe for food, as the pores can trap and hold both food and bacteria. While that is true, the woods being used for making spurtles are woods with tight pores, which will not trap food easily, like oak would. Properly finished food is unlikely to get trapped in the wood and any bacteria trapped in the wood will die, due to lack of moist and food, when the spurtle is not in use. That’s assuming that the bacteria first manages to survive the heat of cooking long enough to get into the wood, which is unlikely.

There is also an American variant on the spurtle, which is somewhere between a spoon, a spatula and the original spurtle. This design consists of a long, flat stirring area, roughly 2” wide and 6” to 9” long. While a useful utensil, ideal for stirring a variety of things, the wider surface area, approaching that of a spoon, doesn’t make it as good for stirring porridge as a more traditional spurtle is.

Some American spurtles are now being made which are slightly concave, making them more like a long wooden spoon, than what they originally were. This concave surface has a high potential for porridge, oatmeal or cake batter sticking to it, unlike the original design. While I’m sure that there are cooks that swear by this design, it is different enough from the original so as to warrant being called by its own name.

It should be noted that the American version of the spurtle cannot be turned on a lathe, like the original can. It would need to be cut out on a scroll saw and then have the edges shaped by a router and sanding. While it is not difficult to make, it is not the same as making a traditional spurtle.

The spurtle is turned on the lathe, and is a very real, although simplified, application of spindle turning. As such, it is a great beginner’s project for the beginning wood-turner. The only thing to be of concern is that the surface needs to be extremely smooth so as to avoid any risk of splinters, either in the food or in the hand that wields the spurtle.

To turn a spurtle on the lathe, start out with a piece of 1” square hardwood, 12” to 14” long. Set it up between centers and turn the workpiece, first making it into a cylinder along its entire length. With that complete, the handle end is shaped. The more traditional shaping is to shape the handle end like a thistle flower, making a tapered section that flares out to the end, with a ball or bead just below it. However, in more modern times spurtle handles have taken on any number of forms, some of which are quite elaborate. Basically any round handle shape or design that can be thought of can be used for a spurtle.

In the process of turning, there is usually about ½” of material left on either end for the centers to attach to. Tapering and rounding of the ends is done, leaving these stubs in place. Once the turning is removed from the lathe, these ends are cut off with a fine-toothed crosscut saw and the ends of the utensil sanded.

It is important to sand the spurtle thoroughly, working down from 120 grit sandpaper through to about 400 grit, creating an extremely smooth surface.

Making a Spurtle without a Lathe

While the “proper” way of making a spurtle is to turn it on the lathe, they are simple enough that they can be made without one. The main reason the lathe is needed is to make the square piece of stock round; but that step can be bypassed by using dowel rods for the material. They’re a bit hard to find, but you can buy hardwood dowel rods made from a variety of different types of wood. The “normal” dowel rods that are available in home improvement centers are usually made of poplar, which is a fine and straight grained hardwood. So it should work for making a spurtle too.

The trick then is in shaping the dowel rod into a spurtle. This can be accomplished by whittling. After all, if people can whittle spoons, which are considerably more complicated, it shouldn’t be all that hard to whittle a thistle flower on one end and round the other end of the dowel.

Another option to consider is using a router table. I’ve done a number of projects where I needed to round over the end of a dowel rod rather precisely and found that a roundover bit on a router table works well for it. Other bits can be used for design work in the handle, using a miter gauge, in conjunction with the fence to rotate the dowel over the bit.

As a cooking utensil, varnish, lacquer, and epoxy should not be used on the spurtle. Instead, it is best to oil it. For the most part, mineral oil is the best oil for finishing, much like for finishing wood cutting boards. It will take two to three coats, which should be left to soak into the wood, before wiping the excess off.

For a smoother finish, apply beeswax over the mineral oil. This is most easily done by holding a block of beeswax up to the spurtle, with the lathe on at low speed. Friction will cause the beeswax to melt onto the wood, filling pores and coating the surface. Rub down the wax finish with a paper towel to ensure that it is smooth and that any excess wax is removed.