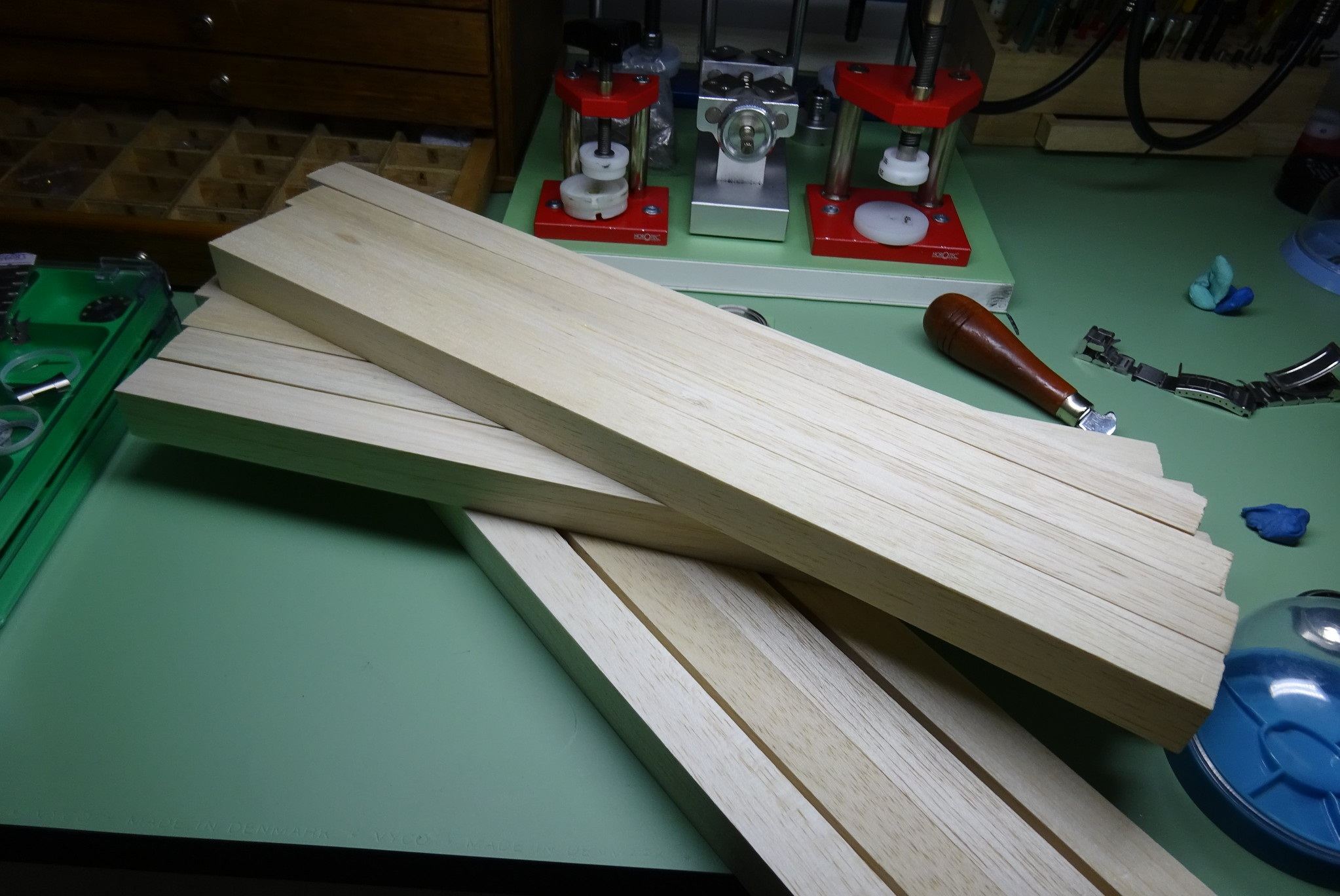 Balsa wood is one of the most unique types of wood on the market. Although it is technically considered to be a hardwood, it is both the softest and lightest wood that is commercially harvested and sold. Harvested from the Balsa tree, which grows throughout much of Central and South America, this wood actually has very little structural mass. The tree, which is usually harvested at 60 to 90 feet in height (and can grow higher) and as much as six feet in diameter, is held up predominantly by the high amount of water held in the wood’s cells. Trees reach a point where they are harvestable in as little as 5 years, with a maximum maturity of 15 years. After this point, the heartwood breaks down and becomes waterlogged and the sapwood becomes hard.

The Ochroma Pyramidale tree, otherwise known as the Balsa tree, is largely harvested by hand, using an axe to cut down the tree, in much the same way that lumberjacks worked long before chainsaws came to be. The felled trees are dragged to the water by oxen, where they are formed into rafts, for floating downstream to where they are converted to lumber.

Freshly cut balsa wood has a very high moisture content, in the range of 200% to 400%, requiring kiln drying of green timbers, before it is converted to usable boards. Due to this high moisture content, there is a high tendency for the wood to warp and twist while drying. Once it has been kiln dried to a 17% moisture content, over 4-1/2 months, it can be shipped to the finish mill, where it is converted into usable boards and sticks. While green wood warps, cups and twists easily when drying, once dried the wood is quite stable.

The resulting wood is extremely light, flexible (especially across the grain) and strong for its weight. Compared to other hardwoods it is relatively expensive, mostly due to the large amount of hand work that has to go into harvesting it and kiln drying it. While balsa is sold in ¾” thickness for use in making surfboards, it is mostly sold in thin sheets and sticks, for model building, along with some blocks for carving.

Balsa was first used commercially in the 1920s. At that time, it was first sought after to be used as a replacement for cork. It is highly buoyant; explaining why it was once a popular wood for making surfboards. It has also been used for packing material, almost like Styrofoam and as an insulating material. Seed fiber from the tree is used as stuffing for mattresses and cushions.

During World War II, balsa was used as the major structural material to build the British de Havilland Mosquito aircraft. This has been considered to be the best British aircraft made during World War II. Originally designed to be a light bomber, the plane was quickly adapted to other purposes, including as a submarine hunter. Its great advantage, speed and agility were at least in part due to its lightweight, thanks to balsa; but at the same time, it was balsa that was its downfall, as the airplanes would rot in the hanger, especially in the damp climate of the tropics.

But airplanes weren’t the only place that balsa was found to be useful; it was used for manufacturing boats as well. Today, some high speed wood boats are still made from balsa, laminated with a hardwood veneer. The combination of the hard veneer coating and the light core helps make boats which are tough, light and resilient to damage. The flexibility of the balsa is very good at withstanding the pounding of the waves on the boat.

But balsa wood found its real home in model building, more than anywhere else. This started in 1926, when a WWI US Navy aviator started building a line of model gliders and airplanes out of his barn. This grew into the Nu Craft Toy company. Balsa is used for both model airplanes and boats. Its lightweight, strength and flexibility make it the ideal material for model airplanes, which have to be able to easily withstand hard landings and crashes.

But that’s not the only kind of model building that balsa is used for. There are a wide range of professional model applications where it is used, such as architects building models of their proposed projects. Before computer modeling became so sophisticated, balsa models of bridges were used for stress testing of new bridge designs. Even the film industry uses balsa extensively, making both models and full-sized furniture out of it. A balsa wood chair is less likely to injure an actor when it is broken over his head and if he is knocked-down into a table made of balsa, it will collapse nicely under him, cushioning his fall.

Another interesting place where balsa wood is found is in the manufacture of string instruments. These require a lightweight, strong wood, which balsa fits the bill for perfectly. Being easy to shape, balsa can be made into ribs for the inside of everything from violins to guitars. It’s hard to tell, but many types of fishing lures are made with a painted balsa wood body.

While balsa wood is strong for its weight, it is not as strong as other types of wood. However, there are several ways of strengthen it, such as making plywood out of it. thin balsa wood plywood, as thin as 1/64” thick and as thick as 3” thick. As with any other plywood, balsa plywood is considerably stronger than balsa boards, although it can be quite expensive. Surprisingly, the thinnest balsa plywoods are the most expensive.

But there are things that the woodworker can do to make balsa wood stronger as well. One is to use a wood hardener on it. This is a liquid product designed for use on wood that is rotting, in order to protect that wood from further rot. It penetrates into the wood, where the hardener’s resins bind with the wood fibers, strengthen them.

To use wood hardener to strengthen balsa, it is best to immerse the balsa pieces in the hardener, holding them with tongs to ensure they get fully submersed. Hold the wood pieces there until they stop bubbling, and then remove them. At this point, the pieces can no longer soak up any more of the hardener. Set them on waxed paper to dry, flipping them over, as per the instructions on the container. Be sure to dry both sides evenly

Another method for strengthen balsa is to cut two mirror-image components out of material that is half the desired thickness. Then use epoxy to glue the two pieces together. Even though the grain on both pieces will be running the same direction, the addition of the epoxy layer will add strength to the finished part.

Even though balsa wood is considered a hardwood, it is really in a category all by itself. Using normal woodworking techniques on balsa will most likely create nothing but scrap, especially normal cutting techniques. Care must be taken with the wood, because of how soft it is.

Balsa should always be cut with a sharp knife, such as a hobby and crafts knife. The majority of the cutting is done with the tip of the knife, so be sure to check that the tip is sharp, before using. The blades of these knives can appear to be sharp, long after the tip has become dull, due to how much of their use involves cutting with the tip.

It is best to use a straight edge or other strong template as a guide to set the knife against when cutting. Do not apply too much pressure to the knife, but rather make the cut as a series of strokes, each one cutting farther through the wood. If too much blade pressure is applied, the wood fibers will crush, rather than cut.

Another place where pressure can cause problems is in clamping balsa wood. Due to the light density of the wood, it can crush easily, which means that normal clamping pressure will leave a mark on the wood’s surface. If clamps are needed, then place cauls over the sides of the wood to be clamped and then apply the clamps to the cauls, using no more than light pressure.

Normal PVA wood glue can be used for assembling balsa wood, as well as cyanoacrylate adhesives and epoxy. The cell structure of the wood makes it extremely easy to glue. When gap filling is needed epoxy is the best choice. In any of these cases, the adhesive is going to be considerably stronger than the wood itself.

Joinery is important when working with balsa, as the wood itself has limited strength. Mortise and tenon and lap joints are the most common methods used, both of which can be cut with the aforementioned hobby and craft knives.